Why Don’t We Ask the Afghanis What THEY Want? 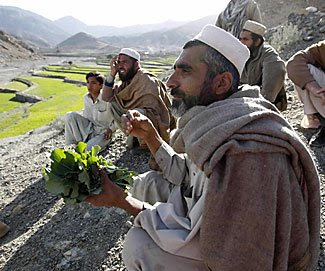 Like it or not: These farmers near Pakistan will see more US troops.
Photo: Oleg Popov/Reuters.
Many in Afghanistan oppose Obama’s troop buildup plans
By Anand Gopal / March 2, 2009

Frustration and fear is sparking opposition to plans that would nearly double the size of US forces there.

Kabul, Afghanistan – Parliamentarian Shukria Barakzai says she has an innovative amendment to Washington’s planned injection of up to 30,000 new troops here.

Ms. Barakzai is among the growing number of Afghans – especially in the Pashtun south – who oppose a troop increase here, posing what could be the biggest challenge to the Obama administration’s stabilization strategy.

“At least half the country is deeply suspicious of the new troops,” says Kabul-based political analyst Waheed Muzjda. “The US will have to wage an intense hearts-and-minds campaign to turn this situation around.”

The lack of public support could provide fertile recruiting ground for the Taliban and hinder US operations, Mr. Muzjda says.

After a year that saw the highest number of civilian and troop casualties since the war began in 2001, officials in Washington recently pledged to send 17,000 soldiers to stem the growing violence. The move has broad support among the American public – a recent ABC News/Washington Post poll found that 64 percent back the new deployments.

Much of the Afghan opposition comes from provinces dominated by the Pashtun ethnic group, which include areas that have seen the most fighting and where the new troops will be deployed. A group of 50 mostly Pashtun members of parliament recently formed a working group aimed at blocking the arrival of new troops and pushing for a bilateral military agreement between Kabul and Washington, which currently does not exist.

Although any proposed legislation or motion condemning the troop increase would be purely symbolic – the Afghan government does not have direct say over the operations of Western forces – observers say that the development is an important gauge of public opinion in Pashtun areas.

Dozens of interviews with tribal elders, parliamentarians who are not part of the working group, and locals in Pashtun areas have revealed similar sentiments.

“I can’t find a single man in the entire province who is in favor of more troops,” says Awal Khan, a tribal leader from Logar province, just south of Kabul. “They don’t respect our tradition, culture, or religion.”

“The majority of my people disagree with this increase,” says Hanif Shah Hosseini, an MP from Khost province who is not part of the working group. “More troops won’t bring more security, just an increase in the fighting.”

Many cite civilian casualties and house raids as the main reason for their opposition. Recently in Logar, armed locals blocked the highway into Kabul for hours, in protest of a night raid where US forces killed one and detained three others. According to local reports, the nearly 2,000 protestors burned tires and chanted anti-US slogans.

In Kandahar Province, villagers recently placed the bodies of two children who were killed by mines in front of a government office, shouting anti-Western slogans. They alleged that unexploded Canadian ordnance killed the children.

Many locals also fear the reprisals of the Taliban in areas where troops operate. Recently in Wardak Province, locals saw two boys practicing their fledgling English with American soldiers who were passing by. The Taliban later executed the children, accusing them of being spies.

Some feel that the US should focus its efforts solely on reconstruction and the building of Afghan security forces. “The Americans spend thousands of dollars every month on a single soldier,” says Khost MP Mr. Hosseini. “With this huge amount of money, they can train our soldiers more effectively.”

Others say that if the troops must come, they should coordinate with the Afghan government. “Without such coordination, I don’t think sending more troops will change anything,” says Kandahar tribal leader Agha Lalai Dastageri.

He adds that if troops were under the control of the Afghan government, they would be deployed near the Pakistani border and away from populated areas, diminishing the chance of civilian casualties. Many Afghans believe that the source of insecurity partly lies in Pakistan, where the leadership of the insurgency allegedly takes refuge, and that policing the border will improve security throughout Afghanistan.

American military officials say that although the goal is to eventually transfer all security responsibilities to Afghans, troops are still needed now for development and security. “Our intent is to use the troops to secure rural areas,” says Capt. Elizabeth Mathias, spokeswoman for US forces in Afghanistan. “The Afghans are showing great promise, but they need us here for now.”

The injection of forces still enjoys support outside the Pashtun belt. Other ethnic groups, such as the Tajiks and the Hezaras, who predominantly hail from the country’s relatively peaceful north and west, back the notion. “We need these troops to strengthen security in the unstable provinces,” says Mirwais Yassini, chair of the Afghan Parliament and a Tajik. “We also need them [to provide security] for the upcoming presidential elections.”

Support for more troops is higher in the non-Pashtun areas because residents there have experienced less violence, and because they may view US forces as a buffer between them and the Taliban, analysts say. The memory of the Taliban’s harsh rule is still fresh in many non-Pashtun communities, who suffered greatly during that time.

But winning support in the rural Pashtun villages, where the war is being fought, is crucial for the plan, analysts say. Development will be a key component to this war. Military planners intend to continue focusing on projects meant to boost economic activity, which they say will show locals the benefits of US presence in the region.

“A couple of months ago Arghasan district in Kandahar was controlled by insurgents,” says Kandahar provincial council member Hajji Qasim. “But ever since USAID started a road project there, the economic situation improved and the insurgency lost influence.”

Military officials say that such development projects can only succeed if they are accompanied by a corresponding troop increase, since insurgents often attack reconstruction teams.

Officials in Washington and Pashtun villagers agree on one thing: They expect the violence to increase this summer as the new forces attempt to root out insurgent strongholds.

“I know once the snows melt, things will start to get much worse,” Logar resident Nasar Ahmad says. “The fighting will be intense, and a lot of us villagers are talking about fleeing to Kabul.”

“We are worried our families will be caught in the middle,” he adds.

This entry was posted in RagBlog and tagged Afghanistan, Barack Obama, The Surge, U.S. Military. Bookmark the permalink.