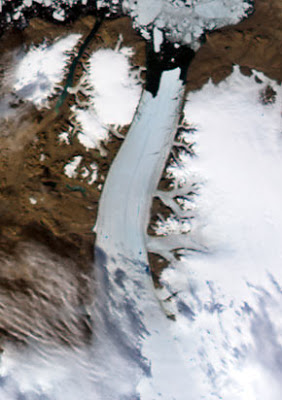 A massive crack in Petermann Glacier in Northern Greenland has at least one scientist predicting that a big part of the Northern Hemisphere’s largest floating glacier will be gone within a year. Photo: Byrd Polar Research Center / AP
Greenland Glacier Shows Giant New Crack
By Seth Borenstein / August 23, 2008

WASHINGTON — In northern Greenland, a part of the Arctic that had seemed immune from global warming, new satellite images show a growing giant crack and an 11-square-mile chunk of ice hemorrhaging off a major glacier, scientists said Thursday.

And that’s led the university professor who spotted the wounds in the massive Petermann glacier to predict disintegration of a major portion of the Northern Hemisphere’s largest floating glacier within the year.

If it does worsen and other northern Greenland glaciers melt faster, then it could speed up sea level rise, already increasing because of melt in sourthern Greenland.
The crack is 7 miles long and about half a mile wide. It is about half the width of the 500 square mile floating part of the glacier. Other smaller fractures can be seen in images of the ice tongue, a long narrow sliver of the glacier.

“The pictures speak for themselves,” said Jason Box, a glacier expert at the Byrd Polar Research Center at Ohio State University who spotted the changes while studying new satellite images. “This crack is moving, and moving closer and closer to the front. It’s just a matter of time till a much larger piece is going to break off…. It is imminent.”

The chunk that came off the glacier between July 10 and July 24 is about half the size of Manhattan and doesn’t worry Box as much as the cracks. The Petermann glacier had a larger breakaway ice chunk in 2000. But the overall picture worries some scientists.

“As we see this phenomenon occurring further and further north — and Petermann is as far north as you can get — it certainly adds to the concern,” said Waleed Abdalati, director of the Center for the Study of Earth from Space at the University of Colorado.

The question that now faces scientists is: Are the fractures part of normal glacier stress or are they the beginning of the effects of global warming?

“It certainly is a major event,” said NASA ice scientist Jay Zwally in a telephone interview from a conference on glaciers in Ireland. “It’s a signal but we don’t know what it means.”

It is too early to say it is clearly global warming, Zwally said. Scientists don’t like to attribute single events to global warming, but often say such events fit a pattern.

University of Colorado professor Konrad Steffen, who returned from Greenland Wednesday and has studied the Petermann glacier in the past, said that what Box saw is not too different from what he saw in the 1990s: “The crack is not alarming… I would say it is normal.”

However, scientists note that it fits with the trend of melting glacial ice they first saw in the southern part of the massive island and seems to be marching north with time. Big cracks and breakaway pieces are foreboding signs of what’s ahead.

Further south in Greenland, Box’s satellite images show that the Jakobshavn glacier, the fastest retreating glacier in the world, set new records for how far it has moved inland.

That concerns Colorado’s Abdalati: “It could go back for miles and miles and there’s no real mechanism to stop it.”