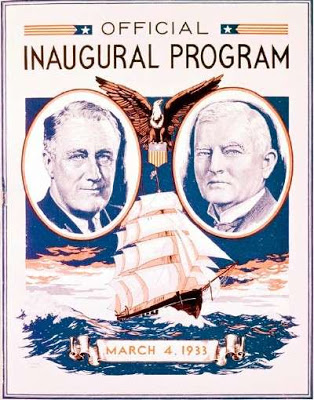 ‘Misery and insecurity exist to a degree unprecedented in our national life. And spiritually the American people have been debauched by the materialism which made dollar-chasing the accepted way of life and accumulation of riches the goal of earthly existence.’

In March, 1933, The Nation Magazine published the following editorial (emphasis mine):

For twelve years the Republican Party has been in power. During ten of those years it controlled the executive and legislative branches of the government. When, a few years hence, an attempt is made to minimize the disaster of this last quadrennium, and to point to a preceding eight year period of material development and growth, let it be noted that in a purely material sense the American people are much worse off today than they were twelve years ago. Far more than was gained has been swept away. Savings have been dissipated, lives have been blasted, families disintegrated.

Misery and insecurity exist to a degree unprecedented in our national life. And spiritually the American people have been debauched by the materialism which made dollar-chasing the accepted way of life and accumulation of riches the goal of earthly existence. The record of Republicanism must be judged as a whole, although, in fairness, the consequences of the World War and the major responsibility of the Democrats for putting the United States into it must not be forgotten. […]

Moreover, economic disaster has been only a part of this sterile decade’s legacy, the burdens of which will descend to unborn generations. Our worthiest traditions have been impaired; vital tenets of American life have been destroyed. What has become of that fundamental American axiom “salvation by work”? In all our previous history it has been taken for granted that ours was a land of opportunity, and that rewards bore some relation to initiative, effort, and ability. Granting the large mythical content of these beliefs, they were more nearly valid in America in the first century and a half of our national existence than anywhere else on earth. They are no longer true today. The promise of American life has been shattered — possibly beyond repair. […]

Behind the Administration facade, capped by the genial and banal Harding, the insignificant Coolidge, and the erstwhile superman, Hoover, have been the real rulers of America [ed.: there follows a long list.] It was a Grand Old Party — for them — while it lasted. Makers and beneficiaries of our politico-economic system, these are the men whose failure is now written large in the towering empty edifices that scrape the New York sky, in the hundreds of thousands of “For sale” and “To let” signs which adorn our cities, in the closed banks, in the foreclosed farms, in the whole picture of devastation which has come under their rule.

Have these captains and kings departed — not to return? The epoch of their wanton and repulsive leadership is ending. Their incompetence and their betrayal are manifest. But much of the evil they have done lives after them. The coming years will see the struggle to purge America, to reassert the promise of American life, to validate, in consonance with the changed times and conditions, the high aspirations of the founders of the nation.

Mr. Roosevelt has the opportunity to be the leader of this renaissance, but he will have to forge as his instrument a wholly different Democratic Party from that which so long has been indistinguishable from the Republican.