A Backyard Hawk on Wildlife Wednesday

Another picture with a story. I met Emily in 1964 when I was 13 and she was 12. Our Dads were working on a high school textbook and we were staying in the same apartment block in Boulder, Colorado. She lived in Arlington, Virginia, I in Austin. Being kids, we sort of decided to be girlfriend and boyfriend, but in the course of a seven-year correspondence, fell in love. We lost touch in about 1970, but never forgot each other, and Emily tracked me down in May 2005 just us some rather traumatic stuff was happening in my life.

She lives in Boston now, so this is an east-coast hawk. Unfortunately, neither of us knows what species it is. Richard Jehn 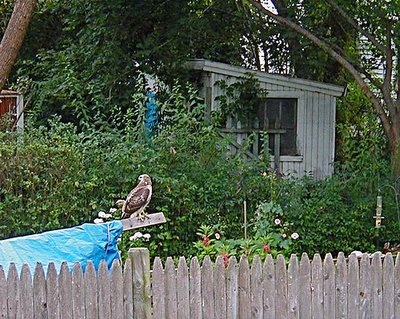