A Counterweight to the Northern Imperial Power 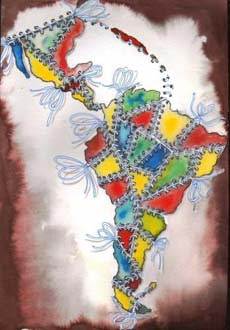 BRASILIA, Brazil — A new South American union was born Friday as leaders of the region’s 12 nations set out to create a continental parliament.

Some see the new organization, Unasur, as a regional version of the European Union. Summit host Brazil wants it to help coordinate defense affairs across South America and Venezuela’s Hugo Chavez calls it a counterweight to the United States.

“The number one enemy of the union of the south is the empire of the United States,” Chavez said after arriving in Brazil’s capital. “It’s very elementary: divide and conquer.”

The socialist crusader said the United States was “trying to generate wars in South America and tries to halt advances in the this project.”

Brazil’s president, Luiz Inacio Lula da Silva, invited other Latin American and Caribbean nations to join the venture. “Unasur is born, open to all the region, born under the signs of diversity and pluralism,” he said.

But South American leaders still found their own reasons for division.

Unasur’s first secretary-general, Rodrigo Borja, resigned Thursday, before the organization was formally born. He complained that some leaders had balked at his vision of putting other regional trade blocs, including Mercosur and the Andean Community, under Unasur’s authority.

The union’s inaugural meeting was moved from Colombia after that nation raided a guerrilla camp in Ecuador, sparking a crisis in regional relations. The gathering, now in Brasilia, is meant to formally establish an organization first proposed at a 2004 summit in Peru.

South America’s economy is expected grow by 4.7 percent this year, according to the U.N.’s Economic Commission on Latin America. It grew 5.7 percent in 2007, when foreign direct investment reached a record US$106 billion (euro72 billion) as global demand for the region’s natural resources soared.

This entry was posted in RagBlog and tagged Latin America. Bookmark the permalink.