A New Blog with a Clear Purpose 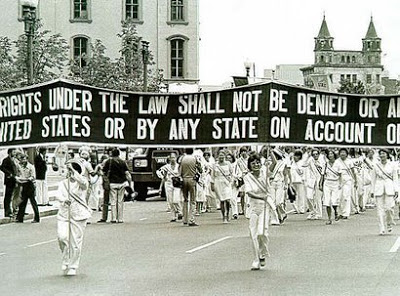 I don’t support Sarah Palin as a candidate for Vice President because I don’t want my grandchildren to live in a nation that, in accordance with her political views, would deny them environmental protection and alternative energy development or sex education, and a right to chose. The last administration has shown us how effective the VP can be in circumventing the Constitution.
-Juanita L., 61, Lancaster, PA

Sarah Palin may be a mother and she may be a fighter, but she is fighting for herself, not for us. She will take out others for her own interests and beliefs whether or not they reflect our needs. From trying to ban books to firing people who disagree with her, to being part of a secessionist group in Alaska – Sarah Palin is a self-serving religious fundamentalist who would rather spend state money and time on personal feuds than governing for the good of all. Her extreme beliefs regarding abstinence-only education did not work even for her own daughter! and yet she wants to force it on our daughters! We will not have it. We can do better, there are stronger, more thoughtful and fair minded women in this country who are fit to run it.
-Aquene F., 26, Milwuakee, WI

If the Republican ticket wins, our country would be effectively destroyed in terms of our economy, the direction of the Supreme Court, and the elimination of rights we currently hold dear.
We need to prevent this woman from pretending to be a voice for women and realize she is just a shill for the far right.
-Andrea D., 45, Rogers, Arkansas

I am completely offended by the idea that today’s woman would vote for Sarah Palin on the basis of her gender. I supported Hillary because she was the strongest and most qualified candidate for President, and would never equate her with Sarah Palin. Her positions on the key issues of the day are uninformed and ill-advised, and I will do whatever I can personally to make sure she does not become the VP of the United States. Her nomination is appallingly negligent on the part of the Republican party. Big surprise.
-Angela L., 45, Austin, TX

I am appalled at the thought of Sarah Palin in the No. 2 spot in this country. McCain says he wants ‘change,’ but his downright hypocrisy in choosing her is shining through. McCain has finally, openly, shown his disdain for the intelligence of the American woman, and surrendered his vaunted maverick title to the Bush/Cheney/Rove ultra-Conservatives.
Does McCain really think that the women of America will vote for a Sarah Palin who agrees with those policies and worse, just because she’s a woman???
-Portia D. (I’m 76, and thought I’d seen the worst in all these years. Wrong!), Staten Island

We have nothing against Sarah Palin, but it is inconceivable that the Republicans have chosen her instead of other qualified women as a Vice-Presidential candidate, if in so doing, they were trying to make history, they may well do it with frightening consequences.
-Sophia G., 53, Norwalk, CT

I oppose Sarah Palin because she is John McCain’s running mate. John McCain, the man who laughed when one of his supporters called Hillary Clinton a b*tch. The man who has promised to nominate extreme right-wing judges to the Supreme Court. It doesn’t matter what Sarah Palin stands for (though in fact she stands with McCain on these issues), because you wouldn’t be voting for Palin for president, you’d be voting for McCain.
-Janet L., 44, Palo Alto, CA

I am a 53 year old woman living in Illinois. I oppose Palin as a V.P. because I believe she represents a move backward, not forward. America needs to shift our approach to meet the challenges. We face a strong China, a growing India and an energy crisis. We need to get out of Iraq. We need a health care system that works for all. We can not use a 1950’s mentality of shoot first ask questions later. We can not just keep talking about Vietnam- new world order is here- we’ve got to move forward not backward.
-R.M., 53, IL

Is Ms.Palin really the best the Republican party has to offer in terms of a female? I guess there are slim pickings for a woman who will support an antiquated and sexist Republican agenda. Please know that Hillary supporters supported her for more than being merely biologically female. The women who have supported Hillary Clinton did so because of her track record, experience and progressive platform, not because she was simply “a woman”. Typical interpretation from a party that is clearly a boys club.
-Kristen C., 30, Los Angeles

I say no to Palin because I want all children to be able to attend public schools where the teachers are well paid and trained. I want everyone to have access to health care. There’s nothing I think is more crucial, yet this woman and her party disagree.
-H. A., 36, Northampton, MA

I remember the days of back room abortions. And I want the government out of my private business.
-Carole B., SC

She represents nothing but repressive ideas of education, family, government and the US as a part of an International community. The cruel irony of Senator Clinton blooding herself on that glass ceiling only to have a puppet escorted through on the arm of a warrior…
Get out and vote.
Kay J., 57, NYC