A Prince of a Man – P. Crassnerd

A Prince of a Man — How George Bush Protects US Troops in Iraq: Commentary by Paul Crassnerd
01/15/07
Baghdad

I have always been puzzled as to what, exactly, was the force powerful enough to detain a warrior as magnificent as George W. Bush from his undoubtedly chain-bursting desire to take the formidable combat skills he gained in the Alabama National Guard and on the deck of the USS Lincoln in San Diego harbor and use them without delay or mercy against the terrorist enemies of Freedom and of Our Nation, in embattled Iraq.

Fortunately, though my ignorance on that question has heretofore been encyclopedic and despicably gross and all-encompassing, I today have come across an article in the British press, of all places that has engendered in me a secular epiphany of no small measure, and cleansed the doors of my perception on the matter with the force of a fire hose in the hands of the infamous Sheriff Bull O’Connor.

Yes, it was nothing less than a news story in the British Press that is responsible for the disabusement of my previous ignorance on this matter. In gratitude to the cosmos that was so generous as to provide me with such enlightenment, I have decided today to share this information with my readers.

It seems that a current discussion of some import in the British Isles — once the home of an empire on which the sun was said never to set, but upon which great grief did later sit sunning, is the matter of the military deployment of one young lad named Prince. This, however, is not the famous Artist Formerly Known As Prince, though the two individuals do share the same first name of Prince. No, this lad’s last name is Harry. That is, Prince Harry.

Prince Harry
Oh, perhaps he has another last name as well, but that is another story for another time. What is important here is that all of Britain is discussing whether Prince Harry, a recent grad of Sandhurst Military Academy there in the formerly Great — and now merely Holding-Its-Own — Britain, should be deployed to Iraq.

His “unit” — that is, the soldiers he has been training to command, apparently are headed for that troubled and currently quite sadly benighted land to provide …. to provide ….. well, to provide whatever it is British soldiers provide these days in their old colonial lands, perhaps mainly combat opportunities at the very least, one might think, for the young, restless, and testosterone-overcharged males among the populace of the Misty Isles who still think it either appropriate or unavoidable that they visit such lands guns in hand even with certain purposes and likely accomplishments somewhat in debate, decline, or doubt.

So far, so good. But soft! What light through yonder widow breaks?

Well, it is the light of a needed rhetorical question. And that question is, “Should Prince Harry be deployed along with his unit?”

Say what? Should a car be deployed without its driver?

But there is nothing like the right framing to produce a debate that will result in the right answer. Karl, have you moved to London? Are the Roves originally British?

It seems that the question must be debated, because, you see, Prince Harry is third in line for the British Crown. 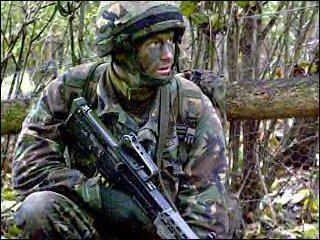 Prince Harry, seen here in action during military training, graduated from Sandhurst Military Academy in April and is training for possible deployment to Iraq.

Now, obviously, if one is third in line for something, there is someone who is second in line, and that person is ahead of the third one, and there is a fourth still farther on, and so on. So it may seem that that alone — being in line for the crown — is no reason to visciously and heartlessly deny Prince Harry the privilege of commanding, as Grace Slick might have put it, “his very own tanks.” In fact, “eleven soldiers and four Scimitar tanks,” according to British news reports. After all, no one in line is pushing these days, and the Queen likely would push back if there were anyway, so it’s not as if he is going to be needed immediately at the head of the line. Besides, his older brother is there, ahead of him. The Crown Jewels are well protected.

But so, then why not send the selfless and undoubtedly courageous young and hot Prince Harry? On to Baghdad with you, then, Prince!

Not so fast. Sure, as a Prince, Prince Harry may stand to gain something — some little bit: a castle, perhaps, a cut of the treasury, a baronry, whatever, from whatever booty the Brit army might bring home from Iraq, whether it’s oil, or just military supply contracts for its business leaders or some other plunder. Prestige, perhaps.

So then, you might wonder: WHAT IS KEEPING PRINCE HARRY? Why does he not charge forth to lead his men to glory? We know he is no coward: he has endured long hours with bad makeup (see training photo) and baggy clothes. He has gone into mud — wet dirt, no less — with no valet in sight and no sight in the dark other than night vision goggles. He has endured entire weekends without television or soccer. He went to a school WITH NO CHOCOLATE ICE CREAM, for Chrissakes!! And lived!! What, then, could be strong enough to keep him from his passionate desire to fulfill his duty and his destiny by leading the leaderless in Iraq? Could it be a threat by Iranians — who must fear him greatly — that they will nuke London if he so much as crosses the English Channel headed south? Are Argentine terrorists threatening to give the Falklands to Paris Hilton? Has Kim Il Jung (remember him?) threatened to nuke Cornwall and its famous pineapples?

Okay, let me just blurt it out, this thing that keeps the noble Prince Harry from the war thing, up-close and personal: it is his undying concern (well, bad choice of words where Iraq is concerned, perhaps, but his concern, at any rate), for others who might be endangered if he were present! YES! There can be, as Tony Blair himself might have said, “no doubt” that that is the reason the magnificent leader Prince Harry must restrain himself from charging ahead to lead his men into the breech, into the battle, into glory for Britain and The West, even if he does go to Iraq, as George Bush has so valiantly gone to Baghdad’s own Green Zone. Yes, friends, here is the actual quote from a British Military Authority:

“The Defense Ministry has previously said Harry could go to Iraq if his unit was deployed, but he might be kept out of situations where his presence would jeopardize his comrades.”

In other words, when Prince’s 11 bold men and four Scimitar tanks are out on the streets of Baghdad, being bullet magnets and bomb targets, it must be the Prince’s regretful duty to remain behind, lest he endanger them.

NOW do you flaky pinko creeps understand why Our Fearless Leader George W. Bush has had to limit his forays into the battle zone and restrict himself, painfully and regretfully “no doubt” to occasionally eating turkey dinner in the enlisted men’s mess hall in the Green Zone?

I sure hope so. Not out of the cowardice — or good sense — that led him to serve his time during the Vietnam war by helping in a Southern (America) congressional district office, when he could be found in uniform anywhere at all, which was not often and not at all in the last 6 months of his “duty”. Not out of the overabundance of concern for our nation’s Executive Branch that led him to duck, cover, and disappear when My Pet Goat turned into Fire in the Sky. Not out of the kind of spineless flight that found him unfindable in the floodwaters of Hurricane Katrina. NO. Out of love for his soldiers.

You SHOULD! Shame on all of you who ever doubted George Bush.

Don’t expect much. You won’t see George Bush there with you, rough-riding a Humvee through the blood-slicked streets of Baghdad.

But at least you’ll know why. He doesn’t want to endanger the lives of his soldiers.

Thank goodness for that, huh?

What a man! What a hero! What a President!