A Rush from the Past : The Hammering of ‘Jabber the Nut’ 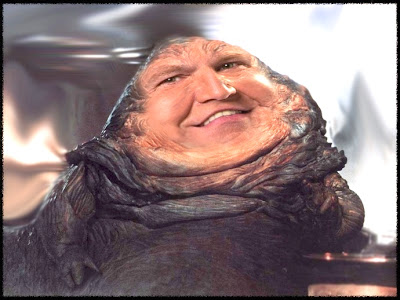 Graphic by Larry Ray / The Rag Blog (with apologies to Jabba and friends).
Rush Limbaugh: The Hammering of ‘Jabber the Nut’

Rush Limbaugh, during his brief and disastrous run as a TV talk show host in 1990, was hammered by his audience on one show to a point that he was forced to halt taping. Less than a minute after he started, his audience became so outraged at his mean spirited attacks on women that he literally couldn’t get a word in edgewise. Audience members repeatedly got in his face, refusing to be be intimidated by his bluster. Taping was stopped after the shouting, jeering audience ultimately reduced Rush to a red-faced mumbling wimp. Show producers finally were forced to clear the studio in order for Rush to be able to finish the segment.

With Rush challenging President Obama to debate him, the video clip below of a much younger Rush Limbaugh, shows how he actually holds up when he is not totally alone, unopposed, shouting into a microphone in his radio studio.

After the corpulent, “Jabber the Nut” shook like a ton of jelly speaking before the Conservative Political Action Committee a couple of weeks ago, it is delightful to see him hooted off his own stage before a real audience.

From the video archives, the “Hammering of Jabber the Nut” is presented below for your viewing pleasure . . . he makes it almost exactly one minute before the attack begins.

3 Responses to A Rush from the Past : The Hammering of ‘Jabber the Nut’