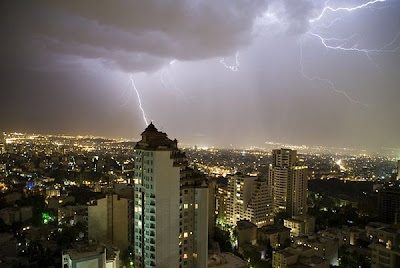 Lightning over Northern Tehran
British fear US commander is beating the drum for Iran strikes
By Damien McElroy / The Telegraph / April 4, 2008

British officials gave warning yesterday that America’s commander in Iraq will declare that Iran is waging war against the US-backed Baghdad government.

A strong statement from General David Petraeus about Iran’s intervention in Iraq could set the stage for a US attack on Iranian military facilities, according to a Whitehall assessment. In closely watched testimony in Washington next week, Gen Petraeus will state that the Iranian threat has risen as Tehran has supplied and directed attacks by militia fighters against the Iraqi state and its US allies.

The outbreak of Iraq’s worst violence in 18 months last week with fighting in Basra and the daily bombardment of the Green Zone diplomatic enclave, demonstrated that although the Sunni Muslim insurgency is dramatically diminished, Shia forces remain in a strong position to destabilise the country.

“Petraeus is going to go very hard on Iran as the source of attacks on the American effort in Iraq,” a British official said. “Iran is waging a war in Iraq. The idea that America can’t fight a war on two fronts is wrong, there can be airstrikes and other moves,” he said.

“Petraeus has put emphasis on America having to fight the battle on behalf of Iraq. In his report he can frame it in terms of our soldiers killed and diplomats dead in attacks on the Green Zone.”

Tension between Washington and Tehran is already high over Iran’s covert nuclear programme. The Bush administration has not ruled out military strikes.

In remarks interpreted as signalling a change in his approach to Iran, Gen Petraeus last week hit out at the Iranian leadership. “The rockets that were launched at the Green Zone were Iranian-provided, Iranian-made rockets,” he said. “All of this in complete violation of promises made by President Ahmadinejad and the other most senior Iranian leaders to their Iraqi counterparts.”

The humiliation of the Iraqi prime minister Nouri al-Maliki by the Iranian-backed cleric Moqtada al-Sadr in fighting in Basra last week triggered top-level warnings over Iran’s strength in Iraq.

Gen Petraeus and Ryan Crocker, the US ambassador to Baghdad, will answer questions from American political leaders at the US Congress on Tuesday and Wednesday before travelling to London to brief Gordon Brown.

The Wall Street Journal said last week that the US war effort in Iraq must have a double goal.

“The US must recognise that Iran is engaged in a full-up proxy war against it in Iraq,” wrote the military analyst Kimberly Kagan.

There are signs that targeting Iran would unite American politicians across the bitter divide on Iraq. “Iran is the bull in the china shop,” said Ike Skelton, the Democrat chairman of the Armed Services Committee. “In all of this, they seem to have links to all of the Shi’ite groups, whether they be political or military.”

Today the London Telegraph reported that “British officials gave warning yesterday that America’s commander in Iraq will declare that Iran is waging war against the US-backed Baghdad government. A strong statement from General David Petraeus about Iran’s intervention in Iraq could set the stage for a US attack on Iranian militiary facilities, according to a Whitehall assessment.”

The neocon lacky Petraeus has had his script written for him by Cheney, and Petraeus together with neocon warmonger Ryan Crocker, the US governor of the Green Zone in Baghdad, will present Congress next Tuesday and Wednesday with the lies, for which the road has been well paved by neocon propagandists such as Kimberly Kagan, that “the US must recognize that Iran is engaged in a full-up proxy war against it in Iraq.”

Don’t expect Congress to do anything except to egg on the attack. On April 3 the International Herald Tribune reported that senators and representatives have made millions of dollars from their investments in defense companies totaling $196 million. Rep. Ike Skelton, the Democrat chairman of the House Armed Services Committee, is already on board with the attack on Iran. The London Telegraph quotes Skelton: “Iran is the bull in the china shop. In all of this, they seem to have links to all of the Shi’ite groups, whether they be political or military.”

All Skelton knows is what the war criminal Bush regime tells him. If Iran really does have all these connections, then it behooves Washington to cease threatening Iran and to make nice with Iran in order to stabilize Iraq and extract the US from the nightmare.

Reporting from Tehran on April 4, Reuters quotes Mohsen Hakim, whose father, Abdul Aziz al-Hakim, leads the Supreme Islamic Iraqi Council, an ally of the Maliki US puppetgovernment in Iraq: “Tehran, by using its positive influence on the Iraqi nation, paved the way for the return of peace to Iraq and the new situation is the result of Iran’s efforts.”

Instead of thanking Iran and working with Iran diplomatically to restore stability to Iraq, the Bush regime intends to expand the nightmare with a military attack on Iran. Ryan Crocker was quick to dispute Hakim’s report that Iran had used its influence to end the fighting in Basra. Crocker alleged that Iran had started the fighting. The absurdity of Crocker’s claim is obvious as even the neocon US media reported that the fighting in Basra was started by the US and Maliki in an effort to clear out the Shi’ite al-Sadr militias. Most experts saw the attack on al-Sadr for what it was: an effort to remove a potential threat to the US supply line from Kuwait in the event of a US attack on Iran.

Crocker alleges that the rockets dropping on the Green Zone during the Basra fighting were made in 2007 in Iran. As should be obvious even to disengaged Americans, if Iran were to arm the Iraqi insurgency, the insurgents would have modern weapons to counter US helicopter gunships and heavy tanks. The insurgents have no such weapons. The neocon lie that Iran is the cause of the Iraqi insurgency is just another Bush regime lie like the lie that Saddam Hussein had weapons of mass destruction and connections to al Qaeda and the lie that the Taliban in Afghanistan attacked the US.

The Bush regime will tell any lie and orchestrate any event in order to “finish the job” in the Middle East.

“Finishing the job” means to destroy the ability of Iraq, Iran, and Syria to provide support for the Palestinians and for Hezbollah in southern Lebanon against Israeli aggression. With Iraq and Iran in turmoil, Syria might simply give up and become another American client state. With Iraq and Iran in turmoil, Israel can steal the rest of the West Bank along with the water resources in southern Lebanon. That is what “the war on terror” is really about.

The entire world knows this. Consequently, the US and Israel are essentially isolated. The US can only count on the support that it can bribe and pay for.

At the NATO-Russian summit in Bucharest, Romania, on April 4, Russian President Putin said: “No one can seriously think that Iran would dare attack the U.S. Instead of pushing Iran into a corner, it would be far more sensible to think together how to help Iran become more predictable and transparent.”

Of course it would, but that is not what the warmonger Bush regime wants.

Perhaps the British government has derailed the plot to attack Iran by leaking in advance to the London Telegraph the disinformation Cheney has prepared for Petraeus and Crocker to deliver to the complicit US Congress next Tuesday and Wednesday. On the other hand, the US puppet media is likely to bury the real story and to trumpet Petraeus claims that Iran has, in effect, already declared war on the US by sending weapons to kill US troops in Iraq.

By next Thursday we will know from how the Petraeus-Crocker dog and pony show plays in the US Congress and media whether the Bush Regime will commit yet another war crime by attacking Iran.

Paul Craig Roberts a former Assistant Secretary of the US Treasury and former associate editor of the Wall Street Journal, has been reporting shocking cases of prosecutorial abuse for two decades. A new edition of his book, The Tyranny of Good Intentions, co-authored with Lawrence Stratton, a documented account of how Americans lost the protection of law, is forthcoming from Random House in March, 2008.

This entry was posted in RagBlog and tagged Middle East. Bookmark the permalink.