Aaron Schnautz :
METRO | ‘The Challenger’ is a newspaper published by Austin’s homeless

Since they have no office, staff meetings are held under a giant oak tree in front of City Hall. 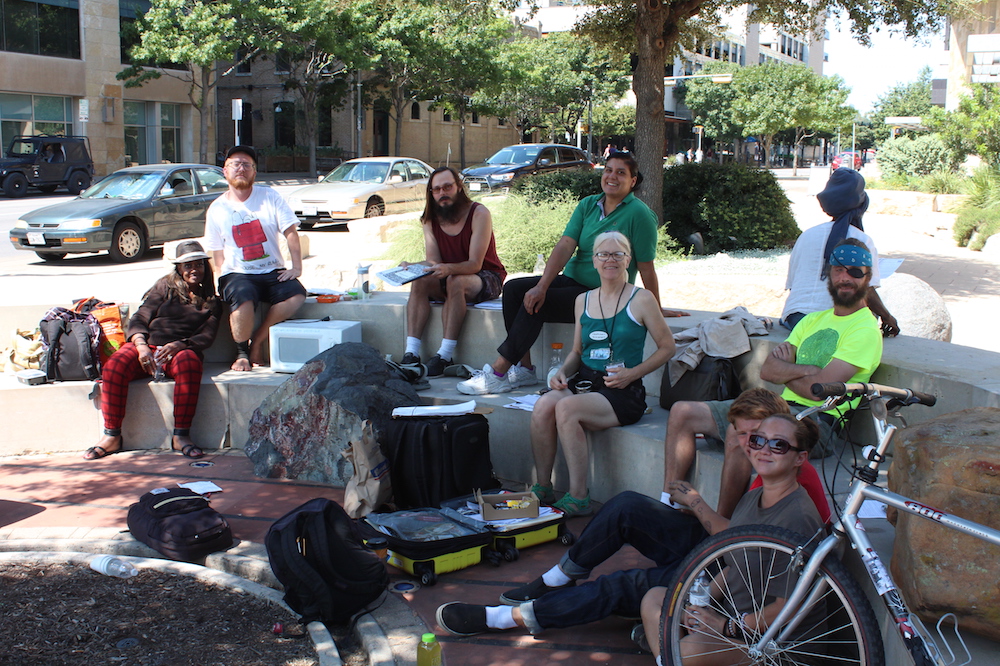 Every Sunday Challenger staffers gather to discuss stories for next week’s issue. Photo by Aaron Schnautz / The Rag Blog.

AUSTIN — At the corner of Guadalupe and Cesar Chavez streets in downtown Austin, there is a giant oak tree in front of City Hall that offers a shady resting place — and a place to watch the bustling city spring to life. Hundreds of cars, including a number of shiny Porsches and BMWs, pass by, many with the windows down and the music up. Joggers aim for the paths along Lady Bird Lake and impatiently wait for the traffic lights to change. Families pop in and out of the nearby boutiques.

But this oak tree isn’t just a great vantage point to watch Austin and its citizens, it also provides something else: Every Sunday afternoon it becomes a meeting place for people publishing a special newspaper — one produced by Austin’s homeless population.

The Challenger ‘contributes, informs, and connects diverse people from all walks of life.’

One study earlier this year found there to be almost 2,000 homeless people in Austin at any one time, and it is an audience that editor Valerie Romness and her Challenger Newspaper try to reach with a self-described “street newspaper.” Created in 2011, its goals are spelled out on the front page: The Challenger “contributes, informs, and connects diverse people from all walks of life.”

Run by homeless people and their advocates, street papers provide an outlet to writers and artists to express their talents. They also create readily available jobs for people looking to get back on their feet. At The Challenger, homeless people can buy copies of the paper, usually for 25 or 50 cents, and then offer it to passersby for a recommended $2 donation. Distributors keep the profits.

Romness and her team know there is clearly more to the city than the glossy condos, high-tech companies, and the people who spend hundreds of dollars on tickets to the Austin City Limits festival, or to the South by Southwest events, or even University of Texas football games. Though the homeless population has shrunk over the past few years (it was almost 2,500 just five years ago), there are still enough people out on the streets for The Challenger to have both a staff and an audience.

‘We all collaborate together and we don’t push anyone out who wants to have a voice.’ 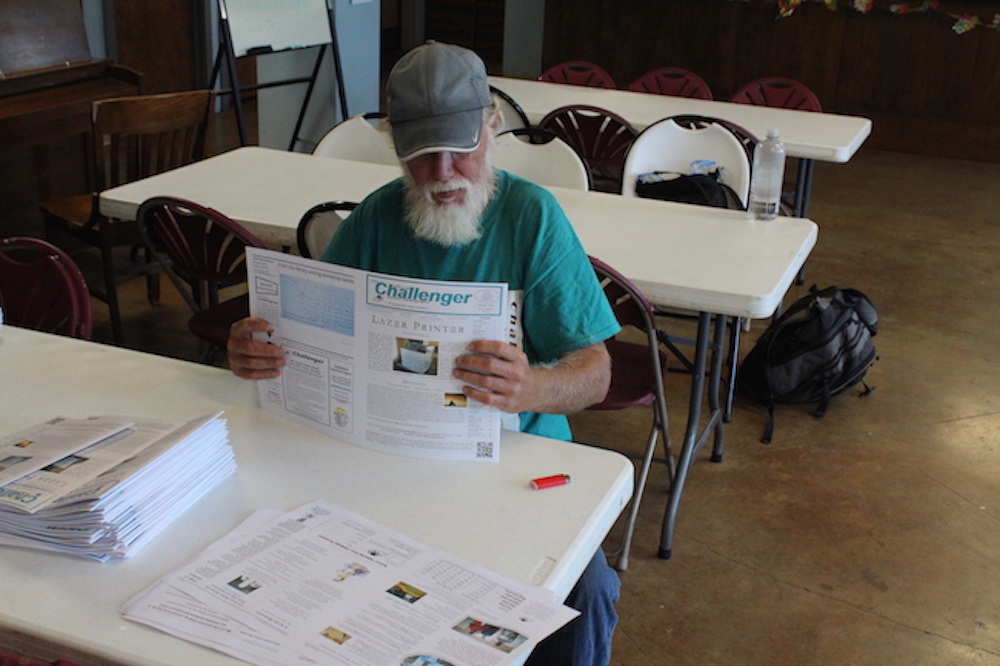 Fred Pettit organizes pages before they are folded by hand. Photo by Aaron Schnautz / The Rag Blog.

Some hardened journalism professionals might raise an eyebrow about the “quality” of the grammar and punctuation in the publication. It’s often easy to spot typos throughout the 20 pages of the monthly paper (August was the commemorative “fiftith” issue) but Romness doesn’t mind. She calls herself the “editor who doesn’t edit.”

To her and her team, what’s most important is the information inside the paper. Like many mainstream papers, you will find comics, crosswords and opinion articles; but unlike those mainstream papers, The Challenger has so much more. Filled in the paper’s pages is inspirational poetry, creative writing, social movement updates, warnings about dangerous street drugs and alerts about where to get clean clothes or a warm meal.

On Wednesdays, the group gathers inside St. David’s Episcopal Church at 7th and Trinity to write and critique each other’s work, while enjoying access to computers, coffee and air conditioning. The church is where the paper gets put together, with each of the nearly 1,000 copies folded by hand. The work seems like a welcome relief from the hard, street realities endured by most members of The Challenger.

Most of the writers ‘are either homeless or recovering from the situation.’

“The writers, most of whom are either homeless or recovering from the situation, are in a unique situation as journalists, where they can’t avoid a very serious reality,” assistant editor Lee Frnk said.

“Breaking from the street, even for an hour, helps these folks.”

The Challenger isn’t the first street newspaper in the city. From 1999-2010, The Austin Homeless Advocate, later becoming The Austin Advocate, provided news for and by the homeless. Romness worked at The Advocate until financial constraints shut it down, but decided it was time to start a new newspaper: “In March 2011… I made a pot of soup and met with the guys [from The Advocate] in the park, and then before we knew it, two, three weeks later we had a paper out,” she said.

The paper had modest beginnings, printing eight pages and being read by less than 500 people. Now Romness has expanded it to 20 pages, and readership has nearly tripled.

Always operating on a shoestring budget, The Challenger has some fresh glimmers of hope. After a recent fundraising effort by Romness and others, the team purchased a new laser printer to print and distribute more copies. They settled on a printer that is able to crank out 20 pages a minute — or one full copy of The Challenger.

‘Maybe some day we’ll have an office.’

Still, they need more sponsors to support the paper. An accountant to balance the books. Maybe laptops and cameras. Paper and ink. Bus passes for reporters to travel the city. But there’s one thing at the very top of the wish list for The Challenger.

“Maybe some day we’ll have an office,” Frnk said.

Until that day, the giant oak tree in front of City Hall will continue to be where staff meetings are held — and where a band of unlikely, hardy journalists will create one of Austin’s most truly peculiar and extraordinary publications.

If you’d like to donate or learn more about The Challenger, please visit the website at www.challengernewspaper.org.

[Aaron Schnautz, an aspiring sports journalist, is a graduate student in journalism at the University of Texas at Austin. He can be found on Twitter @apschnautz23.]

3 Responses to Aaron Schnautz :
METRO | ‘The Challenger’ is a newspaper published by Austin’s homeless