Accurately (If Crudely) Characterising the Commute

From The Group News Blog

Dear President Bush: Thanks for pullin’ my ass outta the fire. Yours, Scooter. By the way, your hands smell like…Oh my God! GASOLINE!!!

Ain’t this a bitch?

I get all busy for a day, hunkered down in a basement in Jersey editing video–shitty FM radio signal, no AM at all, and no free WiFi signal to be had in the hood, (Plainfield) so I was kinda cut off–and totally focused on choppin’ up about an hour of digital zeroes and ones…

And I come home at one a.m., check the blogs and find… THIS?

For about fifteen seconds, I was all “What the fuck? I’ll be damned! Aw, hell-to-the-naw!”

For about fifteen seconds, that is.

And then I remembered that I’d heard more than a few folks I trust, recently talking about the dipshit-no-one-wants-to-admit-they-voted-for-as-president-in-’04- except-for-Joe-Lieberman’s-scrotum-faced-self, having a “Why not do it?” attitude when it came to tossing Scooter’s sentencing salad.

“What the fuck’s gonna happen? His poll numbers are gonna drop some more? Please. He may as well.”

And so, the dipshit-no-one-wants-to-admit-they-voted-for-as-president-in-’04- except-for-Joe-Lieberman’s-scrotum-faced-self, most certainly did just that, on Monday afternoon.

Now, you may ask…why did my desire to box-grater the bastard’s testes over this ass-rape of justice last but a mere fifteen seconds?

Because I saw that pic of Bush from yesterday morning–before he did Scooter that solid. Look at the scuttling little cockroach in the pic from the Times’s link [here]. 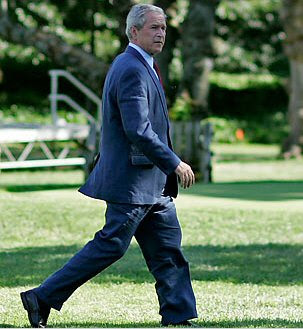 That boy’s as we say around the way, “gettin’ up”.

Perambulating like a sweaty, Goddamned boost artist trying to get out of Macy’s front door with a pants-front full of shoplifted panties, barbecue utensils, and a shit-on legacy.

The dude ain’t doin’ his bullshit, overcompensating Texas “swagger”, here. He is skulking off like a criminal on the lam, looking over one shoulder to see if security’s chasing him to the front doors. And I so wanted to see Scooter in the big house, the pokey, joint, hoosegow and the jug. Oh yeah…The Rock Farm and Barsville, too.

But you know what? All this commutation does is give people one more thang to rain stale fruit, spit, and the dog shit you just scooped in that black plastic bag down on this light-scurrying pest of a president. Think it’s going well for him on this reaction to pressure from his baby-chomping veep?

This part made me laugh–They turned off the White House comment line this afternoon in the wake of Bush’s little reach-around. FUCKING TURNED OFF THE WHITE HOUSE COMMENT LINE. That’s what you call…that’s right, a bunker mentality, kids. What could possess a “non-poll listening”, alleged man of principle to so nakedly run like Gerry Cooney from the Larry Holmes-esque right hands of overwhelming disapproval with the act?

Oh yeah. Lookit that! The answer’s right there in the question.

So, instead of us wondering what color knit hats Scooter was gonna be knitting for Adebisi in stir for awhile, we get to see a squirming, punk-running Bush try to hide from an increasingly angry mob of Americans over yet another self-inflicted fuck-up.

And the likes of Scooter’s backers such as Rudy and Fred? get to defend their statements backing him–good ol’ “Law & Order” Fred? and law and order Rudy should have great fun parsing this one.

“Rudy! Will you do the same thing for your friend Bernie Kerik if you’re elected?”

“Mr. Thompson? Doesn’t this bring back memories of Watergate for you, sir?”

CUT TO: A SHOT OF RUDY AND FRED SHRINKING RAPIDLY WITH SHAME, LIKE FRED AND BARNEY IN THE CLASSIC FLINTSTONES EPISODE “THE DRIVE IN”.

Oh yeah, a few wingnuts’ll crow…wanly though, ’cause Bush is still soft on them damned meskins, and the hook-up ain’t quite enough to slake that thirst for the level of evil needed to feel like the wanton, shit-dumping alpha dogs they once were.

Bush has forever branded himself, and much to the GOP’s old-guard kingmakers chagrin–the whole party, especially post-their hounding of Clinton and jailing of Susan McDougal (who did her fucking time) as punk-assed, special-treatment addicted crooks. Broderella, Tweety, The Crotch Sniffer and their ilk will tut-tut and disagree…but that walk/run, and the hiding in the attic as the phone beep-beep-beeps off its hook speaks volumes.

Nothin’ to lose, so he doubles down, of course.

Nothing to cover it.

Escorted to the back where a dude/the public with a ballpeen hammer awaits to extract payment from freshly-powdered knuckles.

Heckuva job, George. You’re dead-set on making this more fun every week you have left. Impeachment? It would be fun–can’t lie. But it’s such a drawn-out trip to get there. Damned if it isn’t almost as much fun though, seeing you caught naked time and again, eyes popped like Don Knotts on crack, picking up leaves to cover your wee, cold-shrunken gonads, only to realize–ooops! I did it again! “I fucking grabbed Poison Ivy!”

Keep scratchin’, dog…and touch a few more friends with yer hands while yer at it.