Faced with a burgeoning insurgency and the deteriorating authority of the central government of Hamid Karzai, the NATO command has signalled its determination to sacrifice more Afghan civilians and its own soldiers in a desperate bid to wrest control of the country.

Fierce resistance to the occupation, resulting in heavy losses for both insurgent fighters and foreign troops, has forced commentators close to the British military to dispense with the pretence of a “peace-keeping” mission and describe the situation as “all out war.”

Forty British soldiers have now been killed in the war in Afghanistan, of which 35 have died in the past six months. An additional 211 have been injured, many seriously.

An unnamed military observer told the BBC: “We’re fighting a war in southern Afghanistan. This is not an enhanced peace support operation.”

Other military sources have said that British forces have not faced such a severe challenge since the Second World War. Major Charles Heyman, editor of Armed Forces of the UK, said, “It’s worth remembering what Field Marshal Slim said during the Second World War: ‘The more you use, the less you lose.’ And he was talking about soldiers on the ground. So, an option to consider is to reinforce the troops immediately with at least three battalions of around 2,000 fighting soldiers… If they can’t get more troops, the British may have to maintain security in a smaller area than they are currently operating in.”

On September 3, the Sunday Telegraph published details of the changes made to the military’s rules of engagement (ROE).

The newspaper revealed that British commanders had now been given official clearance to use the army’s controversial Hydra rockets, which are developed to kill large concentrations of people with tungsten darts. It commented that “the disclosure marks a major escalation in hostilities in the war-torn country and directly contradicts claims made by the government that the Army was only in Afghanistan to provide the security conditions needed to allow reconstruction and self-governance to take place.”

24 September 2006
EXCLUSIVE: BETRAYED, SOLDIER QUITS
EXCLUSIVE Army officer quits in disgust over Afghan shambles & reveals: Our troops are called The Borrowers because they have to cadge ammo The heat is so intense that guns are melting British food is being stolen by Taliban looters
By Nick Owens

… The officer – a member of 16 Air Assault Brigade – has now turned whistle-blower to give a shocking account of how shortages have hit troops on the frontline.

He reveals how British soldiers were reduced to borrowing ammunition from Canadian forces also serving in the lawless Helmand province.

He says guns are melting in intense 50C heat, leaving soldiers unable to use them to defend themselves. Lives are being put at risk, he claims, because vital communication kits are being rationed. He also tells how Taliban fighters steal soldiers’ food supplies because there aren’t enough British troops to guard them.

The officer says he decided to speak out after they were told by Tony Blair in June: “This mission is a reconstruction mission – supported by the military.” The officer said: “I couldn’t believe what I was hearing. It is not a reconstruction exercise in Afghanistan. Every day lives are put at risk on the frontline. But we haven’t got the proper equipment.

“Hearing that message was a kick in the guts for me and the rest of the boys. The truth is not being told and there is anger on the frontline about the lack of supplies.” … 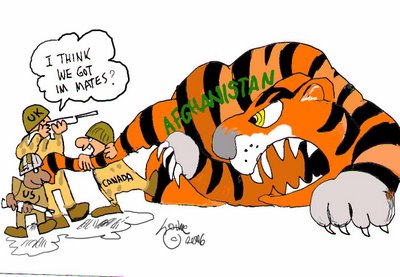