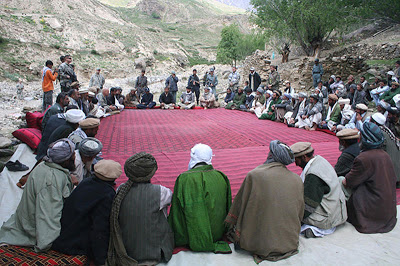 It would be hard to deny the evidence that Afghanistan is at a crossroads as Democratic nominee Barack Obama yesterday met the country’s President Hamid Karzai. Despite the claims by some British officers that the Taliban is being tactically routed, no one seems to have told the Islamist insurgents. Opium production in the areas under their control – and that of other warlords – has reached new records this year. Corruption and criminality, linked often to the very heart of government, is endemic. Despite $15bn in aid that has been disbursed, Afghanistan remains mired in pervasive poverty with unemployment standing at more than 40 per cent. The country’s position as one of the world’s poorest has barely shifted since 2001.

Confronted with these multiple failures, the temptation, voiced yesterday by Obama, and by his Republican opponent John McCain already, is to throw more military forces at the problem in a replication of the Iraq ‘surge’. A parallel attraction, encouraged by Karzai, is to insist that the international community provide ever more money in the hope that some of the billions will stick. But in a country beset by rapidly increasing pessimism over the ability of the international community finally to bring to an end Afghanistan’s 30-year cycle of poverty and violence, what is needed is a large-scale rethinking of what we are doing in Afghanistan, not more violence and more largesse.

The reality, despite the claims of Nato and Western diplomats, is that the war is far from being won. For many, it is becoming clear that it cannot be won, framed in military terms. Nor can it be won in terms of the present political settlement, largely imposed on Afghanistan, which has accepted a re-emergence of war-lordism, cronyism and the general collapse of legitimacy and the rule of law in exchange for the impression of a ‘stable’ central government, albeit one which holds little sway outside of Kabul. The tensions thus created have encouraged a return to a state of widening conflict.

There have been some positive steps since the fall of the Taliban regime. Millions of children are in education in a country with a long history of high levels of illiteracy, particularly among women. A vibrant media, although under threat from many sides, also exist. Improvements have been made in the provision of healthcare. But this is not enough to persuade Afghans that much is getting better when they are confronted daily by criminality, violence, a predatory police force and an ill-educated and corrupted civil service.

In Afghanistan, the real risk is that more is less. The danger of sending ever more troops is that the civilian casualties that will follow in the intensifying conflict will push more Afghans towards the Taliban in a country with a history of fiercely asserting its independence. The hazard of throwing more money at the problem is that without a tighter focus to that spending, Afghans see the increased aid budget as an opportunity for a small elite of Afghans and a small army of international contractors and aid workers to enrich themselves still further. A further consequence is that, because it lacks a professional civil service to support the people, the aid community has shouldered the burden, inadvertently undermining still further the development of effective local services.

The lessons of Afghanistan, as Rory Stewart, a former British diplomat and Afghan expert now running an aid organisation in Kabul insisted last week, points to a more tightly targeted approach, concentrating aid efforts on areas of the country where visible improvements are viable, as a promise of what is possible elsewhere. Some of the most successful schemes have been small-scale: micro-finance projects from Herat to Kabul and Mazar-i-Sharif have provided the tools, via education and small loans, to get people working, the greatest priority being on rural rehabilitation.

More widely, there needs to be acceptance that this is not a local conflict but a regional one. Pakistan’s failure to tackle the Taliban’s safe havens in the tribally administered areas is stoking Afghanistan’s woes. Finally, there needs to be an end to the cosy client relationship with Karzai, who has yet to show himself a capable leader, and a retreat from the West’s view that he is the country’s only possible saviour.

This entry was posted in RagBlog and tagged Afghanistan. Bookmark the permalink.