Afghanistan: Kabul Is Under a Siege of Sorts 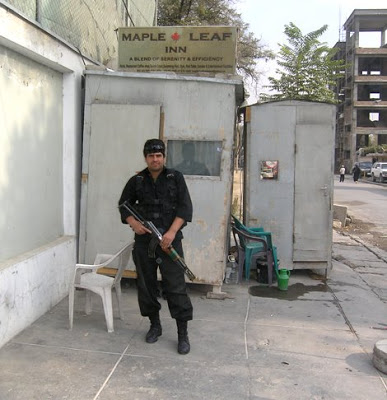 When I was last on assignment in Afghanistan, in May 2007, my few days in Kabul seemed in retrospect like a bit of an escape. They used to call the capital city a bubble: not immune from the terror that beset the country’s south, but relatively safe and fairly welcoming to foreigners. In Kandahar city, reporters have always had to be cautious, never lingering anywhere in public for long, being as inconspicuous as possible in traditional clothing. In Kabul last year, I walked the streets on my own without fear and did my job, with a translator, relatively freely. I recall buying Afghan naan bread and delicous pastries from street-front vendors, and found almost everyone curious and friendly. We would eat in restaurants catering chiefly to locals and not think twice about it. Well, 18 months later, the bubble has burst.

I arrived in Kabul from Kandahar last Saturday with some eagerness, realizing security throughout the country was deteriorating but expecting to enjoy a freer-wheeling time during my three-day visit. My translator – or fixer as we say – delivered the bad news before we even left the airport. I could no longer leave my well-barricaded guest house without escort, I should probably wear a shalwar kameez – the typical Afghan male dress – when we ventured into public places, and must keep the car doors locked at all times, he said. A spate of kidnappings and assassinations, more brazen bombings and an insurgency creeping ever closer to the city gates had made Kabul a very different place.

Much as I would like to publicly recognize my brave and resourceful fixer, I cannot name him. He is afraid that if his connection to Western media becomes known to the Taliban, his days would be numbered. Before we drove into a neighbourhood that was a little less safe than the city centre, he removed all the contact numbers from his cell phone for foreigners and government officials. The Taliban are known to check phones for such links, which amount to an offence that, in their world, is punishable by death. The city itself seemed more dominated than ever by concrete walls and barriers. Kalishnikov-toting security was everywhere.

All this was before Monday morning. As we drove to an interview, my fixer pointed to the radio, which was broadcasting the news in Dari. Just an hour or so earlier, a foreign aid worker had been shot dead in the street, walking to work. She was later identified as Gayle Williams, a 33-year-old Brit. The Taliban said she had been killed because she worked for a Christian-based organization and was prosletyzing. Her job, though, involved helping disabled Afghans.

Hope is not lost in Kabul, or Afghanistan. In fact, people remain remarkably hopeful. But they appear deeply depressed about the current reality, and for good reason it would seem. The capital city, with its billions in foreign money and its legions of foreign troops, is under a siege of sorts. Already, I was told, many business people – and their desperately needed investment dollars – have left for safer havens. What is needed now is for countries like Canada to publicly, bluntly acknowledge the direness of the situation, and focus like never before on somehow fixing it. Yet as the embassy and UN and NGO staff – all dedicated people, I know – speed by the roadblocks in their armoured, bullet-proofed Toyota Land Cruisers, one wonders if the reality has sunk in.