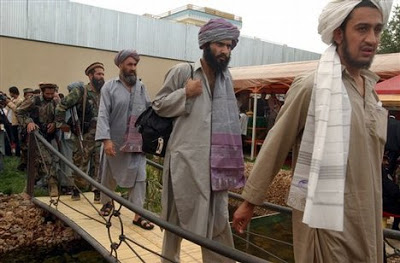 Detainees being held at Bagram Air Base in Afghanistan cannot use US courts to challenge their detention, the US says. Photo by Musadeq Sadeq / AP.
‘Worse than Gitmo’:
ACLU Asks for Documents on Bagram Prison, Where the US Still Holds 600 Prisoners

The Obama administration argues that the prisoners at Bagram—some who have been there 6 years—do not have habeas corpus rights. That’s not looking backwards. It is current policy.

As the Obama administration faces mounting pressure to appoint an independent special prosecutor to investigate torture and other crimes ordered by senior Bush administration officials and implemented by CIA operatives and contractors, the ACLU is opening up another front in the battle for transparency. But this one is not exclusively aimed at the Bush era. Today, the ACLU filed a Freedom of Information Act request seeking to make public records on the US-run prison at Bagram Airfield in Afghanistan. The group is seeking documents from the Departments of Defense, Justice and State and the CIA.

As the ACLU states, “the U.S. government is detaining more than 600 individuals at Bagram, including not only Afghan citizens captured in Afghanistan but also an unknown number of foreign nationals captured thousands of miles from Afghanistan and brought to Bagram. Some of these prisoners have been detained for as long as six years without access to counsel, and only recently have been permitted any contact with their families. At least two Bagram prisoners have died while in U.S. custody, and Army investigators concluded that the deaths were homicides.”

The Obama administration has refused to grant habeas corpus rights to prisoners at Bagram, but a federal judge recently ruled that three prisoners can challenge their detention in U.S. courts. The Obama administration, in continuing a Bush-era policy, is appealing the ruling. According to the ACLU, “The prisoners, who were captured outside of Afghanistan and are not Afghan citizens, have been held there for more than six years without charge or access to counsel:”

“The U.S. government’s detention of hundreds of prisoners at Bagram has been shrouded in complete secrecy. Bagram houses far more prisoners than Guantánamo, in reportedly worse conditions and with an even less meaningful process for challenging their detention, yet very little information about the Bagram facility or the prisoners held there has been made public,” said Melissa Goodman, staff attorney with the ACLU National Security Project. “Without transparency, we can’t be sure that we’re doing the right thing – or even holding the right people – at Bagram.”

This is a very important case to monitor, particularly because it is an area where Obama’s administration has allied itself squarely with that of the Bush administration. This is not “looking backwards” at all, it is looking at the present and it aint Dick Cheney and Donald Rumsfeld running this sick, unconstitutional show.