AfPak War : Not a Pretty Picture 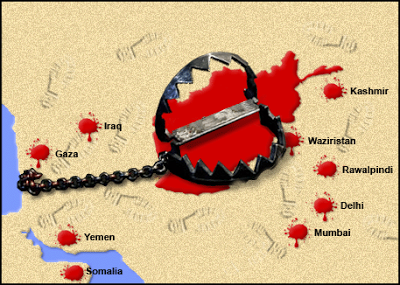 The news regarding the war in Afghanistan just keeps getting worse. The NATO alliance war in Afghanistan is increasingly morphing into “AfPak” war that is also destabilizing Pakistan. Meanwhile the Taliban is steadily increasing in strength whereas the US/NATO forces are regarded by the population as corrupt and ineffective.

In one recent case, the Italian NATO troops bribed the Taliban to maintain the peace. When the French troops who were sent in to replace them were not in on the deal, they were attacked and mutilated.

Here is an exclusive report by a journalist who interviewed a top Taliban commander who outlines their strategy; an interview rather unlikely to be granted if the Taliban were not confident of victory.

Most observers, including even top generals like McChrystal, who are actively trying to promote an escalation of the war, agree that we are currently losing strength to the Taliban guerrillas.

Independent military observers think that any US escalation will strengthen the insurgents, and that we are unlikely to be able to prop up the unpopular Afghan army. And that if we could do so, it would take a long time.

A veteran Army officer who has served in both the Afghanistan and Iraq wars warns in an analysis now circulating in Washington that the counterinsurgency strategy urged by Gen. Stanley A. McChrystal is likely to strengthen the Afghan insurgency, and calls for withdrawal of the bulk of U.S. combat forces from the country over 18 months.

In a 63-page paper representing his personal views, but reflecting conversations with other officers who have served in Afghanistan, Lt. Col. Daniel L. Davis argues that it is already too late for U.S. forces to defeat the insurgency…

In the paper, Davis argues that the counterinsurgency strategy recommended by McChrystal would actually require a far larger U.S. force than is now being proposed. Citing figures given by Marine Corps Col. Julian Dale Alford at a conference last month, Davis writes that training 400,000 Afghan army and police alone would take 18 brigades of U.S. troops – as many as 100,000 U.S. troops when the necessary support troops are added.

The objective of expanding the Afghan security forces to 400,000, as declared in McChrystal’s “initial assessment”, poses other major problems as well, according to Davis.

He observes that the costs of such an expansion have been estimated at three to four times more than Afghanistan’s entire Gross Domestic Product. Davis asks what would happen if the economies of the states which have pledged to support those Afghan personnel come under severe pressures and do not continue the support indefinitely.

“It would be irresponsible to increase the size of the military to that level,” he writes, “convincing hundreds of thousands of additional Afghan men to join, giving them field training and weapons, and then at some point suddenly cease funding, throwing tens of thousands out of work.” — Gareth Porter / IPS

Not only is the war in Afghanistan costly and nearly certain to be protracted into a war lasting years, but it is a logistical nightmare, with no clear goals. The few operable roads leading into the capital of Kabul are now frequently mined with IEDs. The Pentagon is reporting to Congress that the fuel to fight the war is costing the US $400 per gallon to deliver. Given the logistics, often the only way to supply US/NATO troops is by helicopter.

The Pentagon pays an average of $400 to put a gallon of fuel into a
combat vehicle or aircraft in Afghanistan….

The Pentagon comptroller’s office provided the fuel statistic to the committee staff when it was asked for a breakdown of why every 1,000 troops deployed to Afghanistan costs $1 billion….

According to a Government Accountability Office report published earlier this year, 44 trucks and 220,000 gallons of fuel were lost due to attacks or other events while delivering fuel to Bagram Air Field in Afghanistan in June 2008 alone….

The Marines in Afghanistan, for example, reportedly run through some 800,000 gallons of fuel a day.

This entry was posted in Rag Bloggers and tagged Afghanistan, Department of Defense, Pakistan, U.S. Foreign Policy. Bookmark the permalink.

1 Response to AfPak War : Not a Pretty Picture