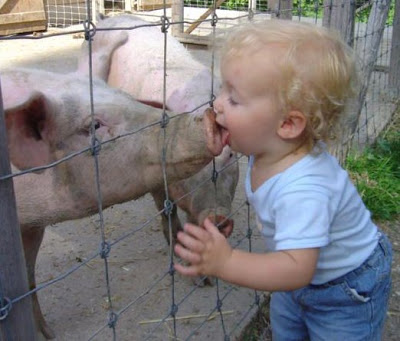 This photo, on the Smithfield Farms website, (still there at this posting on May 3, 2009), carries the following caption: “Life is short. Break the rules. Forgive quickly. Kiss slowly. Love truly. Laugh uncontrollably and never regret anything that made you smile.” Smithfield Farms is a subsidiary of Smithfield Foods.

Smithfield Farms fled U.S. environmental laws to open a gigantic pig farm in Mexico, and all we got was this lousy Swine Flu.

See ‘The Name of the Beast,’ by James Retherford, below.

US and Mexico authorities claim that neither knew about the “swine flu” outbreak until April 24. But after hundreds of residents of a town in Veracruz, Mexico, came down with its symptoms, the story had already hit the Mexican national press by April 5. The daily La Jornada reported:

Clouds of flies emanate from the rusty lagoons where the Carroll Ranches business tosses the fecal wastes of its pig farms, and the open-air contamination is already generating an epidemic of respiratory infections in the town of La Gloria, in the Perote Valley, according to Town Administrator Bertha Crisóstomo López.

The town has 3,000 inhabitants, hundreds of whom reported severe flu symptoms in March.

CNN’s Dr. Sanjay Gupta, reporting from Mexico, has identified a La Gloria child who contracted the first case of identified “swine flu” in February as “patient zero,” five-year-old Edgar Hernández, now a survivor of the disease.

By April 15 – nine days before Mexican federal authorities of the regime of President Felipe Calderon acknowledged any problem at all – the local daily newspaper, Marcha, reported that a company called Carroll Ranches was “the cause of the epidemic.”

La Jornada columnist Julio Hernández López connects the corporate dots to explain how the Virginia-based Smithfield Farms came to Mexico: In 1985, Smithfield Farms received what was, at the time, the most expensive fine in history – $12.6 million – for violating the US Clean Water Act at its pig facilities near the Pagan River in Smithfield, Virginia, a tributary that flows into the Chesapeake Bay. The company, according to the Environmental Protection Agency (EPA), dumped hog waste into the river.

It was a case in which US environmental law succeeded in forcing a polluter, Smithfield Farms, to construct a sewage treatment plant at that facility after decades of using the river as a mega-toilet. But “free trade” opened a path for Smithfield Farms to simply move its harmful practices next door into Mexico so that it could evade the tougher US regulators.

Unlike what law enforcers forced upon Smithfield Farms in the US, the new Mexican facility – processing 800,000 pigs into bacon and other products per year – does not have a sewage treatment plant.

According to Rolling Stone magazine, Smithfield slaughters an estimated 27 million hogs a year to produce more than six billion pounds of packaged pork products. (The Veracruz facility thus constitutes about three percent of its total production.) 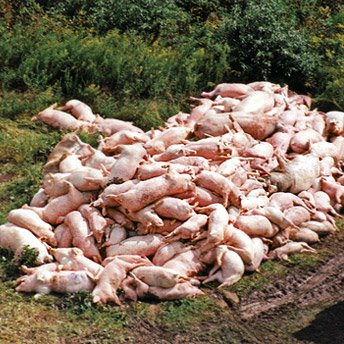 Photo from doveimaging.com / Rolling Stone.
Reporter Jeff Teitz reported in 2006 on the conditions in Smithfield’s US facilities (remember: what you are about to read describes conditions that are more sanitary and regulated than those in Mexico):

Smithfield’s pigs live by the hundreds or thousands in warehouse-like barns, in rows of wall-to-wall pens. Sows are artificially inseminated and fed and delivered of their piglets in cages so small they cannot turn around. Forty fully grown 250-pound male hogs often occupy a pen the size of a tiny apartment. They trample each other to death. There is no sunlight, straw, fresh air or earth. The floors are slatted to allow excrement to fall into a catchment pit under the pens, but many things besides excrement can wind up in the pits: afterbirths, piglets accidentally crushed by their mothers, old batteries, broken bottles of insecticide, antibiotic syringes, stillborn pigs—anything small enough to fit through the foot-wide pipes that drain the pits. The pipes remain closed until enough sewage accumulates in the pits to create good expulsion pressure; then the pipes are opened and everything bursts out into a large holding pond.

The temperature inside hog houses is often hotter than ninety degrees. The air, saturated almost to the point of precipitation with gases from shit and chemicals, can be lethal to the pigs. Enormous exhaust fans run twenty-four hours a day. The ventilation systems function like the ventilators of terminal patients: If they break down for any length of time, pigs start dying.

Consider what happens when such forms of massive pork production move to unregulated territory where Mexican authorities allow wealthy interests to do business without adequate oversight, abusing workers and the environment both. And there it is: The violence wrought by NAFTA in clear and understandable human terms.

The so-called “swine flu” exploded because an environmental disaster simply moved (and with it, took jobs from US workers) to Mexico where environmental and worker safety laws, if they exist, are not enforced against powerful multinational corporations.

False mental constructs of borders –- the kind that cause US and Mexican citizens alike to imagine a flu strain like this one invading their nations from other lands –- are taking a long overdue hit by the current “swine flu” media frenzy. In this case, US-Mexico trade policy created a time bomb in Veracruz that has already murdered more than 150 Mexican citizens, and at least one child in the US, by creating a gigantic Petri dish in the form pig farms to generate bacon and ham for international sale.

None of that indicates that this flu strain was born in Mexico, but, rather, that the North American Free Trade Agreement created the optimal conditions for the flu to gestate and become, at minimum, epidemic in La Gloria and, now, Mexico City, and threatens to become international pandemic.

Welcome to the aftermath of “free trade.” Authorities now want you to grab a hospital facemask and avoid human contact until the outbreak hopefully blows over. And if you start to feel dizzy, or a flush with fever, or other symptoms begin to molest you or your children, remember this: The real name of this infirmity is “The NAFTA Flu,” the first of what may well emerge as many new illnesses to emerge internationally as the direct result of “free trade” agreements that allow companies like Smithfield Farms to escape health, safety and environmental laws.

The Name of the Beast: Smithfield Foods

Smithfield Foods, inc. — not Smithfield Farms — is the name of the multinational food corporation ($11.4 billion in 2008 sales) whose Mexican subsidiary near Veracruz, Granjas Carroll de México, is linked by writer Al Giordano to ground zero of the swine flu outbreak. Smithfield Farms is a small subsidiary selling mail-order pork products.

In addition to the Carroll operation in the Perote Valley, Smithfield Foods owns international hog factory farms near Sonora, Mexico, and in Poland, Romania, China, and the U.K. and slaughterhouses in Virginia, North Carolina, Maryland, Florida, and Kentucky. The corporation also owns a number of well-known private brands such as restaurant supplier Curly’s Foods and retail names Armour, Eckrich, Farmland, and more. Its wholly owned subsidiary Murphy-Brown — with 300 company-owned farms and 1,500 contract farms across 12 states — boasts of being the world’s largest hog producer and one of the nation’s leading turkey producers. Last year the corporation became the U.S.’s fifth largest beef processor. Through its specialty foods group, Smithfield markets peanuts, the source of the nation’s last big health scare.

In October 2007 Smithfield Foods filed a federal civil suit against the United Food and Commercial Workers Union for alleged “racketeering” in the union’s effort to organize the workers at Smithfield’s Tar Heel, N.C., pork processing plant. The company dropped the suit a year later and agreed to hold a fair election. Two previous union elections, in 1993 and 1997, resulted in narrow union defeats later overturned by the federal appeals court’s determination that the company improperly influenced the outcome, and Smithfield was required to pay $1.1 million plus interest to workers who had been fired as part of the company’s union-busting effort.

In December 2006, Smithfield Foods was the subject of an explosive investigative report by Jeff Tietz, published in Rolling Stone magazine.

3 Responses to Al Giordano : How the ‘NAFTA Flu’ Exploded