Ron Jacobs : Vietnam Was Not a ‘Mistake’ 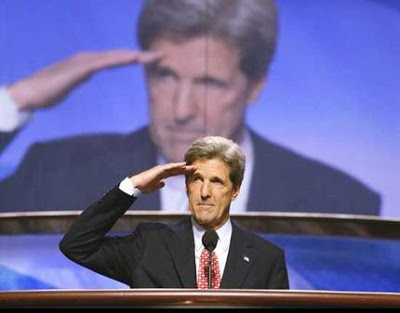 John Kerry, who parted ways with the VVAW, has served well in the halls of empire. Here he salutes the delegates at the Democratic Convention in Boston, 2004. Photo by Stephen Savoia / AP.
It was not a mistake:
Vietnam and U.S. policy

On January 15, 1973, Richard Nixon announced a halt to offensive operations by U.S. forces in Vietnam. Twelve days later a peace agreement was signed in Paris between the United States, North Vietnam, the U.S. client regime in Saigon, and the Provisional Revolutionary Government of South Vietnam. This agreement called for an immediate ceasefire and called for the Vietnamese to negotiate a political settlement regarding the fate of southern Vietnam.

The January 27th agreement was the same as one that Saigon had refused to sign three months earlier. The interlude between the two dates saw some of the heaviest bombing of the entire conflict by the United States Air Force (USAF). I vividly recall listening to the news broadcasts on Armed Forces Radio and watching the German telecasts reporting the bombing.

In typical fashion, Nixon named the operation after a position in U.S. football: Operation Linebacker II. It is estimated that this particular round of carpet bombing killed more than 1,600 northern Vietnamese civilians, including over 200 at Hanoi’s Bach Mai hospital alone. I personally attended two protests in Frankfurt am Main against the so-called Christmas bombings. Similar protests occurred around the world.

The peace agreement did not stop the war. It did provide Nixon and Kissinger with a way to complete their policy of Vietnamization. U.S. troops began to be withdrawn at a greater pace and South Vietnamese troops (ARVN) began to replace the withdrawing forces. U.S. forces on the ground were officially only serving as advisors. Anecdotal evidence suggests that USAF planes continued to bomb, although the missions were now officially led by South Vietnamese flyers.

As many a GI, sailor, or Marine who was stationed in (or off the coast of) Vietnam after the peace agreement was signed can tell you, the war did not end. However, the will to fight among South Vietnamese forces was rapidly fading. Since 1971, friends of mine returning from battle had been telling stories of outright refusal of orders by entire units of ARVN and U.S. forces. Others told me that their bosses told them to “just stay out of sight and stay alive.”

The official word was that no U.S. combat soldiers remained in Vietnam after March 1973. Reflecting the mood among U.S. voters, Congress cut off all official military aid to the Saigon government in 1974.

I returned to the United States in August 1973 and began college in the Bronx. Although there were some meetings and even a small protest or two regarding the continued funding of the war against the Vietnamese (and the unofficial presence of thousands of troops), most of the political activity was focused on the CIA/ITT assisted coup in Chile and the growing calls for Nixon’s impeachment.

One memorable protest against the U.S. funding of the failing Saigon endeavor to survive the will of the Vietnamese people was a takeover of the Statue of Liberty by a small band of Vietnam Veterans Against the War (VVAW) and members of the Attica Brigades. Both of these groups were left anti-imperialist in nature and allies of the post-SDS formation known as the Revolutionary Unions.

John Kerry and the VVAW had parted ways many months before; Kerry had always represented the less-radical (some would say right-wing) elements of the VVAW and the antiwar movement in general. His departure from the VVAW was not a surprise, especially considering the growing radicalization of the organization’s membership.

True to form, John Kerry’s understanding of history has served him well in the halls of empire. Indeed, he may very well become the next Secretary of State; successor to another of the anti-Vietnam war movement’s imperial apologists, Hilary Clinton.

Neither Kerry nor Clinton ever considered the argument that the U.S. war in Vietnam was part and parcel of a policy with economic and political domination of the world as its goal. Instead, they preferred to believe that the slaughter of millions of Vietnamese, the creation of hundreds of thousands of refugees, and the destruction of a land, was just a mistake. The overall policy was a good one, merely desiring to bring democracy and freedom to those same people being murdered and maimed.

Since that day in 1973, the United States has been involved in some kind of military conflict almost without a let up. Democrat and Republican, right wing and liberal, the battle for world hegemony continues unabated.

Low-intensity conflicts that included the massacre of Salvadoran farmers by U.S.-funded death squads and militaries; the murderous subversion of a popular government by CIA-contra forces in Nicaragua; the arming of religious extremists in Afghanistan to fight a secular and progressive government in Kabul; the imposition of sanctions against the Iraqi people causing the deaths of over a half-million people (leading Democratic Secretary of State Albright to state the deaths were “worth the price”); and the never-ending support for Israel’s brutal and Orwellian occupation of Palestine.

All of these elements and hundreds more are what describe US.. foreign policy. They are not mistakes any more than the U.S. war on the Vietnamese people was a mistake. Indeed, they are the price the world must pay.

In the weeks to come, there will be a parade of powerful men and women from the nation’s elites appearing before committees of the Senate. These individuals will be auditioning for their roles in the new White House administration. Some, like John Kerry, will face some loud opposition from the ultra-right members of that legislative body.

Don’t be fooled by the bombast. The proof that the individual being questioned and the individuals doing the questioning agree is in the history briefly noted above. As long as those in both seats believe in the ideology of empire, Washington’s march will never fall and only rarely stumble.

1 Response to Ron Jacobs : Vietnam Was Not a ‘Mistake’