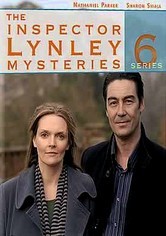 Nathaniel Parker and Sharon Small are excellent as the mismatched-but-successful crime-fighting pair.

The Inspector Lynley Mysteries feature tall, handsome, suave Nathaniel Parker as Scotland Yard Detective Inspector Tommy Lindley, who is also the eighth Earl of Asherton, assisted by brusque working-class Sergeant Barbara Havers (Sharon Small). This odd couple solved a lot of crimes in 23 episodes broadcast from 2002 to 2008. Several are based on some of the popular 18 English mystery novels from American author Elizabeth George. You can watch one here.

In 2007, Small was nominated for the “Best Actress” Satellite Award. More than 89.5% of viewers polled at imdb.com gave the series thumbs-up. The San Francisco Chronicle called Lynley and Havers an “incomparable Scotland Yard team.”

Lynley is the rare detective who exposes the secrets of the upper classes. The series deals with baffling crimes and his marriage, separation, and the murder of his wife.

Elizabeth George explains why there is no romance between Lynley and Havers:

The dynamic between them is not one of sexual attraction. Lynley is from a posh background with a posh voice, educated at Oxford, with a title and money. Havers is from a poor background, and she’s had to fight for everything she’s got. Needless to say, they have huge preconceptions about each other. What I’m interested in is how they start to discover their common ground through police work.

In the novels, Lynley is blond and Havers is plain, dumpy and too-casually dressed. Not so in the TV series.

The series aired in the U.S. on PBS’s “Masterpiece Mystery” series. In France it aired as Meurtres à l’anglaise and in Hungary as Linley felügyelő nyomoz. Netflix and DVD have 22 Inspector Lynley episodes, Netflix Instant streaming has one, and all are on YouTube.