Alan Waldman : ‘Intelligence’ Is a TV Treasure You May Have Missed 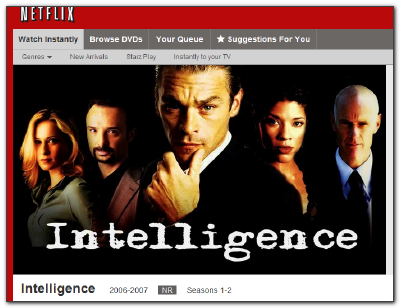 The late and lamented Canadian television series, Intelligence. Screen grab from NetFlix.
Waldman’s film and TV
treasures you may have missed:

[In this weekly column I want to talk about some of the best films and TV series I have enjoyed (and that you might have missed). Most of them are available on DVD and/or Netflix. I will include superior TV dramas, mysteries, and comedies from Canada, England, Scotland, and Ireland.]

Intelligence is a wonderful multiple-award-winning Canadian organized- and corporate-crime series, which was suspiciously cancelled after two brilliant seasons (2006-2007) on The Canadian Broadcasting Corporation.

It has also aired in 55 other countries (including Sweden, Malaysia, Yemen, and Belarus) on the Hallmark Channel and in the U.S. in syndication. The pilot screened on CBC on November 28, 2005, and the 24th brilliant episode aired there on December 10, 2007.

The cast includes Matt Frewer (Max Headroom) as a scheming OCU assistant and the astonishing Pascale Hutton (who won a Canadian Gemini award for this role) as a Russian prostitute who spies on the head of a sleazy U.S. corporation which turns out to be a CIA front.

The cancellation of this compelling, astute dramatic series is widely rumored to be due to pressure on the CBC from the CIA — which found plot elements to be uncomfortably close to the truth.

There were also acting noms for Scott and John Cassini and writing, directing, and producer noms for series creator and show runner Chris Haddock. Haddock created the fine-if-short-lived American series The Handler and two other outstanding Vancouver series I will be featuring in future columns: Da Vinci’s Inquest and Da Vinci’s City Hall.

Intelligence was so good that it absolutely blew my mind both times I watched it — first on TV and later on eight Netflix discs. It is highly intelligent; it is wonderfully and slyly plotted; the cast is great and the production values are very high. The extra features on the DVDs greatly enhance the experience.

I love smart, creative TV and film, and this is one of my very favorites. I believe that if you are bright enough to be reading The Rag Blog, you will greatly enjoy Chris Haddock’s Intelligence.