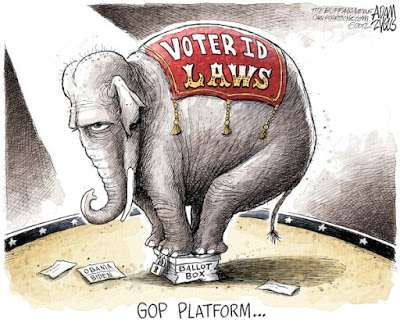 Political cartoon by Adam Zyglis / The Buffalo News / The Cagle Post.
‘Lazy’ people, voting rights, and
Republicans caught with their pants down

Sometimes Republicans just can’t help themselves. Put a little heat on them, and they blurt out the truth, showing what they’re really thinking.

The latest case in point: The retrograde Pennsylvania “Voter ID” law was rejected on October 2, at least in part, by a state judge, Robert Simpson, allowing people to vote normally at least on this November 6. The decision was a victory for labor, the NAACP, retiree groups, and all who care about defending civil rights and liberties.

The main author of the bill, State Rep Daryl Metcalfe (R-Butler), however, chimed in with this comment:

Justice Simpson’s final decision is out of bounds with the rule of law, constitutional checks and balances for the individual branches of state government, and most importantly, the will of the people. Rather than making a ruling based on the constitution and the law, this judicial activist decision is skewed in favor of the lazy who refuse to exercise the necessary work ethic to meet the commonsense requirements to obtain an acceptable photo ID.

Yes, you heard that right. This guy thinks those objecting to this bill are “the lazy who refuse to exercise the necessary work ethic.” And all of us here in Western Pennsylvania not fresh out of the pumpkin patch know exactly who he thinks he’s talking about.

When Gov. Romney went over the top in a recent closed session with his upper crust friends talking about a 47% of the population who wouldn’t “take responsibility” for their lives, I thought things had pretty much hit bottom in the racist dog whistle department. Little did I know!

Metcalfe has done us all a favor in self-exposing the racist mindset behind this GOP voter suppression effort, and revealing exactly why they thought that, if implemented, it could tip the state to Romney. Now they’ve been monkey-wrenched, at least for the time being.

But here’s an interesting thought. I’m not a constitutional lawyer, even though I’ve studied it some. But, where in the Constitution, or in our state voting laws, does it suggest that lazy people or people with a hampered work ethic don’t have the same right to vote as energetic workaholics?

The wealthy had best be careful here. As the saying goes, most people work for their money, but a few people are able to let their money work for them. They can laze about, enjoying the good life of the idle rich. There’s a slippery slope here they may want to avoid for the future.

[Carl Davidson, a longtime activist and author, is a member of Steelworker Associates. He lives in Western Pennsylvania and writes for BeaverCountyBlue.org, the website of the 12th CD Progressive Democrats of America, and blogs at Keep on Keepin’ On. Read more articles by Carl Davidson on The Rag Blog.]