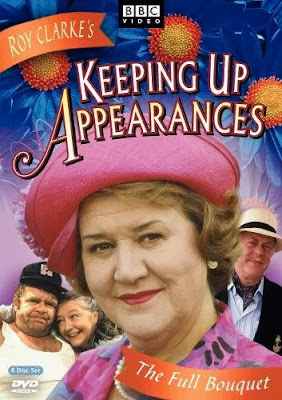 Patricia Routledge stars as a middle class woman who puts on aristocratic airs in this very popular Britcom.

Since last October 10, I have raved about and reviewed my 22 favorite British sitcoms here on The Rag Blog (along with favorite Brit mystery series and some beloved films and Canadian, Irish, Scottish, and New Zealand series). If you missed any of these great comedies, you can get my two cents worth on it by entering its title in the search box on the top left corner of The Rag Blog, or just go here and scroll back through my reviews.

My 22 faves (not exactly in preference order) are: Waiting for God, The Thin Blue Line, Chef!, Fawlty Towers, Blackadder, Father Ted, The Kumars at No. 42, Not Going Out, Rising Damp, Yes Minister/Yes Prime Minister, Absolutely Fabulous, Reggie Perrin, Gavin & Stacey, The Vicar of Dibley, Rumpole of the Bailey, The Fall and Rise of Reginald Perrin, My Hero, Doc Martin, As Time Goes By, League of Gentlemen, and Are You Being Served?. I recommend all of them as delicious comic treats.

I tend to alternate comedy series and mysteries on these pages. Having written up all my very favorite comedies, (not counting the sublime sketch comedy series Monty Python’s Flying Circus and sitcom The Royle Family, because it’s not on Netflix and the Northern English accents are difficult to decipher), I will begin reviewing second-tier comedies, which I like, but not as much as the top group. There is a better-than-average chance that I have forgotten something.

One of my favorite comic characters is Daisy’s slob husband Onslow (Geoffrey Hughes). Other funny characters are Hyacinth’s nervous neighbor Elizabeth, her Hyacinth-fearing brother Emmett, the sisters’ dotty father, and Hyacinth’s wealthy sister Violet, “the one with the Mercedes, swimming pool, sauna and room for a pony,” plus assorted other victims.

Creator and writer of all 44 episodes Roy Clarke was awarded an OBE, won the British Comedy Awards’ 2010 Lifetime Achievement Award and BAFTA’s Dennis Potter Award, also created and wrote 295 episodes of Britain’s longest running sitcom (1973 to 2010), Last of the Summer Wine, and wrote for 38 other series.

Five series of Keeping Up Appearances aired from 1990 through 1995. It was and is a worldwide hit, and many PBS stations air it repeatedly. The series ranked twelfth in the 2004 Britain’s Best Sitcom poll.

Hyacinth is a social-climbing snob, originally from a very poor background, whose main mission in life is to impress others with her lifestyle and perceived affluence and refinement. She likes to spend her days visiting stately homes (convinced she will strike up a friendship with the owners) and hosting “executive-style” candlelight suppers (with her “Royal Worcester double-glazed Avignon china with the hand-painted periwinkles).

She brags about her possessions to others, including her “white slim-line telephone with automatic redial,” which she always answers with “The Bouquet residence, the lady of the house speaking.” Often she receives calls asking for Chinese take-away, causing her great consternation.

Hyacinth’s excessive snobbery makes life difficult for those around her, especially her long-suffering, hen-pecked husband, who lives in fear of saying the wrong thing (and how he can afford his wife’s expensive tastes). Nervous neighbor Elizabeth fears breaking Hyacinth’s prized coffee cups, etc. and often does.

Her brother Emmett has put on musicals and lives in terror of Hyacinth singing to him. This is deft, since Routlege is a professional singer (a wonderful Pirates of Penzance, etc.) who always sings off-key to him. My wife loves Hyacinth seeking to impress the postman and other working folk at the house, and the fact that her rich, envied sister Violet’s husband is actually a cross dresser.

Hyacinth [to postman]: I want you to instruct your superiors that this is a first class stamp residence.

Rose: Onslow, father’s on the roof again!
Onslow: Ask him if he’s got my bottle opener!

Hyacinth [in the car]: Mind the horse.
Richard Bucket: It’s in the field.

Hyacinth [to Richard, as she gets a phone call from their unseen son]: It’s Sheridan!
Richard: How much does he want?

Richard: Hyacinth, do you ever wonder why Sheridan shows very little interest in girls?

Hyacinth: And you are? Regional Postal Manager. I guess you will do, though I would have preferred to speak to someone on a national scale.

Hyacinth: Today could be the day I’m mistaken for somebody important.