Despite its violence, this Dublin gang war saga is well written, performed, and produced, with strong characters and dialogue. 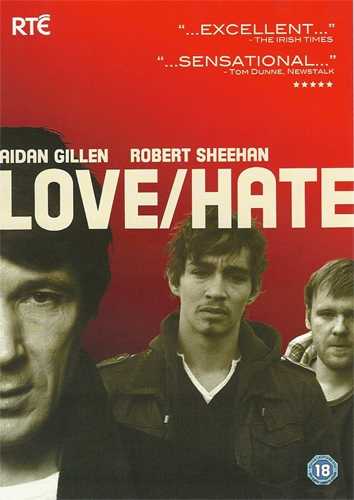 Britain’s Guardian newspaper praised the award-laden Irish gang-war drama Love/Hate, comparing it to The Wire and The Sopranos, saying “what makes Love/Hate distinctive is the way in which the scripts root the mobster genre in the trends and tensions of contemporary Irish culture.” On the eve of the third of its five seasons, The Irish Times hailed the show as “the best drama RTÉ [the Irish broadcasting company] has produced.”

During five gritty seasons, 28 episodes aired from 2010-2014, and three seasons (16 episodes) are available on Netflix instant streaming, including Season One here, from YouTube.

This is an excellent but very dark and violent Irish TV crime series which follows the exploits of an ex-gangster who is propelled back into Dublin’s criminal underworld when his brother is murdered. Modern-day underworld characters Nidge (Tom Vaughan-Lawlor) and John Boy (Aiden Gillen) wrestle for control of Dublin’s illicit drug trade amid the squalor and violence of organized crime that has grown in post-boom Ireland.

Protagonist Darren Treacy (Robert Sheehan) returns to Dublin from Spain, where he was avoiding charges of gun possession. Darren’s brother Robbie is released from prison, and while waiting to be collected, Robbie is shot outside a newsagent’s stand. Catastrophic events ignite tension among the drug gang, and family, friends, and the community must live with the consequences.

In Season Two, Darren is trying to recover from being shot and recurring nightmares, as he tries to persuade girlfriend Rosie (Ruth Negga) to come home from London. When gang leader John Boy pays off his large debt, Darren finds himself trapped under his control again. John Boy, is spooked by the death of his brother Hughie, and his drug habit is spiraling out of control, making him paranoid and erratic.

Nidge, now John Boy’s second in command and principle enforcer (and soon-to-be successor), tries to juggle his tricky personal life (pregnant and suspicious wife) and crime life. When a consignment of drugs is impounded by customs, a war with rival gang leader Fran (Peter Coonan) kicks off.

The series is expected to air on television in the US, with a broadcast date yet to be confirmed, but it has also been suggested that the series could be remade for US audiences similar to other European dramas like The Killing and Wallander. The first three series have also been bought by TV markets in Brazil, Israel and Singapore, joining Australia, New Zealand, UK and South Korea.

The program has generated some controversy. There was criticism for the effect its graphic and explicit portrayals of rape have had on those who had been raped. And an actor playing an undercover Garda (policeman) was revealed to be a real member of the Garda National Drug Unit, leading to an internal Garda investigation.

Creator and writer of 13 episodes Stuart Carolan was also nominated for a best script award for Little White Lie. Most of the brilliant cast is only known in Ireland, but Aiden Gillen has four awards and four nominations for works including this, The Wire, Game of Thrones, and Queer as Folk.