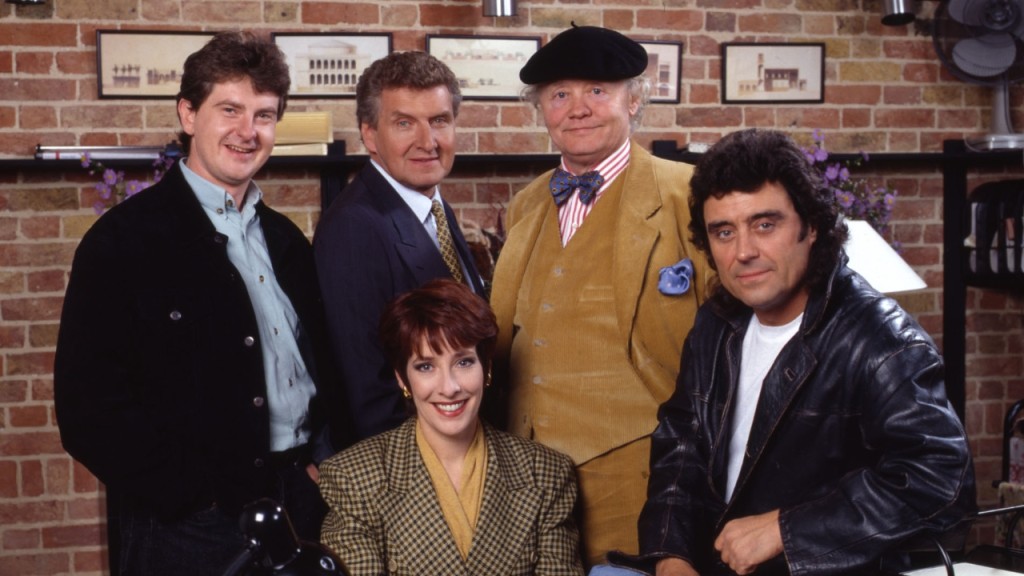 The cast of Lovejoy. Ian McShane is on right.

Ian McShane won scads of awards for and was mesmerizing as a kinky saloon/brothel owner in David Milch’s brilliant American TV series Deadwood, but he was sweeter, more charming and way less dark in 73 episodes of the great 1986-1994 British antiques crime-mystery series Lovejoy. Six seasons and 68 episodes are on Netflix, and many appear for free on You Tube. Here’s one.

Lovejoy is based on the picaresque novels of John Grant, writing as Jonathan Gash. Grant was a doctor and pathologist who developed his knowledge of antiques for his 24 humorous Lovejoy mystery novels (1977-2008) when he was a runner between London street markets during his med school years.

The series was adapted for television by Ian La Frenais, who won eight awards and 13 more nominations, including 12 for writing Tracey Takes On and three for The Commitments. He also wrote Across the Universe and 59 other films and TV shows. Lovejoy was nominated for a 1994 CableACE award. The series had 28 writers.

Lovejoy is a loveable rogue and East Anglia antiques dealer with an amazing talent for recognizing exceptional items as well as distinguishing genuine antique from clever fakes or forgeries. When not looking for the odd collectible, Lovejoy spends much of his time using his con-artist skills to help out the less fortunate.

This fun, highly enjoyable series was notable for its style and pacing. Lovejoy would frequently break the fourth wall, revealing his thoughts and motives addressing the audience directly.

McShane won a Golden Globe, a Television Critics Award, and six other nominations for his magnificent work in Deadwood, as well as an award and six noms for other work.

Phyllis Logan won a SAG award and was nominated for another for playing beloved Mrs. Hughes in Downton Abbey. Thirty years before she won three awards (including “Best Newcomer”).

Between 1960 and 2014 Dudley Sutton appeared in 140 films and TV series, including The Leather Boys, Fellini’s Casanova, The Pink Panther Strikes Again, Up at the Villa, Cockneys vs. Zombies and Fun at the Funeral Parlor.