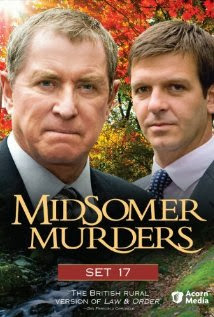 So far, 100 episodes of this dramatic and humorous ‘whodunnit’ set in fictional Midsomer County have aired.

Since 1997, 15 series (100 episodes) of beloved rural British crime mystery series Midsomer Murders have aired on PBS and around the world. Seven of the episodes are based on the books of Caroline Graham, who was nominated for a 1999 “Best TV Feature or Miniseries” Edgar award for it. Many episodes were adapted by gifted scribe Anthony Horowitz (Poirot, Foyle’s War).

More than 90.8% of the 9,106 viewers polled at imdb.com gave it thumbs up, and 29.6% regarded it as a perfect 10. It is a big hit with all demographics, but especially females over 45 and under 18. Viewing figures for the series were healthy, and the drama attracted a number of actors from the stage and screen in guest-starring roles.

Midsomer Murders has been sold to a large number of countries and territories around the world. In 2004 it was among the three most-sold British TV shows worldwide, whether as TV or DVD. Among the many buyers: Ukraine, Bulgaria, Estonia, Iceland, Macedonia, Sri Lanka and South Africa. Through season 13, all episodes are streamed via Netflix, are Netflixed by mail and are on DVD. Here is an episode.

Until 2010, the lead detective was Tom Barnaby (John Nettles). After Nettles’ retirement, Neil Dudgeon took over as his cousin, John Barnaby. The Barnabys have had several sergeant/sidekicks throughout the run of the show. Other key characters are Tom’s wife and daughter and a crusty coroner.

The show is very well-written and -acted. Humor is a main feature of the series, with many actors playing up their high-camp characters. The show includes some black comedy, such as a woman being murdered by a wheel of cheese.
Much of the popularity of the series comes from the incongruity of sudden violence in a picturesque and peaceful rural setting. Individual episodes focus on institutions and practices seen as being characteristic of the English counties. I often enjoy seeing familiar faces among the suspects.

The county of Midsomer is notable for its particularly high murder rate — estimate
at 32 per million, around double that of London. This has become a running joke among the British public. It’s like the joke T-shirts used to promote America’s beloved Murder She Wrote: “Cabot Cove, If you lived here you’d be dead.”

Tom Barnaby’s wife once proposed they move out of their hometown of Causton and suggested various villages; her husband countered with recollections of particularly grisly murders that occurred in each community.

If you haven’t seen it, I think you will enjoy this charming, dramatic crime series.