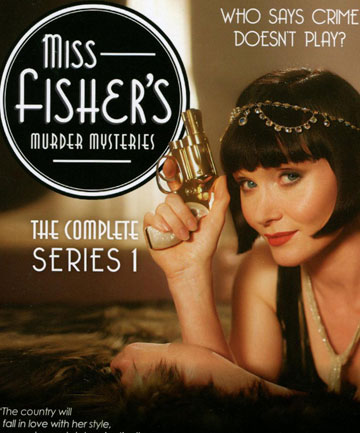 Miss Fisher’s Murder Mysteries is a terrific recent discovery of mine — a fresh and well-produced detective series featuring a 28-year old female sleuth in 1928 Melbourne, Australia. The first series of 13 episodes began airing Down Under in 2012, has been sold to 120 territories around the world, and has already aired on some PBS stations. A second series of 13 episodes began filming in February 2013.

All 13 episodes of the first season are on Netflix, Netflix Instant streaming, and YouTube. Here’s one.

At imdb.com, more than 93.8% of viewers polled gave it thumbs-up and 35.9% rated it a perfect 10. It is strong with all demos, but especially with females 18 and younger.

The series is based on Kerry Greenwood’s Phryne Fisher Murder Mystery novels and was created by Deb Cox and Fiona Eagger. Miss Fisher’s Murder Mysteries revolves around the personal and professional life of Phryne Fisher (Essie Davis), a glamorous private detective in 1920s Melbourne. One of the first feminists, Phryne chooses to live alone and not get married. She’s got many lovers.

With the assistance of her maid Dot and communist cab drivers Bert and Cec, she solves all manner of crimes, including poisoning, strangling, drowning, cocaine smuggling, blackmail, grave robbing, kidnapping, and burglary. She originally annoys but later becomes a trusted ally of Detective Inspector John “Jack” Robinson (Nathan Page).

Phryne is no ordinary female aristocrat, as she can fly a plane, drives her own elegant Hispano-Suiza automobile, and sometimes wears trousers. While displaying bohemian panache, she always maintains style and class. In the first season she wears 120 wonderful costumes, including sleepwear, daywear, nightwear, and special occasion outfits.

The series has been nominated for six major Australian awards so far, including honors for costume design, production design, Davis, and Ashleigh Cummings, who plays Dot.

Just when you thought that all variations of the amateur-detective genre had been explored, along comes Miss Phryne Fisher, who sashays through the jazz clubs of 1920s Melbourne, tackling villains with her pearl-handled pistol. It is worth watching for lead actress Essie Davis, with her sleek bob and killer cheekbones, who runs bad guys to ground with both wit and raunch.

You will thank me (and my cousin Mick Friedberg, who turned me onto it) for introducing you to this delightful new TV series.