Posted on September 9, 2013 by Thorne Dreyer 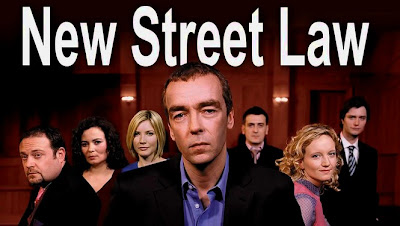 New Street Law was a compelling, well-made Manchester, England, legal series that aired 14 episodes in 2006-2007. All 14 are on DVD and Netflix.

New Street Law features a very fine cast. John Thomson (BAFTA nom for Cold Feet) is very engaging as lawyer Charlie Darling. He has a clandestine relationship with a married female colleague (played by Laura Cazelet, who was harrowing as a prison denizen in Bad Girls). A droll judge is played by an actor I have long loved: Don Warrington (who received Britain’s MBE award and played in 63 Brit series). He was brilliantly hilarious in
Rising Damp, which I have previously reviewed on this blog.

I recommend this excellent series. Partial episodes can be sampled for free on YouTube.