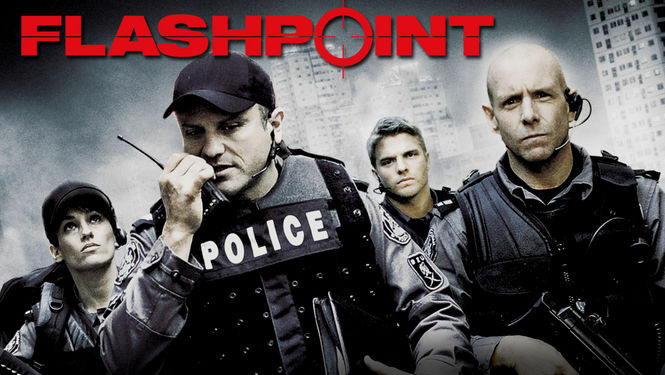 Flashpoint has been nominated for 86 Canadian and international awards and has brought home 22 of the suckers. It is a very well-written TV program. CBS aired five seasons and 75 episodes from 2008-2012, and Netflix discs offers a season of 13 of them.

The series focuses on a fictional elite tactical unit, the Strategic Response Unit (SRU), within a Canadian metropolitan police force (styled on Toronto’s Emergency Task Force). The SRU is tasked to resolve extreme situations that regular officers are not trained to handle, including hostage-taking, bomb threats, and heavily armed criminals, etc.

Equipped with high-tech tools and a cache of weapons and explosives, members use negotiation tactics to try to avoid the use of deadly force, which they exert only as a last resort. The outcome of a given situation is often determined by a split-second decision, which explains the show’s title.

The majority of the cast of Flashpoint are Canadians, including Enrico Colantoni, David Paetkau, Hugh Dillon, Sergio Di Zio, Michael Cram, and Mark Taylor, and they’ve all been nominated for Canadian awards. The exception, American Amy Jo Johnson, the original Pink Power Ranger, performed the first season while pregnant.

The show won Canada’s top TV/film award (The Gemini) as Best Dramatic Series from 2009-2011, along with numerous acting, writing, and editing honors. In 2013 and 2014, it got 19 Canadian Screen Award noms and eight wins. It took a best drama nom and six actor noms at the Monte Carlo TV Fest, plus a couple Writers Guild of Canada awards.

During the 13 episodes I watched on Netflix discs: a father with gun demands next available heart for his dying daughter; an unwitting ex-druggie solicits money from dealer being targeted by a task force; a cop taken hostage on a boat by the sister of a woman he battered is rescued; a lawyer is shot by his son; a teen girl attacked at a mall by other teen girls, shoots one and then attempts to jump from a high building; a parolee with a gun demands to see prosecutor who falsely convicted him; a VIP’s wife is rigged with a bomb by those he wronged; a wife takes a woman hostage believing her husband impregnated her; and a suicidal ex-officer takes SRU headquarters hostage.

Here’s one of those from You Tube.

The pilot episode was based on an actual event that occurred in Toronto in 2004, in which a gun-wielding hostage-taker was shot and killed by an Emergency Task Force sniper. Input and advice from various ETF personnel were used in making the series.

The pilot episode was watched on CBS by 8.23 million people, earning the No. 1 ranking for the hour. Flashpoint is the first Canadian series aired by a major U.S. broadcast network set entirely in Canada. It was sold to more than 50 countries, including Iceland, Croatia, and Thailand.

The show was created by Mark Ellis and Stephanie Morgenstern, who also wrote and created X Company. She has 76 actress credits and in the pilot was the hostage the gunman takes.

Hugh Dillon won three awards, has seven noms, is a rock band leader, and has 42 credits, including Surveillance, Wind River, The Killing, and Twin Peaks. Amy Jo Johnson has six wins, four noms, and has 45 credits including Felicity, Covert Affairs, and The Division. David Paetkau has two noms and 39 credits including Man of Steel, Alien vs. Predator and Just Deal. And Enrico Colantoni has two wins and five noms for Flashpoint and 83 credits including A.I. Artificial Intelligence, Just Shoot Me, Galaxy Quest, and Person of Interest.

An  ideal gift for friends who love intelligent TV and/or films is Alan Waldman’s book, 89 Smart, Foreign TV Series (English-Language Comedies, Dramas and Mysteries from the U.K, Canada, Australia, Scotland, Ireland,  New Zealand & Europe — Plus 362 Favorite Films From 1997-2016. It’s available in paperback for $14.99 from Amazon.com or $9.99 for a Kindle version. Earlier versions of all these reviews appeared on The Rag Blog.