Fitzgerald was a founder of The Rag in Austin and Houston’s Space City! 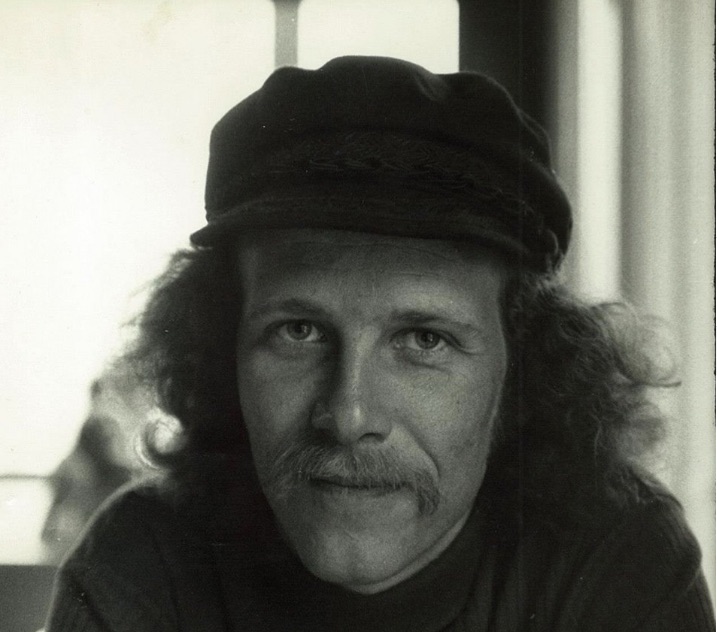 Dennis Fitgerald passed away on December 9, 2018, in British Columbia, Canada, where he had lived for several decades. Dennis graced ‘60s Texas activism with a wry wit and a talent for journalism. When the Rag reunion of 2005 came together, his written memoir stood out for its sweet tone of humility:

I was privileged to be in the delivery room at the birth of The Rag. ‘Breathe, breathe, breathe!’ It was a long, hard labor. But what a beautiful child she was. For just over a year, I changed my share of dirty diapers and delighted in watching her first tentative steps. And then we both had other places to go.

The Rag was where my friends and I tried to figure out who we were. We were hardly more than kids, taking our own first steps into the “real” world, and trying to make sense of the fact that there was so much there that affronted our ideals. Things were a lot meaner and shallower than they were supposed to be. That wasn’t anything we were prepared to conform to, nor, given our idealistic bent, anything that we could in good conscience ignore.

We were a group that found each other and clicked because we shared a common, albeit kind of fuzzy, notion about what was right and what was wrong and what was really important. But we didn’t have a home for all that; we fit with each other, but we didn’t seem to fit anywhere else. The Rag was our owner-built home, a place of safety and purpose, where we could define who we were and get on with the job of saving the world from itself.

I got to know Dennis and his first wife Judy during the dawn of radical student politics in Austin and the birth of Austin’s underground newspaper, The Rag. Dennis and Judy helped launch a kindred paper, Space City!, in their home town of Houston. In 2016, several of us were assembling a book to commemorate The Rag’s fiftieth anniversary. I re-typed an article Dennis had written about the 1967 free speech movement on the UT campus. It was a blow-by-blow description of a week, skillfully capturing the frenetic pace. I marveled at the detail.

Dennis, Judy, and daughter Kelly then
joined an Arkansas commune.

After Space City!, Dennis, Judy, and daughter Kelly joined the Arkansas commune where I also spent some time. We were living “off the grid” with no running water or electricity, up close and personal with nature, ticks and all. I was gone when the FBI paid a visit, tromping down the muddy mountain slope. I heard that Dennis chased them away snapping their photographs. 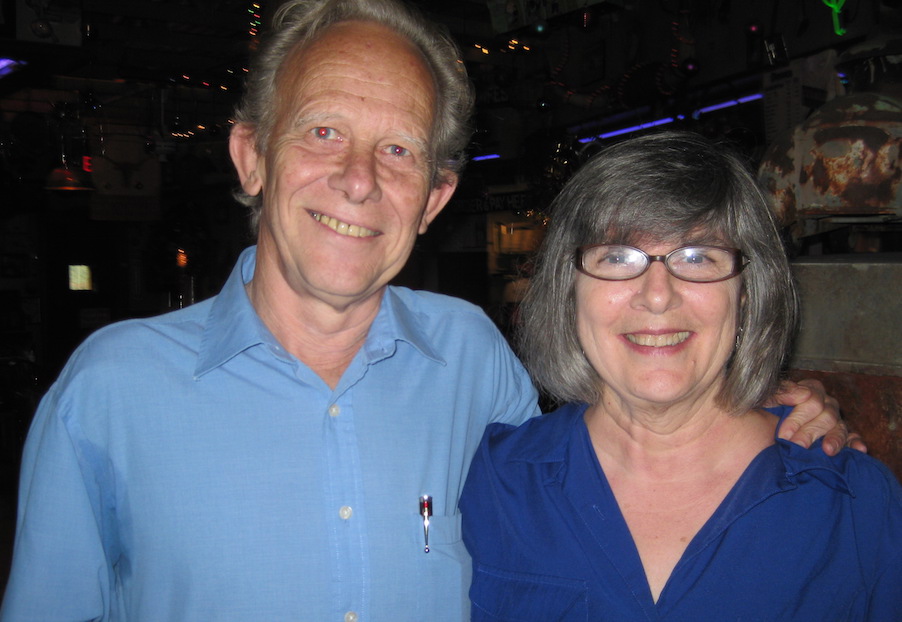 Dennis Fitzgerald and Alice Embree during the 2005 Rag Reunion.

Dennis kept working as a journalist. He was an assistant city editor at the Houston Chronicle and, after migrating to Canada, he was editor of a rural community newspaper near Vancouver. When Dennis returned to Texas for visits with family and friends, his eyes still sparkled with mischief. He had gone from working in sawmills to environmental manager for a lumber company. He kept that sparkle even after he was diagnosed with ALS, or Lou Gehrig’s disease. Although the disease weakened his muscles, he enjoyed the company of children and grandchildren, and he loved the beauty of British Columbia.

Dennis cut his journalistic chops early on. At Bellaire, he edited the Three Penny Press, a daily school paper that was witty, literate, and, in retrospect, surprisingly progressive, while I helped edit the yearbook and Judy and I were duet acting partners. After high school, in 1963, the three of us trekked to Austin where Dennis and I were roommates and minor-league pranksters at an off-campus dorm. Dennis did copy editing at The Daily Texan and the three of us got involved in SDS and helped found The Rag and then Space City! in Houston, and also worked together at Liberation News Service (LNS) in New York.

At one point in Houston, a revitalized KKK went on a tear against Space City!, with car bombings and gunshots fired into our offices. Staffers went undercover to an East Texas Klan cross-burning and recognized a young man named Mike, in full Klan regalia, who had been volunteering at Space City! The next time Mike came ambling into our office, Dennis, all arms and legs, and colleague Cam Duncan, went charging after him, took a leap, and grabbed Mike around the neck — and they all went tumbling to the sidewalk. I wish I still had that photo of Dennis, all smiles, with the horrified Klan kid in a full bore headlock.

While at Space City!, Dennis did an impassioned cover piece about a big rock concert and in his story condemned “rip-off promoters.” As a result, the rip-off promoter in question donated to us the use of a music venue he owned, and Dennis then organized the nonprofit, community-run, and highly successful rock club, Of Our Own.

Dennis was often an unsung hero, with his big heart and his mischievous sense of humor – and with his journalistic skills that helped ground us. His writing was smart and clever. He was one of the best writers in the underground press.

Adios, Dennis Fitzgerald. He was a valued friend, a quietly effective voice of reason in 1960s movements for equality and peace. He had a dry, gentle wit that often punctured blowhards’ soliloquies, without damaging egos too badly.

His daughters honored Dennis’ life with this obituary, posted here as originally published:

William Dennis Fitzgerald of Sechelt, BC passed away peacefully in the Sechelt Hospital after living with ALS for many years. He is survived by his daughters Kelly and Jessica, 1st and 2nd spouses, Judy Gitlin and Judy Gates, son-in-law James, grandsons Arlo and Elijah, and siblings Diane (Natalie), Kerry (Stefan , Mark, and Jake), and Kathy (Erin).

Born in Austin, Texas and raised in Houston, Dennis grew up to be a journalist in a memorable time in American history. Notably, he was a founder and editor of “The Rag”, the longest running underground news paper in the United States, and the youngest city editor for the Houston Chronicle. He was also a civil rights advocate and strongly opposed the Vietnam War. During this time he and his first wife Judy had their daughter Kelly. In the late 1970s the family immigrated to Canada. Here he became an active Roberts Creeker and fell in love with the natural beauty of the Sunshine Coast. After being editor of the Peninsula Times in Sechelt, he had his daughter Jessica with his second wife, also named Judy. He continued to work as a journalist until the 1990s environmental movement when he decided to change the system from within. He worked as a writer in the Public Affairs group with MacMillan Blodel and Weyerhaeuser – specializing in community relations and environmental issues. He was very proud of his influence on the forest industry and made many close friends. Six years ago he was diagnosed with ALS. Despite his health challenges he lived independently in his own home until just a few days before he died. In his later years his greatest joys were hiking, taking friends and family out to eat, and spending time with his grandsons.

He’ll be remembered as an intellectual, proud father, caring activist, and man who did things his own way. An informal burial will be held on December 18th at 1pm at the Seaview Cemetery in Roberts Creek. A celebration of his life will be held on January 12th at 2pm at the Roberts Creek Community Hall.

Donations in his honour can be made to the David Suzuki Foundation.