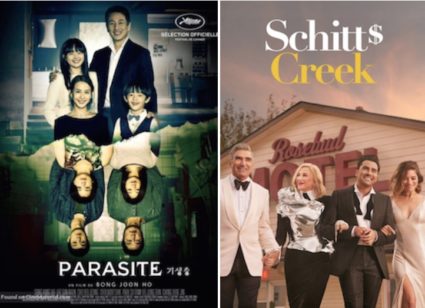 I have been able to see Parasite again on the small screen in Corona-induced isolation. The film won the Palme d’Or at Cannes and won the most Oscars in 2020, winning Best Picture, Direction, International Feature Film, and Original Screenplay.

Parasite may seem to be a strange companion to the upstart 30-minute Canadian series, Schitt’s Creek. But, I can watch both of them in my living room, Parasite via Hulu and the final season of Schitt’s Creek via Netflix. I am struck by the similarity with which they explore the entitlement of the rich.

Parasite is a must-see primer on class warfare. The warfare doesn’t take place in the streets of Paris, but in the small-scale battle between two families. Set in South Korea and directed by Bong Joon-Ho, the film vividly portrays pre-Corona images of extreme global inequality, a chasm that is Korean, Chilean, and as American as apple pie. Neoliberalism has infected societies everywhere.

The wealthy family literally lives on a hilltop.

The wealthy family literally lives on a hilltop, in contrast to the unemployed family who live in a basement in a low-lying slum. Defying genres, the film draws you in through comedy. The movie opens in the basement apartment shared by the parents and adult children where the son and daughter are scrambling for a wireless signal. They move from room to room in their cramped living space until they end up on a ledge in the bathroom, aiming their phones toward a small window at street level.

The wealthy family lives in an architecturally splendid and spacious cocoon, adorned by a manicured lawn and sealed off from the riff-raff by a sturdy, metal gate. The visual contrast is vast. The poor family hunkers down in their cramped and cluttered basement, barely separated from the street where drunks occasionally urinate outside street-level window.

With clever cunning, the members of the unemployed family gradually move into the home of the wealthy, not so clever, family. The son, with forged diplomas, is the first one to get hired. As a tutor for the teenage daughter, he becomes the scout. His sister enters as an art tutor for the younger, unruly son. The takeover of employment in the wealthy home continues.

In the boonies, their exalted status causes eye-rolls from the locals.

For those who may be unfamiliar with Schitt’s Creek, it is the series with the Canadian comedic star power of Eugene Levy, Catherine O’Hara, and Dan Levy, Eugene’s son in real life. Eugene and Catherine play David and Moira Rose in the series while Dan plays their son. The parents in the fictional Rose family also live with their adult children (David and Alexis). They have lost their wealth and status and moved into a motel in Schitt’s Creek.

In the boonies, their exalted status causes eye-rolls from the locals. The Roses are oblivious. Catherine O’Hara, insightfully describes this oblivion as the “captivity of wealth.” The siblings, played by actors Dan Levy and Anna Murray, have to share a motel room. Their mutual disdain is delightful. I am particularly drawn to Ann Murray’s habit of holding her hands in front of her chest. The actress watched footage of the Kardashians and Paris Hilton, studying the way they held clutch purses in public. She then adapted that to a two-handed mannerism that cracks me up and compels me to mimic the gesture every time I see it.

In ‘Parasite,’cluelessness is also displayed in cinematic brilliance.

In Parasite, cluelessness is also displayed in cinematic brilliance. The privileged housewife is oblivious to the con jobs of the impoverished in her midst. The rich are conned because they are in their captivity bubble of privilege. They have no idea how the other 90 percent live. They lack observational skills. On the other hand, the poor have spent their lives observing, and serving, the rich. They are brilliant as they insert themselves into the home life of the wealthy.

Alexis Rose clutches her hands. Moira Rose parents her children with the narcissism we see in the White House, distant and obsessed with appearances. The housewife in Parasite outsources all housekeeping and parental roles to a clever cabal that has laudable family solidarity.

As muddy, treacherous floodwaters gather at the door of the South Korean basement, toilets overflow. The wealthy are unaffected on their hilltops. After the flood, the movie’s climax takes place on the manicured lawn of the rich.

In Schitt’s Creek, the locals carry on their lives with eye-rolling indifference. Let’s just say that there is no such happy ending on the screen in Parasite.