Alice Embree on Political Activism : Carry it On 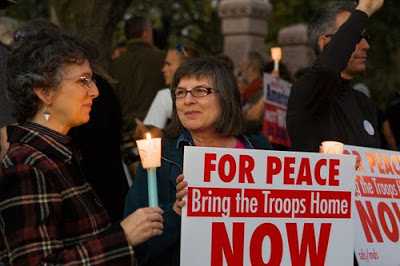 Alice Embree, holding sign, participates in anti-war vigil at Texas State Capitol, March 19, 2008. Photo by CodePink/Austin.
On my political activism:
Carry it on

[On March 30, Long-time Austin activist David P. Hamilton wrote an article in The Rag Blog announcing his “retirement” from political activism. He discussed his disillusionment with Barack Obama, whom he worked hard to elect, and with American democracy, which he considers “irretrievably corrupted.” For David, the passage of a health care reform bill that he considered a sham was the final straw, and — at 66 — he said he’s “passing the torch.”]

I’m responding to David Hamilton’s retirement notice posted on The Rag Blog last week. Everyone should get to retire or take leave from the movement for social justice. It’s never been a paid job and the benefits certainly haven’t included major medical or dental care.

We don’t need burn-out. But we desperately need persistence. We all must find a balance between what replenishes and what depletes us. For years I have identified with Marge Piercy’s poem, “To Be Of Use.” But, her guidance in “Spring Offensive of the Snail” may be more important.

I cannot live crackling
with electric rage always.
….
This time we have to remember
to sing and make soup.

We can’t lose faith in the struggle for social justice because Obama delivered an expanded war and a Wall Street bailout and failed (never really trying) to deliver a public option for health care. If our faith was in electoral politics, it was misplaced.

My post-retirement activism has been both rewarding and difficult. Bush’s election in 2000 was discouraging, but was nothing compared to watching the hopes of a worldwide peace movement dashed in March 2003 and Bush re-elected in 2004.

I have found strength in the efforts of others — Cindy Sheehan sitting in a ditch near Crawford; CodePink with their theatrical stunts and dogged determination. I’ve found hope in an emerging GI movement that I support with work on a Killeen coffeehouse. I’ve turned out for Texas State Employee Union campaigns and felt the solidarity of a statewide union. I’ve supported the organizing efforts of immigrant workers. I’ve picketed a private prison that housed children and seen it shut down by persistent community organizing and dedicated attorneys. In El Salvador I was an election observer to an historic left victory. I’ve chronicled some of this for The Rag Blog.

At the same time, I’ve been dismayed by the escalation of war and the inept presidential leadership on health care. I’ve been saddened by the earthquake in Chile and truly disheartened by the election of a right-wing president in a country I care for. There have been plenty of setbacks.

In Austin, the beloved “progressive” city, I’ve watched East Austin get re-shaped by developers with hardly a murmur from progressives. Dismissing the term “gentrification” as too polite, union organizer and writer Bill Fletcher, says: “We need to stop the class and racial cleansing of our cities… where workers are being driven out of cities…” A piece of this might be ending — in the simple name of democracy – the costly, at-large electoral system here. Austin is the only large city in Texas with this legacy representation.

Decades ago, Mariann Wizard wrote a farewell poem to Austin entitled “Sweet Suck City.” That is what I often think of this town, so steeped in its own coolness.

On March 8th, I was impressed by the International Women’s Day event in San Antonio — it’s 20-year staying power, its link to the current struggle of hotel workers, its multiculturalism. I’m sure it’s easier to admire that coalition from afar than to invest the day-to-day effort it takes to maintain unity. But, trust me, I haven’t seen anything like that kind of coalition work in Austin, Texas.

So where does this take us? What is to be done? For starters, make some soup, tend the basil, and then read Howard Zinn’s, You Can’t Be Neutral On a Moving Train.

Walk the dog and then think about what small thing you can do. Give a donation to the Workers’ Defense Project. Host a fundraiser for Iraq Veterans Against the War. Help Killeen’s Under the Hood Café. Help subsidize community organizers who want to attend the next U.S. Social Forum in Detroit.

This struggle isn’t about Obama. I heard Bill Ayers describe Obama very well at a SXSW panel. “He’s a centrist and an ambitious politician.” Ayers recounted Obama’s answer to a campaign question about whom Martin Luther King, Jr. would support. Obama responded, “He’d be building a movement.”

Bill Fletcher, a labor union strategist, said Monday, “As a socialist, I know something about socialism. Obama is not a socialist.” But, Fletcher didn’t apologize for voting for Obama. During the election season, I registered voters, made some calls, walked some precincts and went to a county convention. Those hours spent were a drop in the bucket compared to meetings, vigils, marches, fundraisers, and other events invested in social justice causes.

I believe that electoral politics is a game stacked for capitalist centrists. We don’t have proportional voting in this country that allows smaller parties to gain some long-term representation and traction. We have a winner-take-all, electoral-college system. And now, with the Supreme Court decision, corporations will be given even more decisive electoral power.

Progressive change has always happened in this country through organizing and demanding change of politicians. What we need even more than activists at this time are organizers. We cannot concede organizing to the right wing.

A union friend of mine reminded me that the left often likes to hold up a flag and see who will come to them instead of going to people. Whether it’s through “working people’s assemblies” as Bill Fletcher suggested or through other means, this is a time not to mourn, but to organize. Fletcher reminded a roomful of union folks that F.D.R.’s New Deal didn’t happen in a vacuum. Union leaders came to him with a set of demands and he said: “Make me do it.” They organized. He responded. That’s how change happens.

But do remember to tend the basil, enjoy the grandchildren, and make the soup.

9 Responses to Alice Embree on Political Activism : Carry it On