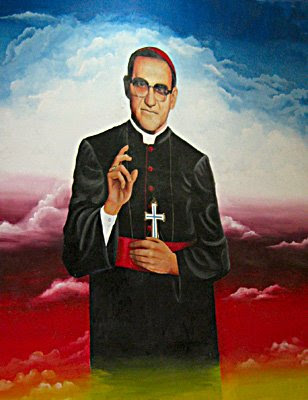 Mural at the National University of El Salvador depicting the late Archbishop Oscar Arnulfo Romero, assassinated in March 24, 1980. Photo by Alice Embree / The Rag Blog.
Liberation theologian and advocate for the poor, El Salvador’s Romero was assassinated 30 years ago today.

[This article is part of a series on El Salvador being written by Alice Embree. Embree was an official observer during the recent presidential elections there and sent dispatches to The Rag Blog using the byline “Al.”]

Twenty-nine years ago today, on March 24, 1980, Archibishop Oscar Arnulfo Romero was assassinated in El Salvador. He was celebrating mass in a small chapel. As he raised the communion chalice a bullet tore through his heart.

Romero was an advocate for the poor, a defender of human rights and a proponent of liberation theology. His funeral on March 30th drew mourners from around the world. A crowd estimated at 250,000 packed the plaza in front of the Cathedral. During the funeral, the military fired shots into the crowd from the buildings above, killing more than thirty mourners.

A memorial wall in San Salvador bears the names of nearly 30,000 of the dead and disappeared –- names gathered as part of a Truth Commission at the end of El Salvador’s civil war. Romero’s name is there as are those of the four U.S. churchwomen raped and murdered in December 1980. An entire panel lists the places where civilian massacres took place.

1980 was a turning point for El Salvador. Romero’s assassination brought the small Central American country to the attention of the world. It was also the year that the Frente Farabundo Marti para la Liberacion Nacional (FMLN) was founded. The five largest guerrilla movements in El Salvador united to form the FMLN as a single political-military force in October of 1980. With the signing of the U.N. Peace Accords in 1992, the FMLN was legalized as a political party.

October 1980 also saw the founding of the Committee in Solidarity With the People of El Salvador (CISPES) in the United States. For nearly three decades CISPES has promoted solidarity with El Salvador and mounted opposition to the U.S. military aid and training, propping up El Salvador’s death squad government. During the 1980s, El Salvador became a Reagan experiment in “low-intensity conflict.”

The ARENA party has held the presidency of El Salvador since 1989, presiding over the signing of CAFTA and economic policies that concentrated wealth and privatized public services. On March 15th the FMLN won the national election. Mauricio Funes was elected president and Salvador Sanchez Ceren, a former guerrilla combatant, was elected vice-president. In his acceptance speech, Funes dedicated his victory to the memory of Archbishop Oscar Romero.