David Fenton’s ‘Lessons From Fifty Years as a Progressive Agitator.’ 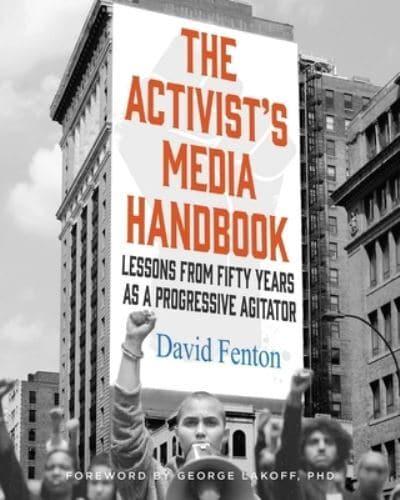 For those of us devoted to peace, democracy, social justice, and the survival of our beautiful planet, this “Activist’s Media Handbook” can be very useful and informative.

It is also interesting and entertaining to read.

To me, the word “lessons” in the subtitle is crucial. With the U.S. House of Representatives being controlled by the Republican Party — a party largely overtaken by right-wing extremists — we have a big job to do if we want progress. Therefore, “lessons” — ideas and information and tactics — to help us succeed in that job are much needed.

David Fenton, who offers us these lessons in a large-size book (not really a “handbook”) recounts his evolution as an activist to educate us in the context of real life. Thus, the book is essentially a memoir, too. That might irritate some readers seeking something more universal or generic, but I found it enjoyable because he has a good story to tell.

I met David Fenton precisely at the historic era where the book begins.

One reason that I liked the book so much — including the autobiographical format — is that I met David Fenton precisely at the historic era where the book begins. That’s the late 1960s, when I was immersed in the underground press as a full-time staff member of Liberation News Service (LNS). 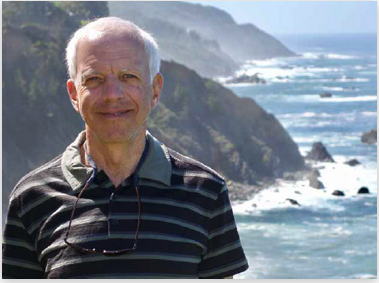 Fenton was a precocious high school dropout in his mid-teens, and I met and mentored him when he came to work for LNS, which has been described as the Associated Press of the underground press. Thorne Dreyer of Austin’s Rag was with LNS around the same time.

Young Fenton had already been making money selling photographs to the media, but at LNS he was granted structure and support for full-time work. His photographs of the anti-war movement (including demonstrations and the Chicago 7 trial), the Black Panthers, rock stars, and many aspects of the counterculture were widely published — seen by millions across the country.

He began a friendship with Abbie Hoffman, and was impressed by the way Abbie used plain talk and humor, garnering much media attention to become an effective anti-war icon.

This was the time of  ‘sex, drugs, and rock and roll.’

This was the time of “sex, drugs, and rock and roll,” as well as “tune in, turn on, drop out,” and also “power to the people, off the pig!” Fenton sorts this all out with nuance, criticism, and self-criticism that is reasonable and honest but never self-aggrandizing.

After leaving LNS, he spent six years in Ann Arbor, Mich., leading a somewhat wild life incorporating community politics and communal living with new mentors including John Sinclair and his wife Leni. Fenton helped put together a rally and political message to free the jailed John Sinclair who had given a couple of joints to an undercover cop. He started to take shape as a leader and now, almost 70 years old, Fenton continues to lead.

After Ann Arbor, Fenton worked effectively on behalf of Musicians for Safe Energy (MUSE), focusing on a concert and album that brought some top musicians to oppose the construction of new nuclear power plants. “No nukes” was the newest message. 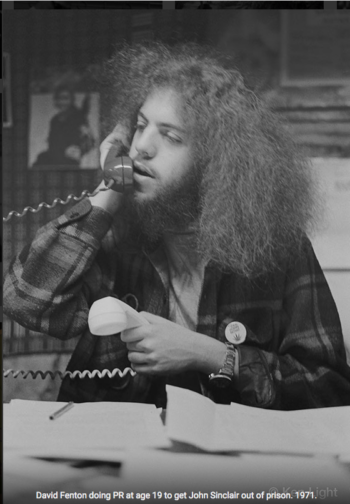 Messaging became Fenton’s profession and business when he founded Fenton Communications, Inc., which still exists. The bulk of the tome is about the work that Fenton Communications did for a variety of nonprofit organizations and even some foreign leaders such as Michael Manley of Jamaica.

He crossed paths with some rather notable people.

Fenton was central in formulating the approach of his company so that it would make money and be effective, as he met with philanthropists and movement leaders. He crossed paths with some rather notable people, including Fidel Castro, Nelson Mandela, Bishop Desmond Tutu, George Soros, Richard Branson, Bonnie Raitt, Al Gore, and others. He dubs some of these people as saintly and tells about arguing with some, too. Nuance and balance — two concepts I happen to favor myself — pepper his narrative.

I admire the way that Fenton gives credit to staff members of Fenton Communications, his attorney, editors, and mentors who helped form his awareness and views. Sure, the company bears his name, and he spent time with celebrities, but I do not experience him as a braggart.

Lots of photographs, most from his own archive, illustrate the book along with reproduction of newspaper ads Fenton placed on behalf of nonprofits such as Moveon.org, Greenpeace, and many others.

He discusses the use of language a lot, pointing out that the right wing has often been better at this, with “Make America Great Again” as one example. Likewise, he offers “Defund the Police” as an example of faulty, misleading and harmful messaging. More than once, he describes the dangers of zealotry and dogmatism. He is clearly not one to embrace the new “woke” approach to political discourse.

Speak to the heart first, the mind second.

A summary of “Communication Rules for Activists” is offered early in the book (grammarians: note the use of the imperative mood) – and here are the abbreviated rules: “Craft simple messages everyone can understand. Speak to the heart first, the mind second. Stories need good and bad characters. Repeat, repeat, repeat your messages. Practice framing issues your way. Use symbolism. Tell the truth. Ensure you are reaching people by using advertising. Recruit celebrities, influencers, and cultural figures. Fight falsehood and disinformation immediately. It’s who you know.”

A similar summary of lessons is offered entitled “Organize to Win.”

The book is filled with practical ideas which can be used by anyone working on progressive causes whether in the Democratic Party (as I do in my small town in Massachusetts), local politics, or organizations working on issues such as racial justice, income inequality, clean energy, homelessness, affordable housing, and the climate crisis.

Fenton sees the issues around climate change as the most crucial, ending his book on that note — and the urgency is clear. If we follow his lessons, maybe we’ll have some luck and make progress. We all could use a good dose of optimism.

[Allen Young has lived in rural North Central Massachusetts since 1973 and is an active member of several local environmental organizations. Young worked for Liberation News Service in Washington, D.C., and New York City, from 1967 to 1970. He has been an activist-writer in the New Left and gay liberation movements, including numerous items published at The Rag Blog. He is author or editor of 15 books, including his 2018 autobiography, Left, Gay & Green; A Writer’s Life — and a review of this book can be found in the Rag Blog archives.]