Alyce Guynn : Blue, Black and In Between 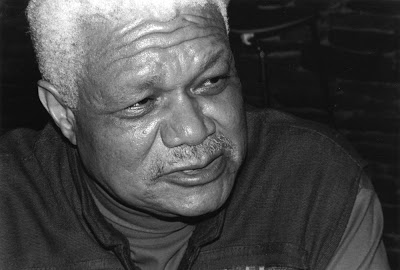 Have you seen her dressed in blue? ….
She comes in colors everywhere
She combs her hair; she’s like a rainbow
Coming, colors in the air
— Rolling Stones

I’ve been contemplating the color blue
cultivating it, humming a Rolling Stones’ tune
reading Al Young’s Something About the Blues.
I love his take on the blues; I love his blackness.
More alluring, his kind of story-telling poetry.
More alluring for this whitey, honky Hillsboro hick,
than Elizabeth Bishop’s – don’t get me wrong –
I enjoy Bishop in small doses, very small doses.
With Young, I can put away the teaspoon,
pick up the oversized cup, drink and drink his words,
steeped in music. The music of which he writes is part
of the poetry he makes. The blues.

Blues don’t make you mean; they leave you moved.
The blues can move you to music, move you to poetry.
They can move you to wiggle your bottom, shake your booty,
dance naked, alone in your living room while a full moon
waxes just enough so the man in it looks at you a little lopsided.
That being not the once-in-a-blue moon, but the big ole’
yellow one that invokes images of veaudeaux magic
and humid nights listening to a jazz saxophone.

Can a white girl call him Trane? I think not. It is far too intimate, a term of endearment reserved for his peers. To me, he will remain Coltrane. Just as it would be despicable for me to express the same intimacy two black people can share when they fondly refer to each other as nigger. Even Charlie Mingus and Dizzy Gillespie said jazz was nigger music.
That’s okay.

It was not okay when my uncle would reach over, turn the dial from my favorite radio show, saying I’m not going to listen to that nigger music.
That was not okay.

And it wasn’t even jazz. Probably not even the blues. More ’n likely it was early rock ’n’ roll; quite likely it was from a musician of color, for those were my favorites then: Little Richard, Chuck Berry, The Coasters, The Platters, The El Dorados, Hank Ballard.
Oh, Hank Ballard.

Those songs weren’t what you’d call blues. Howlin’ Wolf, Muddy Waters, Jimmy Reed – those were blue. They were all black. It wasn’t until later I learned to appreciate the mind bending Miles, the cool, cool Coltrane, the crazy chaos of Charlie Mingus. But they knew the blues, long before they called it jazz. It was Duke Ellington who said,
Jazz is just a word.

It was much more than that for me in my late teens. For us, my group at college, it was a way of life. They (not we) called us The Jazzers. We disdained the sorority girls and fraternity boys while we formed our own. We didn’t wear any Alice Blue gowns, I guarantee you. It was black tights for the girls, fruit boots for the guys. We had our own dress code just as surely as did the penny loafer and pleated skirt crowd. It’s no longer black tights for me.
Now I running toward the blues.

Recently, I bought a straw hat, mostly for the wide headband and gargantuan bow in one of the most beautiful shades of blue silk shantung I have ever seen. I went searching for a way to call it. On the Internet I found a palette of blues where the one nearest to white was called “Alice Blue” named after Teddy Roosevelt’s daughter Alice, for whom in 1919 the song “Sweet Little Alice Blue Gown” was penned. Presumably the “Alice Blue” was the shade of her gown memorialized in song. People in my home town had long memories, for even though the song was popular in the twenties, they still quoted it when, in the late forties, they encountered sweet little me. I didn’t want to be Sweet Alyce then or later as a teen. I wanted to be tough – Camel-smoking, boot-stomping, whiskey- drinking tough.
I never was.

I am and always have been Sweet Alyce to the core. It is my nature to be more sweet than tough, which is not to say I can’t pitch a fit and break a lot of glass.

I love it now: my sweetness, my pastelness
that goes better with grey hair.

And while I don’t like to have the blues,
I love to listen.

I’ve been pondering blues.
Expanding the palette: a head band here,
a dangling blue opal there,
a carved blue agate cameo ring
dishing up a huge helping of Young,
slicing out a sultry evening with Coltrane
Seriously Reconsidering with Lowell Folsom
and Hiding Away with Freddie King.

Blues don’t make me mean or even melancholy.
They make me move, they melt me, bring me to a boil,
simmer, shimmer and shake, curl my hair.
They rattle my bones, ease my mind.