America’s Unpleasant Tendency to Bury the Past 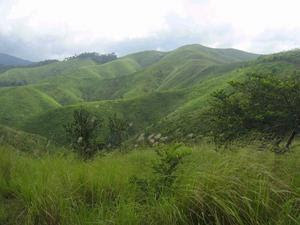 Agent Orange Landscape. This area was defoliated with dioxin at the request of the South Vietnamese. The VC were attacking their training bases nearby from the hills. It now looks a bit like Scotland. Photo source.
Obama please note: Those who fail to ‘master the past’ are guilty, too
By Roger Pulvers / March 1, 2009

In “Guilt About the Past,” based on guest lectures that Bernhard Schlink gave at Oxford University last year, the University of Berlin law professor describes the “long shadow” cast by the perpetrators of war crimes on their descendants.

“The act of not renouncing, not judging and not repudiating carries its own guilt with it,” he states in the book published in January by University of Queensland Press.

Last week in this column I discussed issues of guilt and atonement as they relate to Germany and Japan. This week I will examine how concepts of responsibility and self-questioning apply to the United States of America.

U.S. presidents, secretaries of state and defense, and members of Congress are certainly quick to point out perceived human rights’ abuses and political crimes committed in other nations. The assumption is always that the U.S. occupies the moral high ground of human dignity — so allowing Americans to believe in themselves as altruistic and selfless.

OK, they tell themselves, we have made mistakes; but our actions have always stemmed from pure motives. Others’ evil actions are motivated by intolerance and greed; our own regrettable actions are aberrations.

In fact, buried deep in America’s moral high ground are the bones of millions of victims of whom most Americans seem purposefully oblivious.

Schlink speaks of the need to “master the past” — that is, to come to terms with your nation’s crimes through law, atonement and reconciliation for all involved. If Americans wish to avoid repeating the tragic blunders and crimes committed in Vietnam and Iraq (to name just two war zones), they would do well to heed his message:

“Guilt also reaches those who do not actively separate themselves from the perpetrators and participants through dissociation, judgment or repudiation.”

In other words, it is not sufficient to merely “regret” past actions and believe that “looking forward” and “getting the country moving again” are substitutes for atonement. Future generations must, to use Schlink’s term, “master the past” by taking responsibility for it. Americans demand this of others — why not of themselves?

The U.S. is guilty of conducting the most massive campaign of chemical warfare since World War II — far exceeding anything perpetrated by Saddam Hussein against the Kurds of Iraq. Between 1962 and 1970, American planes sprayed the countryside of Vietnam with dioxin in order to defoliate wooded areas its opponents used to hide themselves and their supply routes from aerial observation.

Of the 3 million Vietnamese estimated to have been exposed directly to this dioxin (known in the U.S. as Agent Orange), 1 million are acknowledged to have suffered serious health problems as a consequence. In addition, some 150,000 children have been — and continue to be — born with birth defects attributed to the use of this weapon of mass destruction.

However, all appeals by Vietnamese officials to the U.S. to apologize and pay reparations or compensation have fallen on deaf ears. The U.S. government has awarded up to $1,500 a month to the 10,000 U.S. service personnel adversely affected by Agent Orange. Why hasn’t this been extended to non-American victims?

What is the difference between this and Japan’s discrimination against non-Japanese radiation victims of Hiroshima and Nagasaki? Why are Americans so averse to recognizing guilt for actions toward others?

This tendency to bury, rather than master, the past is all the more conspicuous when crimes are being committed in the present.

The U.S. spearheaded an illegal war, based on false premises, in Iraq, and for the past six years has killed, maimed and traumatized millions of that country’s citizens. Most Americans now consider the war a strategic error. But has anyone in power, even President Barack Obama, who opposed it from the beginning, spoken in terms of guilt and atonement? Do Americans care about the fates of those millions of people whose lives their state’s actions have ruined?

Several weeks ago, Patrick Leahy, chairman of the Senate Judiciary Committee, proposed the establishment of a truth commission to investigate illegal practices by members of the Bush administration. Yet President Obama has repeatedly stated his opposition to this, instead declaring that he wants “to get it right [by] moving forward.”

There’s the political rub. By proposing “change we can believe in,” as Obama has, you emphasize the importance of the future by bypassing serious reflection on the past. It’s as if you go to the PAST file, highlight it and hit the DELETE button. Then you simply create a new file headed NEW IDEALS.

As Schlink puts it, ignoring past crimes entangles you in them whether you like it or not. He writes:

“The principle is as follows: to not renounce the other includes one in that person’s guilt for past crimes, but so that a new sort of guilt is created. Those in the circle of solidarity who are themselves not guilty through actions of their own, bring about their own guilt when . . . they do not respond by dissociating themselves from those who are guilty.”

For instance, Americans are naturally perturbed by the intense animosity expressed toward them by Iranians — yet they seem ignorant of the fact that their Central Intelligence Agency, together with British intelligence, engineered a coup against Iran’s democratically elected government in 1953. Similarly, if the governments of Venezuela, Bolivia, Nicaragua and Chile have vented criticism against the U.S., wouldn’t it be helpful if Americans were aware of their country’s active intervention in Latin America to subvert the development of democratic processes?

These are old stories. Yet they need to be analyzed not as strategic or tactical errors, but as seriously unethical transgressions.

The Obama ideology of “moving ahead” without attempting to redress past wrongs implicates those in the present all over again. Even as the Obama reboot sweeps the old icons from the screen, Americans would do well to remember that the virus remains deep in the system.

What, then, is to stop them from instigating new fiascoes that result in untold misery and death? The smiling face of President Obama on the screen saver is no protection against the virus.

The era of U.S. exclusivity and pre-emption, so misinterpreted and degraded by George W. Bush and his advisers, is over. This means that Americans will be judged worldwide by the same standard once — and still — applied to Germans and Japanese.

“One deserves to be proud only of what one achieves, not of what one is,” writes Schlink in “Guilt About the Past.”

“Instead of assuring the younger generation that they have the right to be proud or denying them the right, we owe it to them to integrate the past into our collective biography.”

What will be the world’s collective view of post-Bush America? Americans should take a cold hard look at their past, as they so require of others. The world will forgive what is admitted to and atoned for. Without admittance and atonement, there is no moving forward. The positive example of Germany and the negative example of Japan should be ample testimony to that.

[Roger Pulvers is an American-born Australian author, playwright and theater director, and a professor at Tokyo Institute of Technology.]

2 Responses to America’s Unpleasant Tendency to Bury the Past