And We Aren’t Gonna Take It Anymore!! 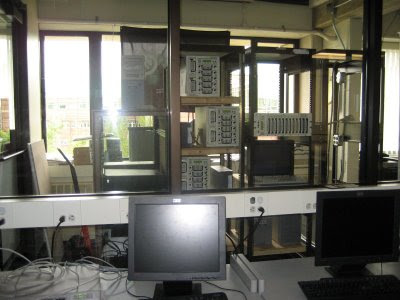 Room 641A is an alleged intercept facility operated by AT&T for the U.S. National Security Agency, beginning in 2003. Room 641A is located in the SBC Communications building at 611 Folsom Street, San Francisco, three floors of which were occupied by AT&T before SBC purchased AT&T and changed its name to AT&T. The room was referred to in internal AT&T documents as the SG3 [Study Group 3] Secure Room. It is fed by fiber optic lines from beam splitters installed in fiber optic trunks carrying Internet backbone traffic and, therefore, presumably has access to all Internet traffic that passes through the building. Source.
Rights Group Suing AT&T for Spying Will Sue Government Too
By Ryan Singel / August 22, 2008

A civil liberties group suing AT&T for helping the government warrantlessly spy on Americans isn’t abandoning its lawsuit after Congress voted to give retroactive immunity to the nation’s telcoms.

Instead, the scrappy San Francisco-based Electronic Frontier Foundation now says that it will expand its efforts and sue the government over the spy program that operated outside of the court system for more than six years.

“If Congress wants to shut down one avenue, we will go down another,” EFF legal director Cindy Cohn said, noting that the amnesty provisions in the FISA Amendments Act of 2008 do not apply the government itself as the Administration had first wanted.

The full extent of the government’s warrantless spying has yet to be revealed, but it is reported to involve massive data-mining of Americans’ phone records, and broad wiretapping of communications that enter or leave the U.S. border .

After the portion that targeted Americans’ international communications was submitted to the nation’s acquiescent secret spying court for blanket approval in January 2007, the program was quickly found to be illegal.

That prompted the Bush Administration to scare Congress into giving it wide, but temporary powers to turn American internet and phone companies into de facto extensions of the nation’s spooks.

After a few months of standing up to the Administration’s typical terrorism rhetoric, a Democratic-controlled Congress caved to political pressure in July and handed a significant victory to President Bush by approving retroactive amnesty to telecoms that spied on Americans without following the st helping the government warrantlessly and secretly spy on Americans.

Other groups have attempted to sue the government over the warrantless spying, but even the most successful of them have eventually failed since the plaintiffs can’t convince a court that they were spied on.

The EFF will rely on the same evidence its civil suit does — wiring documents and a signed declaration from former AT&T engineer Mark Klein. Klein alleges that AT&T siphoned off internet traffic into a secret room in San Francisco controlled by the NSA. (See Wired.com’s publication of the Klein documents that remain under partial seal in federal court.)

Though the EFF didn’t want to sue the government originally, the amnesty issue forced their hand, according to Cohn.

Cohn admits the government has many sovereign immunity defenses that can protect it from lawsuits, but says they aren’t insurmountable and that the program clearly violates the Fourth Amendment.

Lawyers for both sides will meet with the judge in the case in early September, setting a likely date for the next court appearance in December.

The case is known as Hepting vs. AT&T.

2 Responses to And We Aren’t Gonna Take It Anymore!!