ASYLUM, TERROR, and the FUTURE #3 Crying Babies based on cases stories of Jennifer Harbury from Anne Lewis on Vimeo.

“Having children does not give you immunity from arrest and prosecution… I would cite the Apostle Paul and his clear and wise command in Romans 13 to obey the laws of the government because God has ordained the government for his purposes.” — Attorney General Jeff Sessions.

It’s hard to imagine young children being taken away from their parents. It brings with it flashes of scenes from the Holocaust or, closer to home, slave auctions and American Indian Residential Schools.

“Zero tolerance” was inherited from the Bush administration, continued through Obama with families housed together in private prisons. It was at least partially discontinued at T. Don Hutto under strong social protest led by Grassroots Leadership, but the idea of punishing parents through separation and hardship directed towards children remained part of immigration policy. In April 2018, the Trump Administration specifically implemented separation of children from their parents at the border.

As a result, in six weeks, thousands of immigrant children were separated from their parents. On June 15th, the Office of Homeland Security announced a figure of 1,995 during that short period of time. This figure did not include families that used an official crossing, claimed asylum, and then were separated. 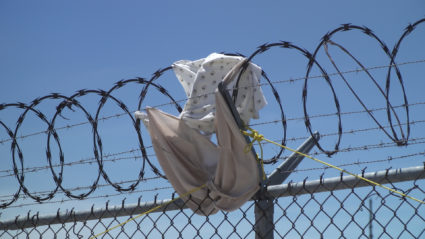 On June 18, as reporters waited for Secretary of Homeland Security Kirstjen Nielsen to brief them, they listened to an almost 7-minute tape of children crying in detention after being separated from their parents. It was the moment of truth. No longer able to separate their humanity from expediency and arguments of deterrence, they asked Nielsen questions like, “How can this not be child abuse?” On June 20, 2018, Trump gave in, blaming the policy on Democrats in Congress, and agencies tried to figure out how to reunite the separated families. The nation tried to forget what we had done.

This video episode includes Jennifer Harbury, who was the first to receive the tape and was responsible for it getting out. Segments of the tape are pulled from ProPublica’s site; none have any internal editing.

We see refugee families stuck on the Matamoros side of the border and hear Jennifer’s description of border guard attitudes towards a pregnant and sick teenager on the bridge.

We still are not clear how many children remain separated and ways in which the policy mutates and continues to this day.