Asylum, Terror, and the Future #4 Hieleras from Anne Lewis on Vimeo.

“The hielera was freezing cold. It was so cold that my son’s lips began to chap. His lips were so chapped that they burst and his lips were bleeding.”

“I was held with a woman who had an 8-day-old baby. The baby was screaming and crying because it was so cold. The little baby was forced to lie on the cement floor because there were no beds. The women all begged CBP to do something to help this baby—to give it a blanket, give the nursing mother extra food, or let the baby’s mother be processed first so that the baby could leave, but CBP refused.”

A class action case filed in June 2015 alleges “freezing, overcrowded, and filthy cells in violation of the U.S. Constitution and the agencies’ own policies.” Photographs unsealed in 2016 remain some of the few pieces of visual documentation.

This short video contains descriptions of conditions from Jennifer Harbury. We see refugees on the bridge in Matamoros, Mexico. They wear warm clothing in 90 degree heat, knowing that they are close to the head of the line and will be taken directly to hieleras. A refugee notices the sun and shares her umbrella with an aide.

Hieleras or iceboxes are frigid, concrete, supposedly short-term detention cells run by U.S. Customs and Border Protection. They hold men, women, and children — even babies. These days everyone who turns themselves in to the border patrol goes straight to the hieleras — including unaccompanied minors. The detained are stripped of warm clothing and blankets; denied adequate food, water, medical care, and basic hygiene items like diapers and sanitary napkins; and held incommunicado for days at a time. 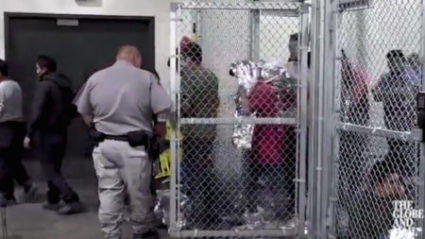 We now know that five children from Guatemala have died in and because of conditions in the hielaras this year. There are more. We don’t know their names or where they were from.

Carlos Hernandez Vásquez, a 16-year-old, was found dead May 20, 2019. Video sent to the family shows Carlos healthy and waving in a raft crossing the Rio Grande just days before he was found unresponsive in a U.S. Customs and Border Protection cell in south Texas. At that time a virulent strain of flu was sweeping through the McAllen hielera where he was held.

Two other Guatemalan children, seven and eight years old, died in CBP custody in December and a two-year-old who fell ill while in custody died in a hospital in May.

These are “black boxes.” There is no recording from within them other than shots provided by CBP. People who provide help, sanctuary, and access to medical treatment for families released from hieleras report a level of human misery rarely seen by most of us. The conditions released refugees describe in the hieleras amount to torture and child abuse.