Another Almost Forgotten Story of a Silent Hero 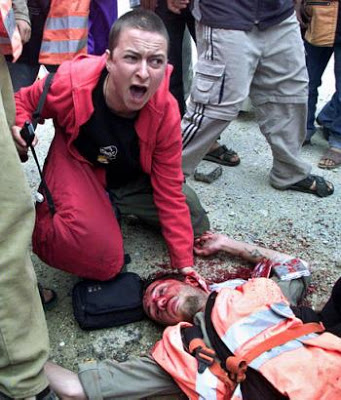 Alice Coy cries for help as she holds her hand over the head wound of British peace activist Thomas Hurndall, who had been shot in the head moments earlier in Rafah, southern Gaza Strip, Friday, April 11, 2003. Thomas Hurndall, age 21, from Manchester, England, had been standing between Israeli troops and Palestinian children when Israeli soldiers opened fire. Photo: AP Photo/Khalil Hamra.
A brave man who stood alone. If only the world had listened to him
By Robert Fisk / March 28, 2009

I wish I had met Tom Hurndall, a remarkable man of remarkable principle

I don’t know if I met Tom Hurndall. He was one of a bunch of “human shields” who turned up in Baghdad just before the Anglo-American invasion in 2003, the kind of folk we professional reporters make fun of. Tree huggers, that kind of thing. Now I wish I had met him because – looking back over the history of that terrible war – Hurndall’s journals (soon to be published) show a remarkable man of remarkable principle. “I may not be a human shield,” he wrote at 10.26 on 17 March from his Amman hotel. “And I may not adhere to the beliefs of those I have travelled with, but the way Britain and America plan to take Iraq is unnecessary and puts soldiers’ lives above those of civilians. For that I hope that Bush and Blair stand trial for war crimes.”

Hurndall got it about right, didn’t he? It wasn’t so simple as war/no war, black and white, he wrote. “Things I’ve heard and seen over the last few weeks proves what I already knew; neither the Iraqi regime, nor the American or British, are clean. Maybe Saddam needs to go but … the air war that’s proposed is largely unnecessary and doesn’t discriminate between civilians and armed soldiers. Tens of thousands will die, maybe hundreds of thousands, just to save thousands of American soldiers having to fight honestly, hand to hand. It is wrong.” Oh, how many of my professional colleagues wrote like this on the eve of war? Not many.

We pooh-poohed the Hurndalls and their friends as groupies even when they did briefly enter the South Baghdad electricity station and met one engineer, Attiah Bakir, who had been horrifyingly wounded 11 years earlier when an American bomb blew a fragment of metal into his brain. “You can see now where it struck,” Hurndall wrote in an email from Baghdad, “caving in the central third of his forehead and removing the bone totally. Above the bridge of his broken nose, there is only a cavity with scarred skin covering the prominent gap…”

A picture of Attiah Bakir stares out of the book, a distinguished, brave man who refused to leave his place of work as the next war approached. He was silenced only when one of Hurndall’s friends made the mistake of asking what he thought of Saddam’s government. I cringed for the poor man. “Minders” were everywhere in those early days. Talking to any civilian was almost criminally foolish. Iraqis were forbidden from talking to foreigners. Hence all those bloody “minders” (many of whom, of course, ended up working for Baghdad journalists after Saddam’s overthrow).

Hurndall had a dispassionate eye. “Nowhere in the world have I ever seen so many stars as now in the western deserts of Iraq,” he wrote on 22 February. “How can somewhere so beautiful be so wrought with terror and war as it is soon to be?” In answer to the questions asked of them by the BBC, ITV, WBO, CNN, al-Jazeera and others, Hurndall had no single reply. “I don’t think there could be one, two or 100 responses,” he wrote. “To each of us our own, but not one of us wants to die.” Prophetic words for Tom to have written.

You can see him smiling selflessly in several snapshots. He went to cover the refugee complex at Al-Rowaishid and moved inexorably towards Gaza where he was confronted by the massive tragedy of the Palestinians. “I woke up at about eight in my bed in Jerusalem and lay in until 9.30,” he wrote. “We left at 10.00… Since then, I have been shot at, gassed, chased by soldiers, had sound grenades thrown within metres of me, been hit by falling debris…”

Hurndall was trying to save Palestinian homes and infrastructure but frequently came under Israeli fire and seemed to have lost his fear of death. “While approaching the area, they (the Israelis) continually fired one- to two-second bursts from what I could see was a Bradley fighting vehicle… It was strange that as we approached and the guns were firing, it sent shivers down my spine, but nothing more than that. We walked down the middle of the street, wearing bright orange, and one of us shouted through a loudspeaker, ‘We are International volunteers. Don’t shoot!’ That was followed by another volley of fire, though I can’t be sure where from…”

Tom Hurndall had stayed in Rafah. He was only 21 where – in his mother’s words – he lost his life through a single, selfless, human act. “Tom was shot in the head as he carried a single Palestinian child out of the range of an Israeli army sniper.” Mrs Hurndall asked me to write a preface to Tom’s book and this article is his preface, for a brave man who stood alone and showed more courage than most if us dreamed of. Forget tree huggers. Hurndall was one good man and true.

If you are interested in the book, you can find it here.