Another Report From PC* 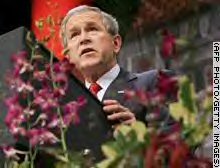 U.S. President George W. Bush was locked out of the Singapore meeting room and struggled through dense foliage to find his podium set up well outside the conference center late Thursday afternoon. North Korean military attaches disavowed any involvement in the episode. “But I have to tell you, that is one gullible dude,” said Lt. Kim Do Sun of the PDRK army. “I think he was looking for a snipe. That’s what he said when they found him the next day,” added Lt. Kim. 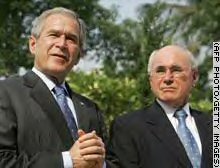 U.S. President George W. Bush said today he was surprised to learn that Vietnam does not support his efforts in Iraq. “Heck,” we woulda won here in Vietnam if we’d stayed,” said Bush. Reporters at the scene said Bush then seemed puzzled at the lack of positive response to his “woulda, coulda, shoulda” statement from Hanoi officials, some of whom had fought the US during the devastating 10-year US-Vietnam war.