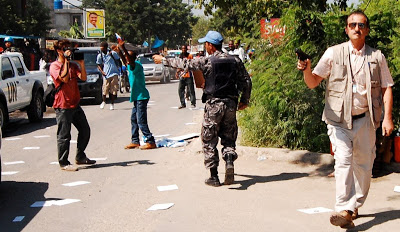 Above, MINUSTAH soldier points his gun at former Austin activist/independent journalist Ansel Herz in Port-au-Prince, Haiti, on October 15, 2010, at a demonstration against the renewal of MINUSTAH, the UN peackeeping mission. Photo from Gaentantguevara / Flickr.

For more about photo see sidebar story below.

Port-au-Prince fears the worst
as cholera spreads in Haiti

PORT-AU-PRINCE — Days after an outbreak of cholera began in Haiti’s rural Artibonite region [see story below], killing at least 200 people, there are now five confirmed cases of cholera in the busy capital city.

The cases “do not represent spread of the epidemic” because they originated in central Haiti, according to a bulletin circulated by Haiti’s UN peacekeeping mission with the heading “Key Messaging,” obtained by IPS.

“The fact that these cases were picked up and responded to so fast demonstrates that the reporting systems for epidemic management we have put in place are functioning,” it concludes.

Residents of the capital city are not so confident. “It’s killing people — of course, I’m scared. We’re in the mouth of death,” 25-year-old Boudou Lunis, one of 1.3 million made homeless by the quake living in temporary settlements, told the Miami Herald.

Radio Boukman lies at the heart of Cite Soleil, an impoverished slum crisscrossed by foul trash-filled canals where cholera could be devastating. The station has received no public health messages for broadcast from authorities, producer Edwine Adrien told IPS on Saturday, four days after reports of cholera-related deaths first emerged.

At a small, desolate camp of torn tents nearby, a gleaming water tank is propped up on bricks. Camp-dwellers said it was installed by the International Organization for Migration last week, more than nine months after the January earthquake damaged their homes.

But it’s empty because no organization has filled it with water. “We need treated water to drink,” a young man named Charlot told IPS matter-of-factly.

Cholera, transmissible by contaminated water and food, could be reaching far beyond the capital city. There are suspected cases of the disease in Haiti’s North and South departments, according to the Pan-American Health Organization, as well as confirmed cases in Gonaives, the country’s third largest city.

In Lafiteau, a 30-minute drive from Port-au-Prince, Dr. Pierre Duval said he had stabilized two cholera-infected men in the town’s single hospital, but could not handle more than six more patients. One died yesterday. All of them came from St. Marc, near the epicenter of the epidemic.

The main hospital in St. Marc is crowded with the infected. Supplies of oral rehydration salts were spotty when he arrived Friday after rushing from Port-au-Prince, American medic Riaan Roberts told IPS.

“We first talked to some lady from the UN who told us, ‘Oh I have to go to a meeting, I’ll mention your names, but just come back tomorrow,’” he said. “These microcosms of operational logistics are just beyond them.”

Roberts said a Doctors Without Borders team quickly put his skills to use, adding, “[The UN] is so top-heavy with bureaucracy that they can’t effectively react to these small outbreaks which quickly snowball and spread across an area.”

Buses and tap-taps filled with people speed in both directions on the dusty highway connecting the Haiti’s stricken central region to Port-au-Prince. There are no signs of travel restrictions or checkpoints near the city.

At a Friday meeting convened by the Haitian government’s Ministry of Water and Sanitation, “there were conversations around shutting down schools and transportation routes,” said Nick Preneta, Deputy Director of SOIL, a group that installs composting toilets in displacement camps.

“But if that’s the conversation now, however many hours after the first confirmed case, it’s already too late,” he continued. “One of the recommendations was to concentrate public health education at traffic centers… there were a lot of no-brainers at the meeting.”

Cholera bacteria can cause fatal diarrhea and vomiting after incubating for up to five days, allowing people who appear healthy to travel and infect others. The medical organization Partners In Health calls it “a disease of poverty” caused by lack of access to clean water.

The Artibonite river, running through an area of central Haiti known as “the breadbasket” for its rice farmers, is considered the likely source of the epidemic after recent heavy rains and flooding. Analysts say the regional agrarian economy has been devastated by years of cheap American imports of rice to Haiti.

Be sure to check the Haiti Documents Index for the latest internal reports, (mostly) free of spin, from officials.

[Ansel Herz, a former Austin activist, is a multimedia journalist and web designer based in Port-Au-Prince, Haiti. This article also appears on Ansel’s blog, Mediahacker, and was distributed by IPS.] 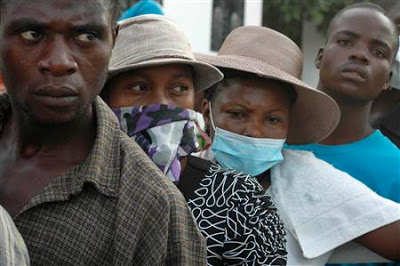 Health workers scramble to keep
cholera out of crowded camps

Some 1.3 million people have lived in makeshift camps throughout Port-au-Prince since the January earthquake devastated the city. Living conditions are “appalling,” according a recent report by Refugees International.

But one bright spot of the multi-billion-dollar relief effort, touted by the United Nations and Haitian President Rene Preval, has been the prevention of the spread of a highly infectious, catastrophic disease.

At least 160 people have died this week [the number has now passed 200] from an outbreak of cholera in the central Artibonite region, according to Zanmi Lasante, the Haitian arm of renowned health organization Partners in Health.

The fear now is that the disease will reach Port-au-Prince [see story above] and wreak havoc in the crowded camps by contaminating the water.

There are already six suspected cases of the illness in the capital city, Monica Ferreira, a Portuguese medic, told IPS on Friday. Her team has operated a health clinic for quake victims since January.

“All defensive countermeasures should immediately focus on Cite Soleil and Lafiteau if they want to save Port-au- Prince,” said Dr. James Wilson of the Haiti Epidemic Advisory System (HEAS).

A HEAS partner reported that a market woman and child died from cholera in the small town of Lafiteau, just 25 kilometres from the capital.

Melinda Miles, director of the Haitian organization KONPAY, told IPS she witnessed a man die of cholera Friday afternoon at the Hospital Centre of the Haitian Academy in Lafiteau. Doctors at the hospital could not be reached for comment before publication.

“We went into the room and he died right in front of us,” she said. “He came from St. Marc. The doctor said there are a lot more patients on their way with cholera.”

The Haitian government says the disease is cholera, a waterborne bacterium that can incubate in bodies for days and suddenly cause death by dehydration. Officials from the Pan American Health Organization, the regional arm of the Geneva-based World Health Organization, said Friday that laboratory tests had confirmed the outbreak.

Authorities have rushed medical resources to St. Marc, about 70 kilometers north of Port-au-Prince, where a single hospital is overcrowded with patients. Villagers who traveled from far away are lying on the floors, hooked up to IV drips, while lines amass outside the gate.

Attempting to cope with the overwhelming patient load, a Doctors Without Borders team has moved from the hospital to construct their own treatment center, spokesperson Petra Becker told IPS.

Other medical teams are gathering information from rural villages to isolate areas where the illness is concentrated and discourage people from moving, she said.

In a blog post on Partners in Health’s website, Chief Medical Officer Joia Mukherjee called cholera “a disease of poverty”. She wrote that loans from the Inter-American Development Bank meant for the development of a public water supply in the Artibonite region were blocked on political grounds during the tenure of President Jean-Bertrand Aristide.

“The international community’s failure to assist the government of Haiti in developing a safe water supply has been violation of this basic right,” Muhkerjee continued.

If the disease reaches Port-au-Prince, the number of victims is likely to skyrocket.

The New York Times reported Friday that cholera cases are surfacing on the island of La Gonave, as well as the areas of Arcahaie and Croix-des Bouquets closer to the capital.

The United Nations and Haitian government are holding emergency meetings in Port-au-Prince to counter the cholera outbreak. Daily truckloads of water delivered by relief group Pure Water for the World to the seaside slum of Cite Soleil have received double the usual chlorination, said Noelle Thabault, the group’s deputy director.

Nesly Louissaint, who lives in Camp Carradeux, an officially recognized camp for thousands of quake victims, received a short text message on his cell phone alerting him to the outbreak of the disease. But no authorities have visited the camp with further information, he said.

It’s not clear what prevention measures have been taken in the capital city. Traffic, schools, businesses and markets were open Friday and the streets appeared to be bustling as usual.

“I have not seen any general information distributed in the streets or camps at this time. I don’t see relief groups out here,” Mark Snyder, a development worker with International Action Ties, told IPS.

“I do see U.N. peacekeeping trucks full of troops, but they are not being utilized to spread information,” he continued. “They’re doing security patrols, which seems like a waste of resources.”

Earlier this week, at least 12 people died when heavy rains flooded some of Port-au-Prince’s displacement camps. Dr. Wilson warns that October is the peak of Haiti’s rainy season, making any further outbreak of the disease more difficult to contain. 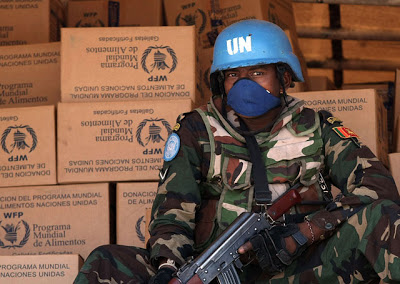 UN peacekeeper to photographer:
‘Shoot me and I’ll shoot you’

When I showed this amazing picture [at top of post] to my friend, after she registered what she was looking at, her eyes went huge while she exclaimed, “Oh my god!” with her hand over her mouth.

The scene is a protest last week in Port-au-Prince. The guy on the left is a clearly unarmed and videotaping journalist from Texas named Ansel Herz, whom I happened to work with when I was in Haiti last month. The uniformed fellow pointing a gun directly at his face is a United Nations peacekeeper.

I didn’t meet many (okay, any) Haitian fans of MINUSTAH, the UN stabilization force that’s been in the country since 2004. I have, for the record, met some MINUSTAH who are definitely good guys and have, for example, helped a woman in labor get to the hospital, and helped stop a man who was trying to kill his wife for refusing to have sex with him.

But the force has also shot civilians. It’s had to have meetings about how not to sexually abuse the Haitian population. In fact, last week’s protest erupted after the UN officially renewed MINUSTAH’s mandate.

Some of the protesters’ complaints, which echo those I heard while in-country, are that MINUSTAH doesn’t actually do anything to protect civilians living in filthy, violent, rape-infested displacement camps, and that the money could be better spent dealing with those issues.

I asked Ansel how he ended up on the business end of a UN gun, just in case there was any kind of conflict or missing context surrounding this photo. Not so much, he says: “Maybe they felt threatened by my camera.”