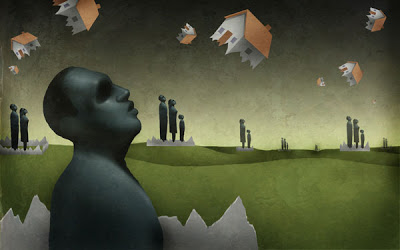 Illustration by Matt Mahurin / The Washington Independent.
U.S. workers in need of rescue:
Report from the epicenter of ‘fraudclosures’

It’s dark as a dungeon way down in the mine…

WEST PALM BEACH, Florida — In all of the economic issues we are dealing with, there is always a “back story, a deeper context” that is usually missing,“disappeared” like those Allende supporters in Chile in the l970’s who wanted to empower workers, not just rescue them, when they get buried in a deep hole.

Most deeper issues go uncovered. Luis Campos, Director of the School of Anthropology at Chile’s Universidad Academia de Humanismo Cristiano, points out, “more buried than the miners themselves, the demands and the rights of the indigenous population continue to be flouted and unrecognized in our country.”

Many unsafe mines worldwide are still at risk from China to Zambia.

Who woulda thunk — certainly not the 1300 “journalists” on the scene — that this mine disaster had its origins in the era when Richard Nixon and Henry Kissinger helped snuff out an emerging popular democracy in the name of protecting what West Palm Beach-based writer and former economic “hit man,” John Perkins, calls the corporatocracy?

Are copper and gold mine owners stronger in relation to workers and have they escaped government regulation because the U.S. engineered a coup in 1973 to destroy the Chilean Left?

Was the San Estaban mining company’s ability to marginalize the union and to disregard input from the workers rooted in American-imposed corporate privilege? In other words, was the trapping of these workers in the first place Richard Nixon and Henry Kissinger’s fault?

The deep hole in that Chile mine was caused in part by a gold rush there — triggered, in turn by, a global financial crisis MADE IN THE USA. It had its counterparts in the U.S., and not just among those 29 miners who perished in the big main mine in West Virginia, last April, a disaster that was supposed to lead to new safety rules that the Republicans have been insidiously blocking.

There is another hole we need to focus on. Millions of us are trapped in our own mines, “underwater” in homes that have lost value with bills we cannot afford, trapped in unemployment, in jobs that are gone and not coming back. Poverty is up and the noxious Newt Gingrich wants to end the food stamps that so many now depend on.

There is no rescue in sight, and the human plight of most of the millions affected takes part outside of media sight.

The gaggle of reporters that covered the mine rescue as a human-interest story — not a political issue — missed the backstory there, just as they miss our own here.

Here in Florida, one epicenter of the housing catastrophe, homeowners were shell-shocked by the latest fraudclosure crime wave. Denise Richardson writes in the Sun Sentinel,

Last I knew, knowingly signing documents fraudulently and using them in a court of law is frowned on, right? It’s criminal, isn’t it? Or is it only criminal if you are a homeowner and not a bank? Seems we’ve gone to great lengths to create and then accept a double standard here.

Perhaps these financial crimes — yes, that’s what they are, crimes — continue to happen because we never addressed the real problems to begin with. You can’t fix a problem you don’t acknowledge. Does anyone believe that was done to help protect the rights of homeowners? Let’s call it what it is: fraud.

An attorney in Deerfield Beach, Florida, representing 3,000 foreclosure victims, has taken hundreds of depositions from bank employees who admit they knew nothing about the details of the evictions they signed off on. Many are now being put down as “Burger King Kids,” yet they know more about real whoppers than this lot knows about real estate. RealtyTrac reports that foreclosure and REO homes accounted for 24 percent of all residential sales during the second quarter? That is huge!

Here in relatively affluent Palm Beach County, homeowners are number one in the state for the average number of loans in foreclosure that are delinquent. It has the fourth highest number of foreclosures, 45,829, with an average delinquency of 623 days. You will recall that Bernie Madoff once turned Palm Beach into a hunting ground for his ponzi scheme.

This situation is worse than we realize, and not just for the people most directly affected. No one knows how much the banks will lose in the class action suits, fines, and legal actions to come. Some think it could be tens of billions, suggesting another bailout may be in the offing, probably by the Federal Reserve Bank.

Paul Krugman questions whether the banks had the right to seize many of these homes, arguing, “The mortgage mess is making nonsense of claims that we have effective contract enforcement — in fact, the question is whether our economy is governed by any kind of rule of law.”

Buried in the Business section, on page B-8 of The New York Times, way down in an article saying the banks may be on the hook for billions, was this very revealing paragraph speaking to a problem that I have been raising for years, making clear the fraud problem is not just with foreclosures.

Inside the investment houses, several traders said nerves were frazzled further by worries that banks could face much bigger mortgage related losses, not from foreclosures, but because of questions about how the money was lent in the first place. If it turns out that mortgages were bundled together and sold improperly, more holders could sue the banks and force them to buy back tens of billions in mortgage-backed securities.

Frazzled nerves so far seem the worst punishment the banksters have tasted. They have just decided to reward themselves with a new round of raises and bonuses worth $144 billion with few criticisms. The Government has meanwhile just “settled” for $73 million with Countrywide, the leading predatory lender. That means that a prosecution of its top executives, the poster boys for mortgage criminality, will be dropped. Notes the website Housing Doom:

Even having to pay $77.5 million, Mozilo still nets $61.5 million, just between November 2006 and October 2007. Maybe “crime doesn’t pay,” but one of the lessons of the housing bust is that fraud does.

What should be done? Webster Tarpley speaks for many in calling for a national moratorium on foreclosures, a course of action rejected by the White House.

The current chaos in home foreclosures is once again the direct responsibility of the zombie bankers themselves, who have neglected all traditional legal and accounting standards concerning the necessary paper trails in their frenzied desire to securitize mortgage loans and make them into toxic derivatives in the form of asset-backed securities and mortgage backed securities. The zombie bankers, already the recipients of $24 trillion of public largess in the form of the various bailouts, have turned out to be incompetent even in the technical aspects of their own thieving racket.

But the chaos in the bankers’ filing systems is nothing compared to the chaos created by the millions of foreclosures they have engineered, based on adjustable-rate mortgages and similar misleading contracts which never should have been legal in the first place. For some time, it has been evident that the defense of the American middle class requires a blanket, orderly, federal freeze (or moratorium) on all foreclosures on primary residences, similar to the New Deal protections offered to family farms by the landmark Frazier-Lemke Act of 1935-1949 during the previous depression.

Ellen Brown, author of Web of Debt, goes further in Yes Magazine, asking if it is “Time to Break Up the Too-Big-to-Fail Banks?”

Popular financial analysts, crippling bank losses from foreclosure flaws appear to be imminent and unavoidable. The defects prompting the “RoboSigning Scandal” are not mere technicalities but are inherent to the securitization process. They cannot be cured. This deep-seated fraud is already explicitly outlined in publicly available lawsuits

There is, however, no need to panic, no need for TARP II, and no need for legislation to further conceal the fraud and push the inevitable failure of the too-big-to-fail banks into the future.

The faux populists of the Tea Party right have been silent on the issue. Glenn Beck dropped all populist pretensions by calling on followers to give money to the Chamber of Commerce so they can better pursue a corporate agenda. One Republican here assured me that Barney Frank caused the whole financial crisis and that he will be tossed out of office in the midterm election. (He didn’t just blame him — he hates him!) At the same time, one right wing website did publish a detailed denunciation of housing fraud.

As depressing as the lack of any real ongoing mass-based populist movement of the left or the right is another reality that The Washington Post finally spills even as millions of Americans buy into the illusion that new politicians can save us while angry voters here in Florida prepare to vote the Tea Party into office.

Let us tell you an Ugly Truth about the economy, a truth that no one in power or who aspires to power wants to share with you, at least until after the midterm elections are over. It’s this: There is nothing that the U.S. government or the Federal Reserve or tax cutters can do to make our economic pain vanish overnight.

So what will it be? More money for the banks to bring them under control, more illegal foreclosures, or some type of justice for homeowners? Will this crisis lead us to demand action to break up these financial behemoths or will we just sit by and watch a new crisis sweep us deeper into our own mines of despair?