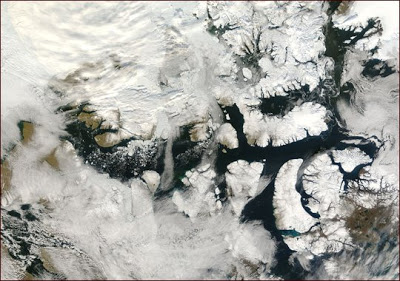 This satellite image shows a portion of Canada’s Northwest Passage largely free of ice, as seen by NASA’s Terra satellite on Sept. 15, 2007. Arctic ice has shrunk to the lowest level on record, raising the possibility that the North Pole will soon experience the first ice-free summer in recorded history. Photo by NASA / AP.
North Pole Meltdown?
By Seth Borenstein / June 30, 2008

There’s a 50-50 chance that the North Pole will be ice-free this summer, which would be a first in recorded history, a leading ice scientist says.

The weather and ocean conditions in the next couple of weeks will determine how much of the sea ice will melt, and early signs are not good, said Mark Serreze. He’s a senior researcher at the National Snow and Ice Data Center and the University of Colorado in Boulder, Colo.

The chances for a total meltdown at the pole are higher than ever because the layer of ice coating the sea is thinner than ever, he said.

“A large area at the North Pole and surrounding the North Pole is first-year ice,” Serreze said. “That’s the stuff that tends to melt out in the summer because it’s thin.”

Preliminary February and March data from a NASA satellite shows that the circle of ice surrounding the North Pole is “considerably thinner” than scientists have seen during the five years the satellite has been taking pictures, NASA ice scientist Jay Zwally said Friday. He thinks there is slightly less than a 50-50 chance the North Pole will be ice-free.

Last year was a record year for ice melt all over the Arctic and the ice band surrounding the North Pole is even thinner now.

There is nothing scientifically significant about the North Pole, Serreze said. But there is a cultural and symbolic importance. It’s home to Santa Claus, after all. Last August, the Northwest Passage was open to navigation for the first time in memory.

A more conservative ice scientist, Cecilia Bitz at the University of Washington, put the odds of a North Pole without ice closer to 1 in 4. Even that is far worse than climate models had predicted, which was 1 in 70 sometime in the next decade, she said.

“I would guess within the next 10 year it would happen at least once,” Bitz said.

Already, figures from the National Snow and Ice Data Center show sea ice in the Arctic as a whole at about the same level now as it was at its low point last year in late June and early July.

The explanation is a warming climate and a weather phenomenon, scientists said.

For the last couple of decades, there has been a steady melt of Arctic sea ice — which covers only the ocean and which thins during summer and refreezes in winter. In recent years, it has gradually become thinner because more of it has been melting as the Earth’s temperature rises.

Then, this past winter, there was a natural weather shift called the Arctic Oscillation, sort of a cold weather cousin to El Nino. That oscillation caused a change in winds and ocean that accelerated a normal flushing of sea ice in the Arctic. That pushed the older thicker sea ice that had been over the North Pole south toward Greenland and eventually out of the Arctic, Serreze said. That left just a thin one-year layer of ice that previously covered part of Siberia.

This entry was posted in RagBlog and tagged Ecology, Environment, Global Warming. Bookmark the permalink.