Are There Real Differences Between Democrats and Republicans? 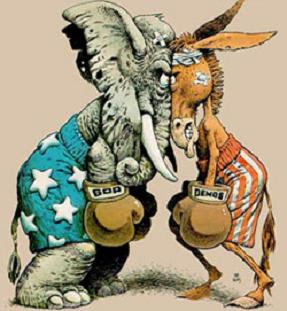 Steve Russell is a former Austin activist and staff writer for the sixties underground newspaper The Rag. He has worked as a lawyer, an elected judge in Travis County (Austin), a writer and a professor. A citizen of the Cherokee Nation, Steve is a frequent contributor to The Rag Blog.

Is there a difference between Democrats and Republicans? Oh, hell yes!

Before I get started, I must recognize that the backbone of the Ragblog is a group of people who have known me very well for a long time—for several, that includes in the Biblical sense—so they know I held office as a Democrat. While I was, since before I held office, a sustaining supporter of the Travis County Democratic Party, I never voted a straight ticket in my life until the last elections, when the Iraq war pushed me to that extreme. When I had a choice, before Iraq took that choice away, I have at times voted Libertarian, Raza Unida, Socialist Workers, and, yes, even Republican.

Lately, though, there have been plenty of classic struggles at the federal level where party has made a difference.

At the Securities and Exchange Commission, Bush appointee Christopher Cox requested “emergency powers” to protect the stock of the privatized mortgage brokers, Fannie Mae and Freddie Mac. Shortly thereafter, he was informed that rule was already in effect to ban the practice that had him exercised, so-called “naked shorts” —short selling stock you do not own or have not made arrangements to borrow for the purpose. When Republicans took over the SEC, the rule became politically moribund. Another rule, the “uptick rule” — requiring that short-selling be preceded by a rise in stock price — was flatly repealed. The purpose is to keep big players from hammering a stock down for their own profit.

In anticipation of retirement, I have taken up some stock trading, but I do not sell short. It amounts to betting on someone else’s misery—entrepreneurs, workers, small stock holders—which offends me as much as insurance policies, which involve betting on my own misery. However, I understand that short selling serves a function in the market, just as insurance does. That I do not choose to participate is idiosyncratic.

When informed that he had the power, did Christopher decide to enforce the law? Well, not exactly. He announced that the naked short rule would henceforth be enforced in the case of stock in Fannie and Freddie as well as an announced list of behemoth investment banks. Not in the case of all stocks, or even all banks!

Who does the non-enforcement of short-selling rules benefit? Hedge funds, minimum price of buying in, $25,000 for a small one. If you are not worth a million dollars, hedge fund managers will not give you the time of day. They control enough investing power to create a downward spiral for a stock and then short into it, reaping millions while the average working stiff’s mutual fund takes the hit.

Need I add that the Republicans wanted to shift the Social Security program into the stock market? Where we would allegedly have more control over our own retirement funds. At the same time, the same folks were making it easier for the big players to manipulate the stock market to the disadvantage of small players.

The Housing Bill. As I was driving home this evening, I heard on the news that Senate Republicans were infuriated that they had staked out positions against the Democratic-tinged bill that passed the House, only to have Bush withdraw his veto threat and cut their legs off.

The swill these people signed on to sell is that the United States can afford to bail out Fannie and Freddie but not to undertake the rescue of individuals who have been sucked into subprime mortgages. That is not an easy sell.

When the bill passed both houses with veto-proof majorities, Bush credited McCain, who had not bothered to vote on final passage after failing to stop it!

Energy Policy. You might have heard that the government subsidies for solar and wind power have not been reenacted because of “partisan bickering.” This is so. It goes as follows.

The Republicans favor renewable energy subsidies but as a price for their votes demand that current favorable treatments for oil and gas exploration be continued.

The Democrats claim that is both economically and environmentally irresponsible. We don’t get off the oil teat by subsidizing oil exploration. All these battles could be dismissed as “partisan bickering,” but in each case one party seems to be on the side of ordinary folks. Current events look like FDR v. Herbert Hoover.

There is no revolutionary electoral party. Revolution is not the purpose of voting, as I explained to my friends when I determined to run for office back in 1976. The fights the Democrats are in right now are fights worth having. There’s a right side and a wrong side. I’m voting for the right side, which in this case is the left side.