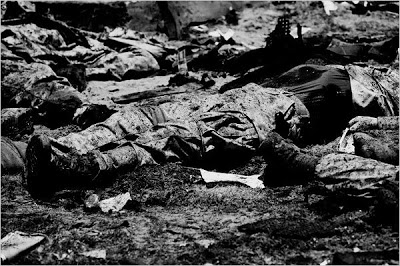 Zoriah Miller, the freelance photographer who took this image and others of marines killed in a June 26 suicide attack and posted them on his Web site, was subsequently forbidden to work in Marine Corps-controlled areas of Iraq. Maj. Gen. John Kelly, the Marine Corps commander in Iraq, is now seeking to have Mr. Miller barred from all United States military facilities throughout the world. Mr. Miller has since left Iraq.
Photo by Zoriah Miller.
‘Public portrayal of the war is being sanitized’
By Michael Kamber and Tim Arrango / July 26, 2008

BAGHDAD — The case of a freelance photographer in Iraq who was barred from covering the Marines after he posted photos on the Internet of several of them dead has underscored what some journalists say is a growing effort by the American military to control graphic images from the war.

Zoriah Miller, the photographer who took images of marines killed in a June 26 suicide attack and posted them on his Web site, was subsequently forbidden to work in Marine Corps-controlled areas of the country. Maj. Gen. John Kelly, the Marine commander in Iraq, is now seeking to have Mr. Miller barred from all United States military facilities throughout the world. Mr. Miller has since left Iraq.

If the conflict in Vietnam was notable for open access given to journalists — too much, many critics said, as the war played out nightly in bloody newscasts — the Iraq war may mark an opposite extreme: after five years and more than 4,000 American combat deaths, searches and interviews turned up fewer than a half-dozen graphic photographs of dead American soldiers.

It is a complex issue, with competing claims often difficult to weigh in an age of instant communication around the globe via the Internet, in which such images can add to the immediate grief of families and the anger of comrades still in the field.

While the Bush administration faced criticism for overt political manipulation in not permitting photos of flag-draped coffins, the issue is more emotional on the battlefield: local military commanders worry about security in publishing images of the American dead as well as an affront to the dignity of fallen comrades. Most newspapers refuse to publish such pictures as a matter of policy.

But opponents of the war, civil liberties advocates and journalists argue that the public portrayal of the war is being sanitized and that Americans who choose to do so have the right to see — in whatever medium — the human cost of a war that polls consistently show is unpopular with Americans.

Journalists say it is now harder, or harder than in the earlier years, to accompany troops in Iraq on combat missions. Even memorial services for killed soldiers, once routinely open, are increasingly off limits. Detainees were widely photographed in the early years of the war, but the Department of Defense, citing prisoners’ rights, has recently stopped that practice as well.

And while publishing photos of American dead is not barred under the “embed” rules in which journalists travel with military units, the Miller case underscores what is apparently one reality of the Iraq war: that doing so, even under the rules, can result in expulsion from covering the war with the military.

“It is absolutely censorship,” Mr. Miller said. “I took pictures of something they didn’t like, and they removed me. Deciding what I can and cannot document, I don’t see a clearer definition of censorship.”

The Marine Corps denied it was trying to place limits on the news media and said Mr. Miller broke embed regulations. Security is the issue, officials said.

“Specifically, Mr. Miller provided our enemy with an after-action report on the effectiveness of their attack and on the response procedures of U.S. and Iraqi forces,” said Lt. Col. Chris Hughes, a Marine spokesman. 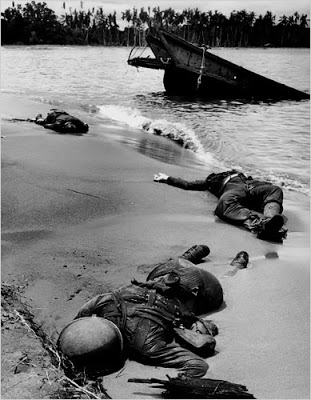 After heavy censorship of images of American casualties during World War I and the beginning of World War II, President Franklin D. Roosevelt lifted the restrictions. Soon after, in September 1943, LIFE magazine published this image of three dead American soldiers and their landing craft on Buna Beach, New Guinea after a Japanese ambush. Photo by George Strock/Time & Life Pictures/Getty Images.
News organizations say that such restrictions are one factor in declining coverage of the war, along with the danger, the high cost to financially ailing media outlets and diminished interest among Americans in following the war. By a recent count, only half a dozen Western photographers were covering a war in which 150,000 American troops are engaged.

In Mr. Miller’s case, a senior military official in Baghdad said that while his photographs were still under review, a preliminary assessment showed he had not violated ground rules established by the multinational force command. The official, who spoke on condition of anonymity because the investigation was ongoing, emphasized that Mr. Miller was still credentialed to work in Iraq, though several military officials acknowledged that no military unit would accept him.

Robert H. Reid, the Baghdad bureau chief for The Associated Press, said one major problem was a disconnection between the officials in Washington who created the embed program before the war and the soldiers who must accommodate journalists — and be responsible for their reports afterward.

“During the invasion it got a lot of ‘Whoopee, we’re kicking their butts’-type of TV coverage,” he said.

Now, he said the situation is nuanced and unpredictable. Generally, he said, the access reporters get “very much depends on the local commander.” More specifically, he said, “They’ve always been freaky about bodies.”

The facts of the Miller case are not in dispute, only their interpretation.

On the morning of June 26, Mr. Miller, 32, was embedded with Company E of the Second Battalion, Third Marine Regiment in Garma, in Anbar Province. The photographer declined a Marine request to attend a city council meeting, and instead accompanied a unit on foot patrol nearby.

When a suicide bomber detonated his vest inside the council meeting, killing 20 people, including 3 marines, Mr. Miller was one of the first to arrive. His photos show a scene of horror, with body parts littering the ground and heaps of eviscerated corpses. Mr. Miller was able to photograph for less than 10 minutes, he said, before being escorted from the scene.

Mr. Miller said he spent three days on a remote Marine base editing his photos, which he then showed to the Company E marines. When they said they could not identify the dead marines, he believed he was within embed rules, which forbid showing identifiable soldiers killed in action before their families have been notified. According to records Mr. Miller provided, he posted his photos on his Web site the night of June 30, three days after the families had been notified.

The next morning, high-ranking Marine public affairs officers demanded that Mr. Miller remove the photos. When he refused, his embed was terminated. Worry that marines might hurt him was high enough that guards were posted to protect him.

On July 3, Mr. Miller was given a letter signed by General Kelly barring him from Marine installations. The letter said that the journalist violated sections 14 (h) and (o) of the embed rules, which state that no information can be published without approval, including material about “any tactics, techniques and procedures witnessed during operations,” or that “provides information on the effectiveness of enemy techniques.”

“In disembedding Mr. Miller, the Marines are using a catch-all phrase which could be applied to just about anything a journalist does,” said Joel Campagna, Middle East program coordinator for the Committee to Protect Journalists.

New embed rules were adopted in the spring of 2007 that required written permission from wounded soldiers before their image could be used, a near impossibility in the case of badly wounded soldiers, journalists say. While embed restrictions do permit photographs of dead soldiers to be published once family members have been notified, in practice, photographers say, the military has exacted retribution on the rare occasions that such images have appeared. In four out of five cases that The New York Times was able to document, the photographer was immediately kicked out of his or her embed following publication of such photos.

In the first of such incidents, Stefan Zaklin, formerly of the European Pressphoto Agency, was barred from working with an Army unit after he published a photo of a dead Army captain lying in a pool of blood in Falluja in 2004.

Two New York Times journalists were disembedded in January 2007 after the paper published a photo of a mortally wounded soldier. Though the soldier was shot through the head and died hours after the photo was taken, Lt. Gen. Raymond T. Odierno argued that The Times had broken embed rules by not getting written permission from the soldier.

Chris Hondros, of Getty Images, was with an army unit in Tal Afar on Jan. 18, 2005, when soldiers killed the parents of an unarmed Iraqi family. After his photos of their screaming blood-spattered daughter were published around the world, Mr. Hondros was kicked out of his embed (though Mr. Hondros points out that he soon found an embed with a unit in another city).

Increasingly, photographers say the military allows them to embed but keeps them away from combat. Franco Pagetti of the VII Photo Agency said he had been repeatedly thwarted by the military when he tried to get to the front lines.

In April 2008, Mr. Pagetti tried to cover heavy fighting in Baghdad’s Sadr City. “The commander there refused to let me in,” Mr. Pagetti said. “He said it was unsafe. I know it’s unsafe, there’s a war going on. It was unsafe when I got to Iraq in 2003, but the military did not stop us from working. Now, they are stopping us from working.”

James Lee, a former marine who returned to Iraq as a photographer, was embedded with marines in the spring of 2008 as they headed into battle in the southern port city of Basra in support of Iraqi forces.

“We were within hours of Basra when they told me I had to go back. I was told that General Kelly did not want any Western eyes down there,” he said, referring to the same Marine general who barred Mr. Miller.

Military officials stressed that the embed regulations provided only a framework. “There is leeway for commanders to make judgment calls, which is part of what commanders do,” said Col. Steve Boylan, the public affairs officer for Gen. David H. Petraeus, the top commander in Iraq. For many in the military, a legal or philosophical debate over press freedom misses the point. Capt. Esteban T. Vickers of the First Regimental Combat Team, who knew two of the marines killed at Garma, said photos of his dead comrades, displayed on the Internet for all to see, desecrated their memory and their sacrifice.

“Mr. Miller’s complete lack of respect to these marines, their friends, and families is shameful,” Captain Vickers said. “How do we explain to their children or families these disturbing pictures just days after it happened?”

Mr. Miller, who returned to the United States on July 9, expressed surprise that his images had ignited such an uproar.

“The fact that the images I took of the suicide bombing — which are just photographs of something that happens every day all across the country — the fact that these photos have been so incredibly shocking to people, says that whatever they are doing to limit this type of photo getting out, it is working,” he said.