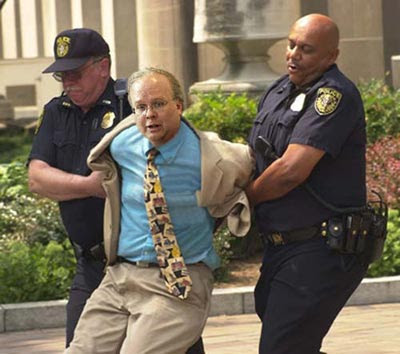 You didn’t read about this in the mainstream media – wouldn’t want to encourage anyone, would they? This news, however, is certainly huge. Four Iowans were arrested on July 25th for attempting to make a Citizen’s Arrest of Karl Rove in Des Moines at the Wakonda Country Club.

Rev. Chet Guinn, a Methodist minister, and Catholic Workers Edward Bloomer, Kir Brown, and Mona Shaw were arrested at the gate of the Country Club and cited for trespassing. They were citing Iowa Code provisions for Citizen’s Arrests and Federal Statute violations against Rove.

Karl Rove refused to cooperate with a Congressional subpoena in the Valerie Plame CIA leak investigation. He’s also been linked to a federal bribery case against former Governor Don Siegelmen. He was given a subpoena to testify before a House Committee on the matter and refused to testify, citing “executive privilege.” A Congressional subcommittee voted that executive privilege does not protect him from testifying; however he has still not come forward and the matter is unresolved.

Rove had a “strategic communications” task force that helped write and coordinate speeches for senior Bush administration officials that emphasized the supposed nuclear threat of Iraq. Rove was involved in administration energy policy meetings at the same time that he held more than $100,000 of stock in Enron, Boeing, General Electric, and Pfizer.