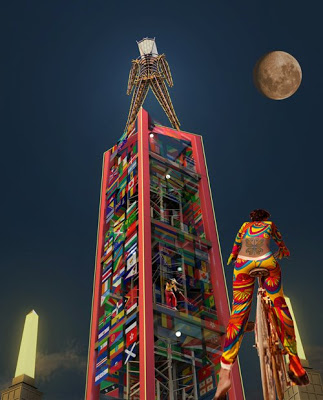 Obelisk with cutaway view of interior. Design by Rod Garrett and Larry Harvey. Illustration by Jack Haye and Rod Garrett.

The Burning Man project has grown from a small group of people gathering spontaneously to a community of over 48,000 people.

Every year, tens of thousands of participants gather to create Black Rock City in the Black Rock Desert of Nevada, dedicated to self-expression, self-reliance and art as the center of cummunity. They leave one week later, having left no trace.

Burning Man is much more than just a temporary community. It’s a city in the desert, dedicated to radical self reliance, radical self-expression and art. Innovative sculpture, installations, performance, theme camps, art cars and costumes all flower from the playa and spread to our communities and back again.

The ritual highlight of the event is the ceremonial burning of the massive Burning Man structure.

This year’s art theme is about nationality, identity and the nature of patriotism. One species of the patriotic urge conflates the nation state with mass identity. Governments, as actors on a worldwide stage, become a surrogate for self, a vast projection of collective ego. And yet, there is another type of patriotic feeling that attaches us to place and people, to a home and its culture. Both these feeling states (and their attendant ironies) are relevant to this year’s theme.

In 2008, leave narrow and exclusive ideologies at home; forget the blue states and the red; let parties, factions and divisive issues fall away, and carefully consider your immediate experience. What has America achieved that you admire? What has it done or failed to do that fills you with dismay? What is laudatory? What is ludicrous? Put blame aside, let humor thrive, and dare to contemplate a larger question: What can America, this stumbling, roused, half-conscious giant, still contribute to the world?

This year Burning Man will stand atop an obelisk. This imposing monument, emblazoned with the images of flags, will represent the countries of the world. Ranging from Canada to Chad, from Brazil to Burundi, from Vatican City to the Republic of China, these emblems will shine brightly in the night, gleaming like illuminated gems that stud a giant jewel box. A double-helix, like a strand of DNA, will form a staircase. Twining around the axis of this tower, it will spiral through a series of viewing platforms. The topmost tier will stand directly underneath the Burning Man.

Hal speaking to Dewey, Malcolm in The Middle

Anyone embarking on this path will encounter hundreds of fellow participants – many of whom come to Black Rock City from around the world. Indeed, in order to discover the flag of any particular county amid this welter of imagery, it will be necessary to inspect the flags of many other nations. Each of these may be imagined as a dream no less radiant or precious than the rest. Each country is a source of culture and identity; yet each may also be regarded as a glimmering illusion: a sovereign artifact, an arbitrary puzzle piece, an isolated fragment on a map.

You making haste on decay: not blameworthy; life is good, be it
stubbornly
long or suddenly
A mortal splendor: meteors are not needed less than mountains:
shine, perishing republic.

The 20th Century was, in many ways, the American century. At the close of World War II, the government of the United States created an enduring peace with its opponents that was almost without precedent. It embodied the ideals on which America was founded: democracy, equality, freedom and opportunity – a vision of unbounded hope for an improving future. It seemed natural for Americans to think their country was a master model for the world.

This post-war period also produced an unprecedented prosperity. America now hovered at the apex of its worldly fortunes. Never before had wealth been so broadly distributed throughout society. For many people – though, most certainly, not all – this was the era of what came to be called the American dream. Home ownership, a well paid job, a college education, the prospect of security in one’s old age: these blessings beckoned to a growing middle class.

The past does not repeat itself, but sometimes it rhymes.

Today, Americans appear to live amid the tarnished squalor of a second Gilded Age. By nearly every measure, America has become a more unequal society. A mere one percent of the population now controls a third of the nation’s wealth. Education, health care and home ownership – these now escape the reach of those who thought they were the middle class. Forty years of heedless mass-consumption have turned dreams into delusions. America’s awash in debt. Embroiled in a wayward war, its citizens are told to shop.

Many feel that the United States is now adrift. Its allies, once so numerous, begin to fall away and chart an independent course. Its citizens, more tellingly, have lost their faith in progress. Polls indicate they now believe their children can’t expect a better future. They distrust the institutions of government, of finance, and the corrupting power of large corporations. And yet, the native traits of any culture are deep-rooted. Freedom, opportunity, inventiveness, the power to transform oneself: these values and a love of self-expression still endure.

Perhaps, it’s time Americans began to face themselves. Maybe, it’s also time that they began to listen to other countries of the world. All of us are immigrants to Black Rock City. What can we dream America to be? As always, any work of art by anyone, regardless of our theme, is welcome at the Burning Man event. If you are planning to do fire art or wish to install a work of art on the open playa, please see our Art Guidelines for more information.