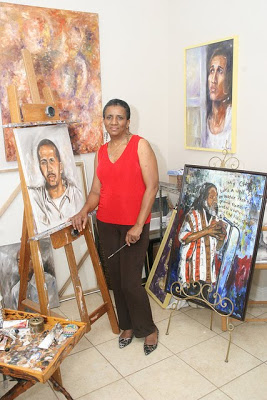 Sheila Phipps with some of her work from the exhibit, “Every Portrait Tells a Story.” Photo from Loop21.

Every portrait tells a story

Sheila Phipps does portraits of young men she believes were convicted of crimes they did not commit. Her son, New Orleans rapper ‘Mac,’ is serving 30 years for manslaughter and her art proclaims his innocence.

NEW ORLEANS — As the date approaches for the 10th anniversary of her son’s conviction, Sheila Phipps is hard at work completing a powerful and moving series of paintings that tell the stories of wrongly-convicted young men in the U.S. prison system.

Phipps, a self-taught artist in New Orleans, has been selling and displaying her work for more than 20 years. Her son is Mckinley “Mac” Phipps, the legendary New Orleans rapper who was convicted of manslaughter in 2001 and sentenced to 30 years in prison.

In collaboration with the Innocence Project, Phipps contacted prisoners across the nation and researched their cases. Once she read enough evidence to convince her of their innocence, she communicated with the prisoner and then painted an image of them.

Now, Phipps is unveiling a series of 10 works, for a show called the Injustice Exhibition. Her use of color and framing varies with the inspiration, ranging from muted portraits to bright explosions of color, often capturing small details like focusing on a subject’s feet or hands. In the portrait of her son she highlights the gentle features of his face.

Seeing her son locked away caused Phipps’ to use her art in another way, as both activism and as release.

“To be honest I didn’t know what else to do,” says Phipps. “I’ve had four lawyers. One of the lawyers said she don’t even think the judges read the appeals we’ve written.” The hope is that her art will wake up people to the lives being wasted in prison — not only her sons’, but all lives.

“Art is a way to express yourself,” she says. “So why not express yourself by raising awareness?” Phipps started painting in the 1980s, using art as a way to relax from the strain of raising her six children. She quickly caught the attention of Sandra Berry who runs the Neighborhood Gallery, a New Orleans arts institution. “Her work is absolutely wonderful,” says Berry. “There is a sensitivity and a mother-like compassion in her work that she brings to every subject.”

The subject for whom Phipps’ compassion is most concentrated, her son “Mac,” started rapping at the age of seven. At 11, his talents won him a contest held at New Orleans’ Superdome, for which he won a record deal. He released his first album, featuring production work by former Cash Money Records artist Mannie Fresh — who would later develop the sound that made Cash Money Records famous — at age 12. 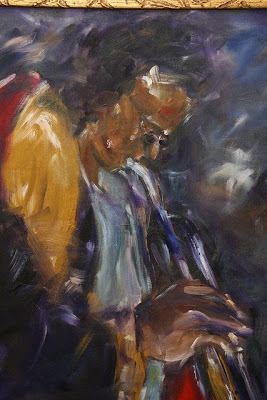 Painting by Sheila Phipps from “Every Portrait Tells a Story.” Image from Loop21.

By the age of 22, Mac had released two more albums, and was one of New Orleans’ most popular rappers. His collaborations included tracks with Master P, Snoop Dogg, and Mystikal. According to Phipps, Mac stayed grounded, despite his success. “He’s a very humble person,” she says. “He doesn’t even smoke and drink, if you can believe that in this day and time.”

On February 22, 2000, after a concert in Louisiana, a fight broke out and a young man named Barron C. Victor Jr. was shot and killed. Phipps, who helped book her son’s shows, was there that night. According to her, Mac was nowhere near the altercation. “Mac was in the corner signing autographs,” she says. “When the shots we’re fired, he hit the floor like everyone else.”

According to Phipps, Mac ran out of the club, but then came back in with a gun drawn. The reason? Phipps says he was trying to rescue her. “He heard the gunshot and didn’t know what was going on,” she says. “All he knew is, I gotta get my momma out of there.”

Although ballistics tests showed that Mac’s gun (which he had a license to carry) had never been fired, he was charged with second degree murder. Another man came forward and said that he had killed Victor, but prosecutors said they found his story unreliable. Mac was sentenced to 30 years behind bars. It was his first offense.

“Before this happened to my son, I thought when people went to jail that they were supposed to be there,” says Phipps. “Going to trial, I see how these DA’s twist stories just to get a conviction. Then they go home and sleep at night while innocent people are just sitting there behind bars.”

Mac’s story continues to inspire outrage. A documentary about his case, called “The Camouflaged Truth,” is currently in post-production, and last year Dee-1, an up-and-coming conscious New Orleans rapper with several videos in rotation on MTV networks, organized a benefit concert to raise awareness about Mac’s case. For Sheila, every day that Mac is locked up is a struggle, but she plans to continue fighting. “I want to travel with the exhibit,” she says. “Just to shine light on the prison system and how they railroad people. I hope that this will open up a lot of people’s eyes.”

View photos of Sheila’s work here: “Source Every Portrait Tells a Story.” For more about Mac and his case, see Source http://www.free-mac.org. You can contact Sheila at sheilaphippsstudio@yahoo.com

[Jordan Flaherty is a journalist and staffer with the Louisiana Justice Institute. His award-winning reporting from the Gulf Coast has been featured in a range of outlets including The New York Times, Al Jazeera, and Argentina’s Clarin newspaper. His new book is FLOODLINES: Community and Resistance from Katrina to the Jena Six. He can be reached at neworleans@leftturn.org, and more information about Floodlines can be found at floodlines.org. This article was also published at Loop21. Find more articles by Jordan Flaherty on The Rag Blog.]