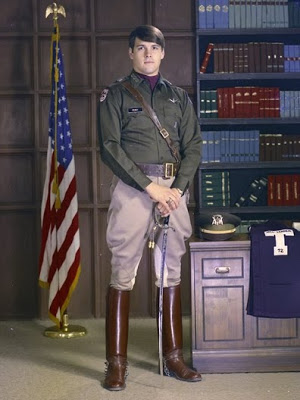 Sure Michele Bachmann and Sarah Palin are batshit crazy. But Rick Perry as a brown-shirted cadet and cheerleader at Texas A&M University… whoa!

When Rick Perry arrived at Texas A&M University in 1968, it was at the end of a summer in which Soviet troops crushed the Prague Spring, protesters at the Democratic National Convention were met by a police riot and the United States reeled from the twin assassinations of Martin Luther King Jr. and Robert F. Kennedy. With its conservative culture, military tradition and focus on agriculture, few places in the U.S. might have seemed more insulated from the prevailing currents of the age… Perry was elected a yell leader — an esteemed male cheerleader who has traditional responsibilities at major athletic events — and social secretary for his class. And he was exceedingly loyal to the corps, which he credited with giving him the discipline to get an animal sciences degree — his 2.5 grade point average wasn’t high enough to go the veterinary route — and join the Air Force. 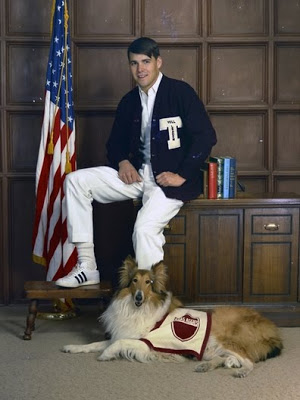