AT&T: Talking to the Voice-Lady 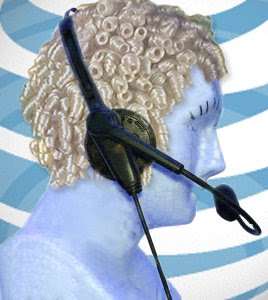 ‘I could only imagine how much money AT&T was saving by forcing their counter clerks to talk to the voice-lady all day like robots, while making customers take a number and wait.’
By Larry Ray / The Rag Blog / November 28, 2008

I called AT&T a while ago to learn how to buy one of their “Go-Phones.” I found the 800 number and placed a call. Human beings no longer answer your call to AT&T. A recorded female voice answers and greets you as if it were a human. It asks you to respond by talking to “her,” speaking words into your phone from her fixed list of questions. The voice recognition routine becomes tedious and irritating real quickly and the voice lady’s options of words to say had nothing to do with Go-Phones.

The voice-lady had no sense of humor. With an insistent tone, she replied “I’m sorry, I didn’t get that,” and she repeated the fill-in-the-voice-blank question. Amazed at the absurdity of talking to a computer hard drive, I replied in cartoon character voices, even urban street gang black mangled English until finally, in a slightly scolding tone, the voice-lady said, “Please hold and I will connect you with an AT&T Agent.” Finally a human!

But eventually being connected to a live AT&T agent, opens up a whole new set of problems. The real person did not have the Go-Phone information and asked me to hold so they could “connect me, with that department.” Guess what? I got connected to the voice-lady again. It is the voice-lady or no sale.

So, customer service is now the voice-lady on a hard drive somewhere in a large computer cabinet. AT&T must assume that America will willingly turn themselves into manipulated robots happily dealing with this maddening, frustrating and totally un-customer- friendly waste of time.

I finally managed to escape the voice-lady by doing something I had read about on the internet, repeatedly pressing #0#0#0#0. This got me to another real human and he eventually actually helped me place my Go-Phone order. But it required a sneaky back door trick to bypass the voice-lady. The phone arrived promptly but the charger plug did not fit into the phone. I forced my way past the voice-lady once more, and eventually got a human who directed me to a local AT&T store nearby where I could get a phone that worked. “No problem, sir, just go out there and they will make an in-kind exchange.”

The Go-Phone store, formerly Cingular, was located in a large shopping center. It was set up like a circular airline ticket counter with uniformed clerks positioned in little spaces around it like orange suited carousel horses. Customers are made to stop at a pedestal just inside the front door and sign in, noting the time you got there. Then you wait in line for one of the carousel horses to become free.

I finally got to the counter, told the fellow that I was here for an “in-kind exchange.” He had no idea what I was talking about. I explained that I had been told to come here to exchange the phone for one that would properly charge. I demonstrated how the little flat rectangular plug just wallowed around in the phone charger receptacle. He fiddled around and eventually found the proper charger for my phone. I asked him if that would fix the problem, because I thought I was supposed to exchange the whole telephone in its original packaging. “Yeah, this should work. We don’t carry that model phone, and we don’t do exchanges. We just sell and activate new phones.”

It was like an orange-hued Twilight Zone. No two people seem to have the same information. Then I then noticed that all the sales agents were using their speaker phones to talk to the AT&T voice-lady! I was astounded. I asked if they didn’t have direct lines, and was told in a resignedly tired manner that no, they have to use the same 1-800 numbers all customers have to use. I could only imagine how much money AT&T was saving by forcing their counter clerks to talk to the voice-lady all day like robots, while making customers take a number and wait.

Americans are already being trained to “Press 1 for English.” Now, to do business or get help we must repeat words to a soulless, humorless recording. Fad-driven cell phone users already easily accept paying two bucks for a rude and raucous ‘ringtone,’ and are oblivious to the monthly bill for mindlessly chatting, texting and doinking around on the internet squinting at the tiny little screen. Just put it on the credit card. If this steadily growing monthly financial obligation doesn’t bother them, talking to voice-lady eventually might seem normal. But it will never seem normal to a huge number of us out here who know better, and it sure as hell shouldn’t be called customer service.

This entry was posted in Rag Bloggers and tagged Existential Angst, Technology. Bookmark the permalink.